This Monday saw the start of the China Investment Forum in Prague, billed as a key platform for building future business ties. Organisers, the Czech-Chinese Chamber for Bilateral Cooperation and Prague Castle alike hope it will spur future Chinese investment. This, after the Czech and Chinese presidents met in Prague earlier in the year and signed numerous economic accords in Prague, which the Czech head of state, Miloš Zeman, estimated as worth 95 billion crowns (3.2 billion crowns). 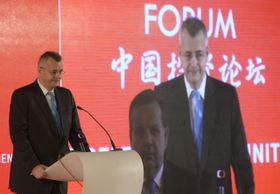 Jaroslav Tvrdík, photo: CTK Some politicians are still waiting for the trickle of initial investments to broaden into the promised boom. Finance Minister Andrej Babiš has been sceptical, telling Czech TV in the past he was still waiting to see direct Chinese investments which would have a clear beneficial impact on the state budget. The head of the Czech-Chinese Chamber for Bilateral Cooperation, Jaroslav Tvrdík (a former defense minister and former chairman of the board of Czech Airlines) outlined key sectors being discussed at the forum, at venues such as Prague’s Žofín and Prague Castle itself, were tourism, energy, electronic commerce, food production and additional investment opportunities.

Not long ago, Foreign Minister Lubomír Zaorálek suggested that the tumblers were slowly falling into place, saying that the state agency for boosting investment and business ties, CzechInvest, was negotiating about around a dozen projects worth around 22 billion crowns and that all the ongoing negotiations going on would come to a total of around 60 billion crowns, although at the time he didn’t want to speculate further. The head of CzechInvest, Karel Kučera, said on Czech TV this week in a programme dedicated solely to the China Investment Forum that there was an understandable delay before deals agreed were finalized. In his view, China could be one of the top foreign investors in the Czech Republic in the coming years.

“We expect that China, as one of the biggest world economies, will get onto the list of the Top 5. Whether it will be within the next five years is difficult to say: it depends whether we will see a really large investment project like we saw in the past with Japan and South Korea. That kind of investment by China is certainly the case in other European countries annually such as neighboring Germany.” Karel Kučera, photo: archive of CzechInvest Czech TV pointed out, however, that Chinese investment in the Czech Republic so far, despite the previous fanfare, is still only a trickle, an overall half a percent of all investments in the Czech Republic. From the point of view of CzechInvest, in Q2 Chinese investment had been 11 percent putting it is second or third place – but 11 percent of deals brokered by the state inward investment agency. The agency’s Karel Kučera expressed confidence that the China Investment Forum would bring new opportunities which would unfold only in the coming months.

“The investment cycle is about 12 months long, longer than many people realise. It takes a while before new contracts are fulfilled, not unlike when you buy a new car. If it doesn’t happen to be a showroom model, there too you have a waiting period.”

The chairman of the Czech-Chinese Chamber for Bilateral Cooperation, Jaroslav Tvrdík, shares the optimism, saying he expected a record volume of Chinese investments in the Czech Republic both this year and next.