The centre of Prague will see the opening of a unique but temporary open air market introduced on plots of land across from the city’s Masaryk train station and Prague’s Florenc. Named Manifesto, the market will consist of some 20 transport containers specially-modified as design boutiques, bookshops, street food stalls and more. 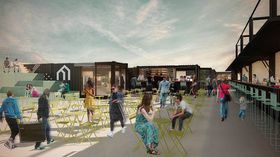 Manifesto, visualisation: Elvira Islas & Manifesto The site will open on June and will remain for about two years, according to news site iDnes.

The unused land will be developed by Penta for a business district megaproject (designed by the renowned late architect Zaha Hadid, reports iDnes, but in June it will serve as a site for a hip if temporary outdoor market, showing how as yet undeveloped plots can be revitalized in both the short or long term.

Manifesto, loosely inspired by London’s Boxpark, will feature hip bars, restaurants, ice cream stands, burger joints, with an emphasis on locally-produced ingredients and suppliers, as well as booksellers and a design boutique. The temporary market, organised by the NGO reSITE, will also have an accompanying cultural program, including screenings, concerts, theatrical presentations, DJs, and more. Organisers say the cost of the event will be covered by rental paid by the firms represented. The head of Penta Real Estate for the Czech Republic Petr Palička told iDnes that Manifesto would help the public rediscover that part of town.

According to iDnes, reSITE is planning on moving the alternative marketplace to another Prague district, Prague 6 after its time at Masaryk train station runs out.

At the start of the year Prague was gearing up for another record tourist season, but as the coronavirus pandemic hit, the city’s tourist…