Agriculture Ministry: Czech exporters may lose hundreds of millions of crowns due to Russian food embargo

Czech food exporters are bracing for the impact of Russia’s sweeping ban on food imports introduced in response to EU sanctions over Ukraine. In terms of agricultural commodities, Russia is the Czech Republic’s most significant export destination outside of the EU. Czech exports of food and agricultural commodities to Russia last year totalled 2.4 billion crowns and in particular dairy producers are now scrambling to find new outlets for their goods. 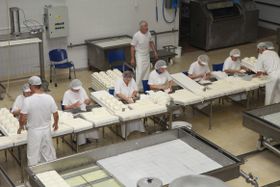 Madeta, photo: archive of Czech Government According to a report published by the Ministry of Agriculture on Monday Czech food exporters may suffer loses to the tune of 250 to 300 million crowns in the next four months alone as a result of the Russian embargo. Dairy producers are particularly at risk. The South Bohemian dairy producer Madeta felt the bite of the sanctions almost immediately – its trucks were turned back from the Russian border just hours after Moscow announced the food embargo. Fifteen tons of blue cheese bound for the Russian market headed back for the Madeta factory gates where they were speedily repackaged for sale in the Czech Republic. Although the goods was successfully sold to local supermarket chains, finding future outlets may not be so easy. In recent years Madeta had been increasing its exports to Russia and this year alone it was planning to sell 200 million crowns worth of dairy products to the country –predominantly milk, butter and cheeses. The company has now scaled down production in its factory in Český Krumlov – which produces blue cheese deliveries for Russia – from six days to just three a week and is scrambling to find new outlets. The firm’s director says lay-offs are a last-ditch solution.

The baby-food manufacturer Hamé which sells 20 percent of its products on the Russian market is more fortunate – it has a Russia-based factory where it has now increased production to the limit to minimize possible losses.

Among the leading Czech food export articles to Russia are beer, milk, butter, cheeses, eggs, ice-cream, meat, poultry, red meat, tinned meat products and poppy seeds and biscuits. According to Dana Večeřová the spokeswoman of the Czech Agrarian and Food Chamber the impact of the Russian food embargo may be much higher than that currently anticipated due to heightened competition from producers across the EU and an expected drop in the price of food products as a result of the glut caused by Moscow’s embargo.

Expert groups have been set up at the trade and agriculture ministries to consider possible forms of aid – including a survey of alternative export destinations - but any form of government intervention or compensation would first have to be approved on a European scale.

The European Commission announced last week that it would pay fruit and vegetable farmers across the EU 125 million euros to help soften the impact of the embargo, but it is not yet clear what the conditions of the aid package are and to what measure Czech farmers may benefit.