Willa Cather and the Bohemians of the prairies

If you have ever wondered about how 19th century Czech settlers lived on the Great Plains of the American Midwest, there is no better way to find out than by reading the novels of Willa Cather. David Vaughan looks at the Bohemian side of a classic American novelist who is surprisingly little known here in the Czech Republic. 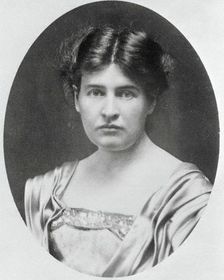 Willa Cather When Willa Cather was growing up in small-town Nebraska in the 1880s, it was still frontier country. The broad prairies, for centuries home to Native American tribes, were being settled by a curious cross section of European migrants and longer established American settlers. Cather’s life spanned 75 years and she wrote novels on many aspects of American life and history, but she remains best loved for her trilogy of novels set in the rural Nebraska of her childhood: “O Pioneers!” written in 1913, “The Song of the Lark” of 1915, and most famously of all “My Ántonia”, which in 1918 firmly established Cather’s reputation as a novelist. It is also the novel that focuses most strongly on the life of Czech immigrant families [incidentally, the accent on the first letter of the heroine’s name is not a misinterpretation of Czech diacritics, but Cather's reminder to American readers that the stress in Czech names should be on the first syllable!]. Charles University student Míša Plicková has just completed a thesis on “My Ántonia” and we met to talk about some of these Bohemian aspects of the novelist. She began by telling me more about Willa Cather’s early life.

“Her autobiography was quite an important issue in her books, since she drew on her knowledge of all the communities she had the opportunity to spend time with. She was born in Virginia, but she stayed there only for nine years. Then her family moved to Nebraska.”

She was born into a family that was very well established and had been farming for six generations. They were old American settlers, weren’t they? Willa Cather House in Red Cloud, Nebraska “Yes, they were exactly this, so when they moved to Nebraska they had resources which other people, who came there from Europe as immigrants lacked. “

And Nebraska was very different…

“Yes, it was this tremendous new space, open to all new possibilities, but also there was no social order, no pre-established values or community network. So it was all waiting to be filled with the new orders, imaginations, of the newcomers.”

And for Willa Cather, who was nine years old at the time, it was the beginning of an adventure.

“Yes, she was open to all those new fascinating elements, and she was also quite an adventurous girl, so she made many friends with people from the different communities, including the Czech community. “

And here we get to the reason why we’re talking about an American writer in Czech Books, because a major part of her work draws from her childhood experiences, growing up in Nebraska, and many of the families there were migrants from Bohemia. 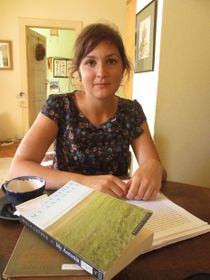 Míša Plicková, photo: David Vaughan “Yes, they were, and Cather – when she was a little girl – had a friend whose name was Annie Pavelka, so she was of Bohemian descent, and her life story was a substantial inspiration for ‘My Ántonia’, which is one of her most striking books.”

The novel gives us fascinating insights into the type of life that people were leading in these rural communities at the time, and also into the interaction between the old and new settlers. Here is a passage from “My Ántonia”, which describes the Bohemian girls in this town Black Hawk – the name in itself is interesting, because it is Indian, marking a further aspect of the book. You see how the newcomers were different from the old settlers.

The Bohemian and Scandinavian girls could not get positions as teachers, because they had had no opportunity to learn the language. Determined to help in the struggle to clear the homestead from debt, they had no alternative but to go into service. Some of them, after they came to town, remained as serious and as discreet in behaviour as they had been when they ploughed and herded on their father's farm. Others, like the three Bohemian Marys, tried to make up for the years of youth they had lost. But every one of them did what she had set out to do, and sent home those hard-earned dollars. The girls I knew were always helping to pay for ploughs and reapers, brood-sows, or steers to fatten.

One result of this family solidarity was that the foreign farmers in our county were the first to become prosperous. After the fathers were out of debt, the daughters married the sons of neighbours--usually of like nationality-- and the girls who once worked in Black Hawk kitchens are to-day managing big farms and fine families of their own; their children are better off than the children of the town women they used to serve. 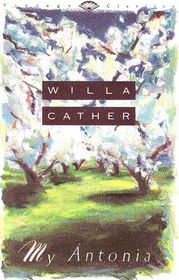 “In this extract we can clearly see the division between the old settlers, mostly of English descent, and the newly arrived settlers, who were confronted with so many difficulties, starting with the climatic challenges – to put it mildly. “

“Exactly. It’s difficult to adjust yourself to those two extremes, and they had virtually no resources and no money. And America in general is based on the assumption that there are those groups which are regarded as the ‘other’ of the nation. The ‘other’ in this context is applicable also to the immigrants, the newcomers, the European immigrants. If we explore this concept, it is also applicable to African Americans, Native Americans and women in general, who are all present in the narrative. African Americans and Native Americans make a brief appearance in the book, and the heroine, Ántonia, is both a woman and an immigrant.”

And, as we heard in that extract, Willa Cather also had a sense that these immigrant groups were very dynamic. Because they were less governed by the established rules of the society as it already existed, the Bohemian farmers had a habit of becoming prosperous more quickly.

“Yes, that’s true. They were both more inventive and more willing to succeed, because they had no other option than to work hard and try to make their own way in this very competitive context. Also, they didn’t have so strictly to obey the social rules, which were necessary for the identity of those old settlers.” 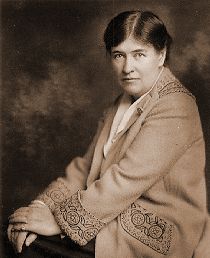 Willa Cather And I understand that the Czech immigrants – or Bohemians, as they are always called in the book – were considered to be particularly different. Was it because, unlike the Swedes or the Norwegians, they were Catholic or because they were Slav and therefore a little more distant from the Anglo-Saxon Protestant majority?

“We somehow get the sense, at least in ‘My Ántonia’, because this is the book where the Czech protagonists get the most space in the novel, that they are something like a ‘Bohemian’ influence in the broad sense of the word, since they embody those slightly disruptive elements in the community, while the Norwegians and other Scandinavian immigrants are more stable and don’t figure in the community as such an element.”

“Yes, and I think it is a very important element. When she was pursuing her studies at Nebraska University, she adopted the persona of ‘Will’, and if you see her pictures, it’s quite difficult to put a label on her appearance, since she used to wear male clothes and she fell in love with her friend. And then she moved back into the closet – we don’t know whether it’s true that she was closeted, but she decided to refashion herself according to expectations and she started to act as she was expected by society to act, and she came to terms with her role as a woman. But then she had close relationships with a couple of women, either on an artistic level or a more personal level. It’s difficult to extricate the two.” 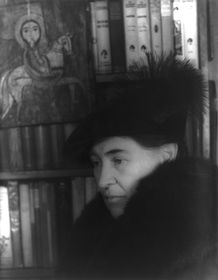 Willa Cather, photo: Carl Van Vechten In “My Ántonia” she chooses to write from the perspective of a male narrator, Jim Burden.

“Yes, it is a very important fact that the first person narrator is Jim Burden, who is trying somehow to grasp his life narrative, and in the foreword there is also another voice, which is presumably the voice of Cather herself, and it is a female voice. So this interaction somehow destabilizes the gender question, or gender issue, in the book. “

Here is another short extract from “My Ántonia”. This time we see Jim Burden’s reaction to one of the classic elements of Czech cooking – mushrooms.

That night, while grandmother was getting supper, we opened the package Mrs. Shimerda had given her. It was full of little brown chips that looked like the shavings of some root. They were as light as feathers, and the most noticeable thing about them was their penetrating, earthy odour. We could not determine whether they were animal or vegetable.

“They might be dried meat from some queer beast, Jim. They ain't dried fish, and they never grew on stalk or vine. I'm afraid of 'em. Anyhow, I shouldn't want to eat anything that had been shut up for months with old clothes and goose pillows.” She threw the package into the stove, but I bit off a corner of one of the chips I held in my hand, and chewed it tentatively. I never forgot the strange taste; though it was many years before I knew that those little brown shavings, which the Shimerdas had brought so far and treasured so jealously, were dried mushrooms. They had been gathered, probably, in some deep Bohemian forest....

So there we have Americans confronted with the strange Czech tradition of cooking with wild mushrooms, clearly not something that was familiar to most Americans at the time when the novel is set, in the second half of the 19th century.

Finally, I’d like to ask you, given that Willa Cather writes about Czechs in “My Ántonia” and in other novels, how much interest is there in her writing and have all her novels all been translated into Czech?

“Well, it’s quite strange that most of her novels were not translated yet or there are some translations which are quite old, so it is quite striking that she’s not known at all.“

And you’ve just completed a fascinating thesis on Willa Cather. I have the impression that you would probably like to come back to her at some time…

And let’s hope that one result in the long run will also be that more of her work will appear in Czech translation.

“It would be nice to see her work translated – or retranslated.” 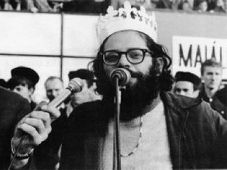 Allen Ginsberg and other immoral menaces

Fifty years ago, on 1 May 1965, annual student festivities in Prague to mark the joys of spring culminated in the American Beat poet…

In today’s Arts my guest is Brian Callaghan, a Prague-based author of a new action/adventure thriller called The Seeds of Cain. Inspired…

In today’s Arts my guest is Brian Callaghan, a Prague-based author of a new action/adventure thriller called The Seeds of Cain. Inspired…