Rabindranath Tagore: an Indian poet who inspired a Czech generation

This year is the 150th anniversary of the birth of the great Bengali poet, Rabindranath Tagore, the first non-European to win the Nobel Prize for Literature in 1913. Tagore has a special significance for Czechs, as we find out in this week’s Czech Books. Rabindranath Tagore's bust in Prague, photo: ŠJů, CC 3.0 license I’m in Thákurova Street in Prague 6, home to the city’s Technical University. The street gets its name from the Indian poet Rabindranath Tagore, and I’m standing by a bust of Tagore put up to mark his close friendship with the pre-war Czechoslovak Republic. It is a characteristic portrait, depicting him in his later years, with a long beard, just as he is known from many photographs. Dr Dušan Zbavitel is the Czech Republic’s foremost scholar of Tagore’s poetry. He points to the huge breadth of Tagore’s gifts.

“Tagore was not only a poet and a writer. He was a Renaissance personality in this respect: that he was a great composer – he founded a new style of Indian music called Rabindrasangit, which is still popular in India, he was a great painter, he was also a pedagogue and so on. He even founded an agricultural school in India to teach the Indian peasants new methods of agriculture.”

Tagore’s poetry is highly lyrical, with a strong spiritual thread, although it would be inaccurate to describe him as a mystic poet. He came from a prominent Bengali family, and his writings draw from many sources, including Bengali classical and rural tradition, but he was also educated in the European classics. Humanism runs through his work, along with a pervading sense of optimism, two qualities that appealed strongly to many writers, artists and intellectuals in the newly emerging Czechoslovak Republic after World War I.

Where the mind is without fear and the head is held high
Where knowledge is free
Where the world has not been broken up into fragments
By narrow domestic walls
Where words come out from the depth of truth
Where tireless striving stretches its arms towards perfection
Where the clear stream of reason has not lost its way
Into the dreary desert sand of dead habit
Where the mind is led forward by thee
Into ever-widening thought and action
Into that heaven of freedom, my Father, let my country awake. Dušan Zbavitel, photo: David Vaughan These lines come from Tagore’s most famous collection Gitanjali, in the poet’s own translation. Dušan Zbavitel reminds us that Czech interest in Indian culture and language goes back long before Tagore, as far as the early days of the so-called Czech national revival.

“The knowledge of Indian languages goes back a very long way in the Czech Lands. For instance, some of the so-called 'enlighteners' of the beginning of the 19th century knew and studied Sanskrit. Dobrovský, Jungmann and others considered it their duty to get acquainted with Sanskrit. So the tradition of interest in India was very old and very vivid in our country. I don’t know the reason – nobody knows – but India was very sympathetic for Czech people as a country under foreign rule. It was an English colony until 1947 and the Czechs were under Austria-Hungary until the First World War, so there were mutual sympathies, and our people also very much followed the fight of India for freedom – for political freedom.”

The father of Indian studies in Prague was Vincenc Lesný, who, in the first half of the twentieth century, built up the study of Indian languages at the Charles University, along with Moriz Winternitz from Prague’s German University. Lesný became a good friend of Tagore, and both he and Winternitz were invited to India to lecture at the Visva Bharati university that Tagore set up in Bengal. Lesný was also responsible for two visits that Tagore paid to Prague in the 1920s. Among the many Czechs who went to hear him speak was the composer Leoš Janáček. Dušan Zbavitel picks up the story. 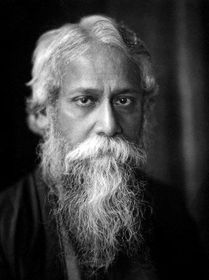 Rabindranath Tagore “He came twice to Prague. He came in May 1921 only to Prague, because his visit was rather short, but during this short visit he delivered two public lectures. One was in the Lucerna ballroom and it was very well received. That’s when Janáček met him. At the time, Janáček wrote a column for the paper Lidové noviny, and he put down the intonation of Tagore’s recitation of Bengali poetry. And when Tagore came for the second time in 1928, in our National Theatre two of his plays were performed and in the German Theatre they also performed one of his plays.”

Tagore’s language inspired Janáček to compose one of his best known choral pieces, the “Potulný šílenec” (The Wandering Madman) for mail choir and soprano solo, which puts a story from Tagore’s book "The Gardener" to music.

A wandering madman was seeking the touchstone, with matted locks
tawny and dust-laden, and body worn to a shadow, his lips
tight-pressed, like the shut-up doors of his heart, his burning
eyes like the lamp of a glow-worm seeking its mate.
Before him the endless ocean roared.
The garrulous waves ceaselessly talked of hidden treasures,
mocking the ignorance that knew not their meaning.

Janáček was not the only Czech composer to take inspiration from Tagore. Several of Josef Bohuslav Foerster’s “Milostné písně” (Love Songs) also put his poetry to music.

There is little evidence of Tagore himself having taken particular interest in Czech music and literature, but he was very actively interested in political life in Czechoslovakia, especially in the face of growing extremism in Europe.

“He was considered by nearly everybody here as an ambassador of peace and understanding between nations. This was his message. He was the first president of the Indian League against Fascism, a great enemy of Nazism and of Hitler and Mussolini. That’s also why his works were not allowed to be published during the Second World War, when we had the Protectorate here.”

On Christmas Eve 1937, the celebrated Czech writer Karel Čapek sent message over the airwaves to Tagore in Santiniketan in Bengal, and at the same time the inventor of the arc-lamp, František Křižík sent a message to Einstein in Princeton – a gesture of solidarity among democratic nations - all broadcast live to Czechoslovak radio listeners. This is the only surviving recording of Čapek’s voice.

“To you, who are the harmonious voice of the East, we send our greetings to Santiniketan. We send our greetings from Czechoslovakia, where the snow is already falling, from an anxious Europe in the Western world, where even the most highly developed nations are unable to shake each other’s hands as brothers would. Regardless of the great distance between our countries, however, we stretch out our hands in brotherly love to you, the poet of wisdom, to you, quiet Santiniketan, to you great India, to you mighty Asia, even to this Asia which is now being destroyed by arms discovered by the West. At this very moment, when cannons are roaring against the east and west of our common continent our Western democracy feebly calls out to you at the turning point of the year: ‘Long live the world, but let it be a world of equal and free people.’”

Tagore himself sent a telegram in return, which was read out in English on air.

“Friends in Czechoslovakia. In the terrible storm of hated violence raging over humanity, accept the goodwill of an old idealist who clings to his faith in the common destiny of the East and West and all people on the Earth.”

When, a few months later, Czechoslovakia was carved up under the Munich Agreement, Tagore spoke out in defence of the country.

“At the time of the Munich Crisis in 1938, he wrote an open letter to the world’s press, which was also published in English and American newspapers, in which he condemned Nazism and also Western democracies for betraying us. He expressed in this letter his hope that our country will regain its freedom. Unfortunately, by the time this letter reached this country, the German influence was so strong that the letter was not allowed to be published and Czech readers were not able to read it until 1945, after the liberation of Czechoslovakia.”

Rabindranath Tagore did not live long enough to see Czechoslovakia liberated from Nazi Germany. He died in Calcutta on August 7 1941, at the age of 80. After the war, Czechoslovakia’s communist regime was initially deeply suspicious of his legacy, but thanks largely to the persistence of Dušan Zbavitel, some of Tagore’s poems were republished in the mid 1950s, and interest in the great Indian writer has continued ever since. Now 86, Dr Zbavitel continues to write about the poet who first inspired his love for India when he was a teenager, and to translate his poetry. 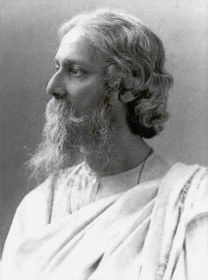 Rabindranath Tagore “In translating his poetry, one great advantage has been that the structure of the Czech language and the Bengali language is very similar. We have very similar sounds and also the structure of the verbs is very similar. So it is not so difficult to translate it. I even did an experiment: Tagore turned many of his poems into songs, so I tried to translate these very songs in such a way that they can be sung to the same melodies. But of course Indian music, even Tagore’s music, is different from European music and never got many listeners in Europe.”

We don’t have a recording of any of Tagore’s songs being sung in Czech, but we'll end the programme with the voice of the great poet himself, singing in his native Bengali on a crackly, but haunting recording. 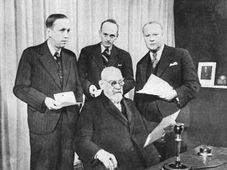 Czechoslovakia and India through the archives

In this, the last programme in our series to mark Radio Prague’s 80th birthday, we travel eastwards looking at links between India… 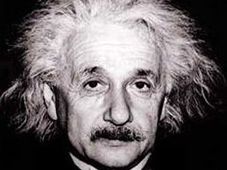 Christmas Eve 1937: A message of goodwill from Albert Einstein

It was exactly seventy years ago this week, at 11 pm on a cold and snowy Christmas Eve in 1937, that Czechoslovak Radio attempted…