Pavol Rankov: a Slovak novelist found by Czechs in translation

When the Slovak writer Pavol Rankov published his novel “It Happened on September the First (or Whenever)” in 2009, it came just after the Slovak national football team had beaten the Czech Republic. In an enthusiastic review, one Czech critic suggested that the same had now happened in literature and that the Rankov’s literary achievement had put his Czech contemporaries to shame. When the author came to Prague earlier this week, David Vaughan took the opportunity to talk to him about a remarkable novel that speaks volumes about a part of the world that has seen too much history. 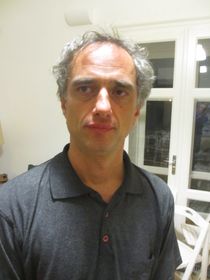 Pavol Rankov, photo: David Vaughan It may seem strange to be talking about a Slovak novel in a programme called “Czech Books”, but Pavol Rankov’s brilliant story crosses the borders of Central Europe as they have shifted in the course of the twentieth century. A Czech-Slovak-Hungarian-Jewish love story, the novel follows the fates of four young people from Levice, a small town in southern Slovakia, where nations and languages have always overlapped. The novel covers the thirty years from 1938 to 1968, a period when the town found itself in the midst of national and political struggles that wrecked the lives of ordinary people. There is drama and tragedy, but this is also a book with a lightness of touch and a sense of place, character and humour that make it hard to put down. I asked Pavol Rankov how the book first came about.

“It all started with my father’s memories, things he’d say in our day-to-day conversations. He’d talk about things like his childhood friend who moved to Brazil and became a millionaire, trading coffee. And he’d always end by saying, ‘But nobody’s interested in any of that these days.’ But it was so fascinating that I said I’d try to write down his memories. And the book began to grow around these stories.”

Which brings us to the problem of where history ends and fiction begins.

If I were to summarize the plot of the book, it sounds almost formulaic. Three young lads all admire the same girl. One of the boys is Czech, another Hungarian, the third is Jewish, and the girl is Slovak. It seems almost too formulaic for a novel, but one of the things that I really admire about the book is how you manage to tell the story in a way which flows very naturally.

“This formula, having three boys of different nationalities and a girl of yet another nationality, does sound a bit artificial, and when I started writing the book, I said to myself that this was a danger I needed to avoid. I didn’t want it to end up being pre-programmed or ‘politically correct’.”

Peter, Honza and Gabriel were at the swimming pool. Shading their eyes against the afternoon sun, they sat with their legs dangling from the low concrete wall. From time to time they would spit out the thick saliva that builds up in dry mouths. It was the first day of school and they had no homework, so they were taking advantage of the free afternoon to sit and admire their classmate, Mária Belajová. The little beauty was sitting nearby with her parents and younger brother Jurko.

Usually she would wear her hair tied in a large ponytail, but now, as it dried, her hair was flowing thick and free in all directions.

Honza had a habit of reading his sister’s romantic novels. The latest was called Trembling Hearts. Peter and Gariel had got used to their friend’s habit of drawing from these writers to describe Mária’s beauty. They themselves could not have put it so succinctly.

Mária reached into a bag for a plum and with her long fingers popped it into her mouth. 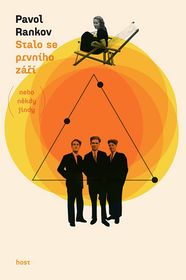 I think that in another interview you have said at some point that it has been the fate of this part of Central Europe that there have been too many different nations, too many different languages, all in a very small area, all overlapping. This is part of what the book is about – the inability of all these groups of people to live peacefully alongside one another.

“It’s interesting that from around the beginning of the Second World War in this part of Europe far greater emphasis began to be put on nationality, and even though we then had forty years of communism, which talked of proletarian internationalism, we still see each other first and foremost through our nationality. When I started writing down my father’s memories, I’d ask if a particular family was Slovak or Hungarian, and he’d sometimes reply, ‘You can’t really say. You know, we didn’t use to define ourselves in that way.’ It’s a paradox that after forty years of communism and twenty years of globalization, we still haven’t gone back to what it was like before the war, when people didn’t see each other primarily as members of an ethnic group.”

One of the pleasures of reading the book is the mixture of different languages that creep into the story. You have Slovak, Czech, Hungarian, bits of German, Russian, even modern Hebrew, all coming into the story in one way or another. This all makes the story feel very authentic. At times I found myself wondering what a particular sentence in Hungarian meant.

“I use several languages in the book, because I thought that, in the context of the time, the language tells us more than if I’d translated it into my mother tongue. I don’t actually speak Hungarian or German, so I’m using languages I don’t actually know.” 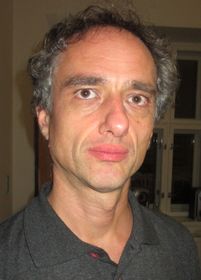 Pavol Rankov, photo: David Vaughan “Yes, in Slovakia ten percent of the population speaks Hungarian. They are ethnic Hungarians, but I don’t think this has to be a problem. It only becomes a problem when elections are coming up, but there isn’t really a solution. I hope Hungarians will remain Hungarian and Slovaks Slovak. The only solution is not to politicize the issue.”

To what extent does it enrich culture in Slovakia, having that encounter of two different languages, two different ways of life and of two different literatures and literary traditions? In your book I have the feeling that the bit of Hungarian paprika adds spice to the Slovak story.

“Certainly, the Hungarian paprika gives a flavour to Slovak life and adds a certain dynamism. I think it enriches the society to be confronted with such a sizable minority, which also includes excellent writers like Lajos Grendel or Péter Hunčík, who are respected even in Hungary itself. They both clearly state that they feel at home in Slovakia. I have two daughters, who are twelve and fourteen, and I’ve noticed how this phenomenon broadens their horizons. It brings up all sorts of complications, but I think that’s how you learn how the world works.”

Because of the period in which it is set there are many Czech elements in the book. One of the main heroes is Czech and part of the book is set in Brno.

“Yes, given that the book deals with the period when Czechoslovakia existed, I think it’s right to take the Czech angle, the Czech point of view, into consideration. European history tends to be very nationalistic. Each nation writes its own history in its own language, so I tried to look at history, as written by both sides.”

Here in the Czech Republic the book has been published in Czech translation. This is something that in the time of Czechoslovakia simply did not happen, as it was taken for granted that Czechs could read Slovak and Slovaks could read Czech. Was it a strange feeling for you to see your book translated into Czech?

When I was reading the book in Czech translation, it didn’t strike me as being foreign in the way that I think a translation of a Polish or a German novel would.

“I think that twenty years after the separation of Czechoslovakia it’s high time we started realizing that these are two independent countries, two independent and separate nations. We’ve now been living apart for as long as we lived together in the pre-war Czechoslovakia. Despite the nostalgia, I think they are two different worlds now. The fact that they are similar is a bonus. It means that we can build bridges. We have to accept that we are separate and find the best possible ways for our two different cultures to communicate.”