Neither here nor there: 1980s Prague through the eyes of Marsha Kocábová

The 1980s was the last decade of communist rule in Czechoslovakia. Political oppression at that time was not as fierce as in the beginning of the totalitarian regime in the 1950s, but still there was no end in sight. Society was demoralized and constantly bullied by the authorities, people mostly cared about themselves more than anything else, and bureaucracy permeated every aspect of life. In short, not a happy time. One of the very few Americans living here in those days was Marsha Kocábová, who came to Prague in 1982. Her book ‘Neither Here nor There’, which has just come out in Czech, describes life in the Czech capital.

“I left behind all color as I went over the border. It was dark, very late, and I was beginning to catch on to the reality that Michael was always late and that he changed plans as often as he made them. We got to the border at Rozvadov and after leaving the border with its “last chance” shops, we entered the poorly-lit, barren-looking Czech border control. The uniforms of the Czech border guards were the color of green gone bad. A green you could not find in nature except maybe in dead moss. The material was also cheap and unpleasant-looking. The hats had an excruciatingly offensive shape that only Russians could come up with and they had a red band around them. I couldn’t imagine anyone looking attractive like that, and our idea of a man looking good in a uniform seemed so silly here.

Marsha came to Prague and married Michael Kocáb, an avant-garde rock musician whose band Pražský Výběr irritated the communist authorities so much that they banned them for some five years. The couple met in Germany, and Marsha Kocábová says she had no idea of what to expect once she crossed the Iron Curtain.

”I should have, having spent a day in East Berlin, and having gone through the metro stations and train stations. But it was just a day or so, and it didn’t quite stick with me, and I guess I forgot how-barren looking it was.”

Most people here could not travel, especially to the West. Did you find that they knew what was going there not just in the terms of freedom but also of material things?

“That was surprising. I mean, we never thought so much of poverty as of the system of control and of the country being a police state. So the poverty did surprise me and finally you realize as you go what money in a country means. What also surprised me was how little Czechs knew of America. They thought everybody was rich and they didn’t think there was any violence. They believed the total opposite of the propaganda which wasn’t right either.”

It was the shopping; the hostility of the people and above all the authorities; the poor quality of food and other consumer goods and even of the environment and the air people breathed. Then there was the medical care – Marsha’s two daughters were born during communism. She would spend a lot of time in the park with her kids – and that’s where she learnt a lot.

“The park was my school. School of communism and of Czech culture. We sat on the benches, while the children played, and I learned so much. I started to notice how, when the mothers talked about girls they made comments like “She’s very efficient, I taught her to do this and that….She can already…..”. With boys it was “He likes to eat this or that, he doesn’t like to ….”. Total opposite from our upbringing. In the South, a girl had to be pretty and charming, and the boy handy. Not the other way. It was shocking and threw me off-balance, but explained a lot. First of all the fixation of mothers on their sons, and the dominance of the women. Women were emotionally dependent on men and at the same time bossed them. They were stronger and the men more spoiled. I was beginning to figure it out, but it was a puzzle. Girls were taught everything. 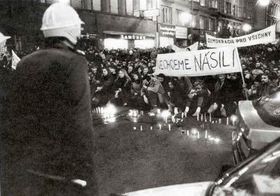 November 1989 After seven years of life in a communist country, the regime fell apart in November 1989. Today it seems all went smooth and nice but Marsha’s memories of the time are very different. Michael became a leading member of the group that was negotiation the transfer of power with the communist leadership. Here’s another extract from the book.

“I am really upset. Today we heard that I and the girls need to be very careful. That I shouldn’t drive, that I should watch out for trucks behind me and that I should leave the country for awhile. Then Chicago came and said that M shouldn’t sit on a toilet without looking in the bowl, not eat in strange restaurants, not walk alone in the streets. Okay, now as scared as I am I cannot take the toilet bowl seriously. I cannot imagine being killed by an exploding toilet bowl. Mama would have hysterics laughing. But I can’t tell her any of this. They are scared to death. People just stop by and say, “I know someone who knows someone really high up and he said”…..”I know a guy who knows a StB who said….” I don’t know how long I can take it, especially when it involves the children. I told Michael that I would apply to leave tomorrow and he just laughed. I don’t know what to do. He says they are just threatening. I have a terrible, uneasy feeling and I can’t concentrate. I really want to go home but I can’t leave Michael.”

“Neither Here not There” is based on diaries Marsha Kocábová kept over the years. After nearly 30 years in Prague, she witnessed one of the most fundamental changes the Czech society underwent in its recent history. In her eyes, how have the Czechs changed in all those years?

“It seems they are much more active; they were all sort of behind closed doors, doing whatever. Now you see them express their opinions. There is much more confusion and many more debates. They’re livelier, the young generation travels a lot, they are much more open, and I think it’s a self-reflective time for them.”

When did you get the idea to publish your diaries in a book?

“I had the ideal all along – not so much from myself but from each guest that we had from the West who would pop in or knew somebody we knew and came visit. All of them said the same thing, they said, ‘you have to write about this because it’s so unusual. The life I was living was so unusual that I realized I should write a book.” 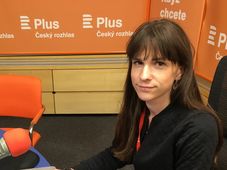 A variety of public and private projects have sprung up in order to help the Czech book market, heavily impacted by the coronavirus…