My people will never abandon their democratic way of life: the irony of a 1945 speech by Edvard Beneš

In the spring of 1945, just before he ended his six-year exile in Britain, President Edvard Beneš gave an address in English that was broadcast by the BBC. The fight to liberate Czechoslovakia was still under way, but by now it was clear that the war was drawing to a close and Beneš was already looking towards the post-war future of his country. A recording of the historic speech was recently rediscovered in the Czech Foreign Ministry, and is one of a number of archive broadcasts that David Vaughan has been studying with his students from the Anglo-American University in Prague. 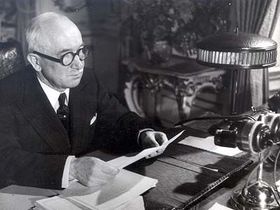 Edvard Beneš, photo: archive of Czech Radio The broadcast is moving not least because you can sense the mixture of exhaustion and relief in Beneš’s voice after years of conflict. We are given insights into the atmosphere in London at the time as well as the hopes and expectations of the Czechoslovak government in exile. We do not have a precise date for the broadcast, but it was almost certainly recorded just days before Beneš embarked on his two-month journey back to Prague via Moscow and Slovakia in the spring of 1945.

There are some passages that remind us of issues that remain just as relevant today. Here is a short extract in which Beneš is thanking Britain for providing sanctuary to refugees from Czechoslovakia:

“Before this war, we in Czechoslovakia were able to give refuge to many, many thousands of exiles and when our turn came to become refugees, once again – as during the last war – you softened the blow for us. You gave us friendship, understanding, moral support. You trusted us enough to let us plan our political liberation in our own way. We shall never forget what you have done. We in return have tried our best to give you and your government as little trouble, politically or otherwise, as possible.”

Anglo-American University student Amanda Palomino made a study of President Beneš’s speech and in this edition of Czech Books she will be talking about her analysis. By clicking to listen to the programme, you can hear her comments interspersed with extracts from the speech. The sad irony of one quote in particular has stayed in my mind, a reminder of how democracy is far more fragile than we would like to think: 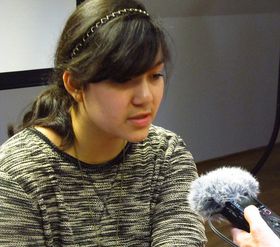 Amanda Palomino, photo: archive of David Vaughan “Of one thing I am profoundly convinced. My people will never abandon their democratic way of life. Their own bitter experience has taught them that government, when divorced from the consent of the governed, becomes tyranny. Our common task is not finished. The British are still engaged in two major wars and in Czechoslovakia we still have the common enemy to expel. We have all the problems of liberation to settle, our industries to revive, our broken social order to restore. But I do believe in the moral strength of my people and I am sure of the success of its post-war efforts.”

Edvard Beneš left Britain in the early spring of 1945. Prague was still in German hands, so he travelled first to Moscow and then to Slovakia. In April in the Slovak city of Košice he named the government that would be ready to take power as soon as the country was liberated. On 16th May he arrived in Prague, a week after the city had liberated itself in the dying days of the war. He was confirmed president on 28th October, and then reelected in June 1946. In June 1948, just over three months after what was in effect a communist putsch, he resigned. Czechoslovak democracy had failed to show the resilience he had so hoped for in his London speech. He died a broken man in September of the same year.