This summer, director and screenwriter Ivan Fíla’s historical novel about Dr. František Kriegel – the only Prague Spring leader not to sign the Moscow Protocol validating the 1968 invasion of Czechoslovakia – became a bestseller. That success led Fíla to return to a “fairy tale thriller” film script he’d set aside long ago and turn it into a novel. 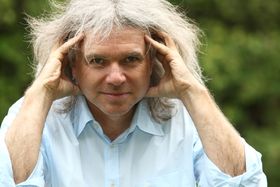 Ivan Fíla, photo: Socc82, CC BY-SA 2.0 History will remember Dr. Kriegel as the one Czechoslovak leader who stood up to Brezhnev and refused to sign the Moscow Protocol legitimising the Soviet-led invasion of 1968. A feature film based on Ivan Fíla’s meticulously researched book on Kriegel, The Man Who Stood in the Way, is now in the works.

Meanwhile, the award-winning filmmaker-turned-novelist found time to pen a riveting ballad in “film language” about a love transcending life and death, Heaven and Earth. I caught up with him at a Prague café ahead of the release of that book, Rytec kamejí, about a love affair between an immortal man and a woman who can recall past lives.

“We were arguing about what the English title should be. In Czech, it’s Rytec kamejí. Some thought it should be ‘The Cameo Engraver’, some that it was better to call it ‘The Gem Engraver’.

“I call it an ‘existential fantasy’. It’s a fairy tale for adults – it’s not for kids, but maybe, also.

“I wrote a screenplay in 2005 during a very, very special time. I was absolutely isolated, first somewhere in Spain and then here near Tábor – in ‘Czech Siberia’. I had these dreams and my imagination was racing. It was very strange. And I put it down on paper.

“It’s the story of an immortal man. He’s a gem engraver who works only nights, 120 years old – he’s the oldest man on Earth. He lives in some medieval city like Prague, but I never call it by name.

“He’s unable to die. He tries to kill himself but there is no blood coming out of his body.

“And a young woman comes into the town, she’s 20, and she remembers a great time of a past life, 100 years before, when she was as old as this [immortal] man, when they were both 20.

“She’s able to remember all her past lives. And she’s the only person in the world who can save him from immortal life; who knows the key to, the secret of, his immortality.”

So, the man is 120 and has lived one life but cannot die. The 20-year-old woman has lived many lives, and can die, but keeps coming back reincarnated? 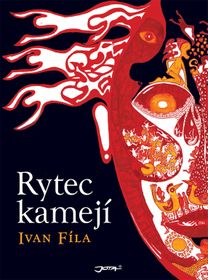 Photo: Jota publishing “Right. At the top of the love story, she was killed. She was born with a black scar on her neck. And at that time, in 1899, people thought that she was marked by the Devil, had to die – immediately. She was killed by her father.

“But she had experienced a great love story, travelling to Venice with this man [the gem engraver].

“They were born on the same day, in the same town. A magician at a Wild Lake, by a castle, was looking for a man or woman who would suit his experiments in immortality. He chose this man.

“He invited this couple to his castle. He promised them a wonderful life, in which they would experience the beauty of all beauties. But he told them the price is very high: you will not be able to die. And he was laughing at him – he couldn’t believe it – but it happens.”

“So, it’s a story about eternal love and eternal life; about dreams that many people have – many of us! It’s a very dramatic story, a kind of ‘fairy tale thriller’.

“It’s very different to the [František] Kriegel book – where you must be faithful to the facts and the history – but here, you can use your fantasy, play with the language and creating such a story, you are very free.

“I pitched the story at the Frankfurt book fair last year to some international agents. They were very excited about it, saying, ‘Oh! So, it’s a mix of Harry Potter and Dan Brown. That could be a great success. Why don’t you write it in English or German?’ And I said, because I can express myself best in Czech. ‘But we could publish it in three languages at the same time.’ And this is the goal.”

It strikes me as odd that at the Frankfurt book fair, Harry Potter would come to mind rather than Faust.

“Yes. Some people read a sample and said, ‘Oh, it reminds me of Kafka’s The Castle’ It’s a dark story – very dark, very unusual. It’s in a film language, written it short sentences, not big on description because ... If a reader tells me, ‘I read it in one night’, that’s the best compliment you can get. I try to write this way, so you cannot stop reading.”

“I couldn’t get any money – It would have been very expensive!” Photo: Universum publishing But now, should the book prove a success, perhaps it will be?

“Yes. That’s the goal, like with Kriegel. The book became a bestseller, so now it’s much easier to get money to make a film of it. With The gem engraver, it could be the same. But that would be a very expensive movie, even for an American production in 2005.

“Some producers said it was a lovely, fantastic story but it’s a 100 million dollar project. So, I stopped working on the script. But now, there are new tricks, new possibilities, it’s much cheaper. And, if the book is a success, you never know.”

Why would it have been so expensive, actually?

“Because it’s showing all her previous former lives – she was a prostitute in Paris, mining for salt in Sicily, she was a queen somewhere. You would have to create this magic world and at that time, tricks were very expensive.

“Now, there are better possibilities to create this vision, so I’m quite optimistic this movie would only cost something like 30 or 40 million dollars. That’s nothing!”