Arnost Lustig: Love in the proximity of death

Czech Books comes today from the Cafe Union in Prague's Nusle district, where I'm joined by one of the Czech Republic's most honoured and widely read novelists. Arnost Lustig, born in 1926, was sixteen when he was sent to the Terezin ghetto during the war, and went on to survive Auschwitz. After the war he worked as a journalist, and went on to become a novelist of international reputation. He is still very active as a writer, with all his work strongly influenced by his experiences of the Second World War. His recent novels, "Lovely Green Eyes", "Waiting for Leah" and "Fire on Water" have all been received with critical acclaim, especially in the United States and Britain. They will be the focus of our discussion today. 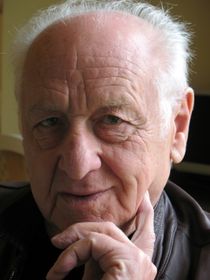 Arnost Lustig I'd like to start with a brief extract from "Waiting for Leah". This scene is set in the Terezin ghetto towards the end of the war at a moment just before the main protagonists come to know that they are probably going to be sent to the death camps in the east. One thing that surprises me in this extract is the resilience with which people try to carry on their normal lives in extraordinary circumstances.

At the Firemen's House the Hofers from Vienna sang about caviar, about bars in Grinzing and the Barrandov in Prague, about how people are always at home in their hearts and about how the Terezin ghetto seemed the most beautiful in Central Europe. The song had four verses. The audience applauded and insisted on an encore, everyone was smiling. During the intermission foreign currency dealings went on, in groups or in twos; rings, gold and diamonds changed hands. For a while, at least, we found consolation. Escaped into the realm of fantasy. A reminder of what had been and might be again.

I chose that extract, because it is something that turns up again and again in your work, the idea that even in the inhuman circumstances of the ghetto and the concentration camps, people somehow try to carry on leading their normal lives.

"They say that love exists at a distance, but love exists also in the proximity of death, and it's fascinating, because everybody knows what love is, but love has no definition. There are only metaphors and poetic comparisons. But it's real, and people are ready to die for love. This is the case of the heroine of this book, of Leah. She knows that she's going to die, she knows that her lover will die, but every moment of love together means eternity for her. But this eternity lasts for a few days."

Here is another brief extract from the book which shows this extraordinary tenderness that pervades the story.

I wanted to have her. To embrace her. To feel her so close that it couldn't be closer. To fuse with her. To rise with her above everything that disturbed her, so that only the now, she and I, were left. I had no words for it. Only an adolescent's nervousness. I had no time to reflect on how certainty could arise from uncertainty, self-assurance from anxiety. Everything in me at that moment was selfish. Yet at the same time, unselfish and soft, like a cry for help. I felt like I - as once I had done - was hanging by my hands under a viaduct while a goods train passed overhead. I heard the roar above me. It filled my ears and brain. If I made a mistake, I'd fall and be killed.

The tenderness of these love scenes is surprising - they are almost classic scenes of adolescent first love. How is it that some people become so dehumanized by such dehumanizing circumstances, while for others it almost seems to reinforce their humanity?

"I don't know if it's so divided. It can happen to one person, to be brutal on one occasion and be tender on another occasion. This is how people are. The book is about a boy who would like to take revenge on a man who seduced his lover when he was very young, and now he is trying to pay back and to seduce that man's mistress. It's a sort of cold-blooded calculation, but it's a fascination with a beautiful body and a beautiful face of the other woman who belongs to someone else, and it changes into love. So it starts as revenge, and then it's pure love. It's interesting to write about such things because it's exciting and you can feel it very intensively.

"During the war, love was relief from reality. After the war, in socialism - which is called communism now - love was, just like during the war, an expression of protest. You did something that the Nazis - and then the Party - couldn't influence. You were free. So it's a very complex question of what is the role of love and love affairs in such times. It's very interesting, good for writers."

I'd like to turn as well to another of your recent novels, first published in English translation at the beginning of this decade. It's called "Lovely Green Eyes" and returns to a subject that has preoccupied you in several of your novels - the subject of a young woman in a concentration camp, condemned to death, but saved by becoming a prostitute. She is sent to an SS field brothel behind the eastern front. The heroine, Hanka Kaudersova, has encounters with terrifying figures - SS officers who are completely brutalized by the regime and by their experiences of the front. Here is a short extract from the book, involving Obersturmfuehrer Sarazin, who is a revolver-brandishing "client" of Hanka Kaudersova in the brothel. This scene comes where he is in her room.

He looked at his Luger with admiration and gratitude, with what he would call love and loyalty; something she didn't understand and could explain to herself only by the power that the weapon lent him, the superiority it gave him. It frightened her, as did everything in which she could not orientate herself and against which she had no defence. She sensed the danger in her whole being. She watched him looking at his pistol. She was waiting for what he was going to say or do next.

It's a terrifying power-game, with this mad, scarred SS officer, who as a character in the novel is also absolutely fascinating. But at the same time I wonder, given that you often talk about empathy and about thinking yourself into the characters, how do you do that, when you're writing about someone who is as twisted and cruel as Obersturmfuehrer Sarazin?

"Every human being is a mystery. This man is a pervert, but at the same time he's a poet, and he is searching for some beauty. Even this is perverted, because he is searching for beauty in an evil movement, Nazism. If she wants to survive, she has to endure everything, including this officer Sarazin."

In "Lovely Green Eyes" and in many of your books, there is no happy ending. In the famous novel "Dita Saxova" the heroine commits suicide, in "Lovely Green Eyes" we know that Hanka has been permanently scarred physically - she survives but she cannot have children. I often have the feeling from reading your work, not only that there are no happy endings, but also that there is no reconciliation. You seem to be angry.

"Yes. You are right and wrong. There is a lot of anger. When I wrote 'Lovely Green Eyes', I was so angry. It's true, because you cannot experience Nazism and not be angry, because it was an attempt to deny ten thousand years of civilization. They wanted to establish something completely unknown, horrible, evil. So you are angry. But a writer is writing by his instinct and controlling it by his brain, and the danger with writing is that you cannot feel what you are supposed to feel, but what you really feel. So if I feel that she jumped from a rock to kill herself I have to write it.

"Once I wrote a novel where I was really scared of myself. My mother was very religious. I'm not so very religious and my father was lukewarm, but my mother, whom I respected - as everyone respects his mother - was very religious. And I had a novel - it was called A Prayer for Katerina Horovitzova - and at the end I wrote that she was more brave and more beautiful than God. And when I finished the sentence I was shocked and scared to death. I said - what would me mother say? But then I was thinking about it and I felt that it jumped out really from everything that my being is. So I left it. I left it and nothing happened of course, because novels are not shattering the world. But for me it was a strange example of what your instinct dictates you and what your brain censors. It's one of the strange things about writing." 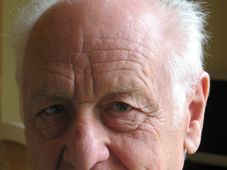 This week would have been the 90th birthday of Arnošt Lustig, one of the great voices of contemporary Czech fiction, who died in 2011.… 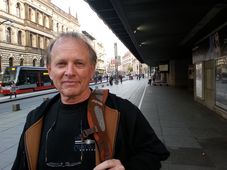 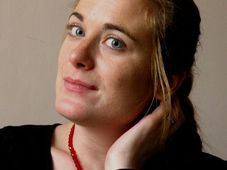 Adéla Gálová: Magyars are not from Mars

The Czech Republic and Hungary are countries of similar size with plenty of history in common, whether we look back to the days of…