Allen Ginsberg and other immoral menaces

Fifty years ago, on 1 May 1965, annual student festivities in Prague to mark the joys of spring culminated in the American Beat poet Allen Ginsberg being declared “Král majálesu” – the King of May. A week later, Ginsberg’s visit to Czechoslovakia was cut short when the authorities labelled him an “immoral menace” and put him on a plane to London. But the Czech affection for the writings of the Beat Generation remains to this day. David Vaughan looks at some of the American writers that have captured the Czech imagination in the decades since World War II. 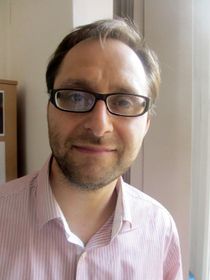 Richard Olehla, photo: David Vaughan Interest in American writing goes back to the 19th century, with the first translations of Whitman and Longfellow by Josef Václav Sládek, but the origins of today’s Czech enthusiasm for American literature can be dated to 1945, when it was American troops who liberated the western part of Czechoslovakia. With the communist takeover three years later, the United States became the enemy, and American writers, whatever their political hue, were looked on with official mistrust. To get an idea of the complexities of the years that followed I went to see Richard Olehla a scholar of modern American writing at Prague’s Charles University.

“There was a big difference between the attitude of the Czech authorities towards British literature and American literature, because American literature was the literature of the enemy – the imperialist enemy, as they called it. So in the fifties you had the Angry Young Men in Britain, who were widely translated, and at the same time you had the Beat Generation which was very left wing, but at the same time was not really translated, because it was the literature of the enemy. So what we had in the fifties was basically John Steinbeck, because of the agrarian tradition of the American South.”

And with the Beat Generation was there also a certain prudery on the part of the communist regime? I know that the regime didn’t like literature that was sexually explicit.

“Definitely. ‘Howl’ was translated in the sixties by Jan Zábrana, who was one of the most important translators of the communist era, along with Josef Škvorecký, and of course it caused a lot of controversy and uproar, mainly because of its open sexuality and, of course, homosexuality, because homosexuality was banned at the time.” 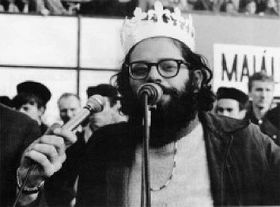 Allen Ginsberg as the King of May, photo: Engramma.it, CC BY-SA 3.0 And a book like Jack Kerouac’s ‘On the Road’ is almost part of the Czech literary canon, isn’t it? There are certain American books that every Czech has read, and that is one of them. Why is that?

“I think it’s a symbol of freedom. You have to imagine that Czech people were not allowed to travel abroad for forty years, and ‘On the Road’ represents a lifestyle based on travelling, so it did become a symbol of freedom and free moving, I’d say.“

“We had this sort of Czech underground scene, which included everybody from street sweepers to university professors and all of them were really interested in the symbol of American freedom in American literature, and when the translation came it did become a sort of Bible of modern fiction. So this is what happened.”

“Yes. I think it was an interesting visit for him, because if I’m not mistaken it was the first time he travelled to the then Czechoslovakia. He took part in the student festivities related to May 1 and he became the so-called King of May. He became a sort of public character, which of course attracted the attention of the secret police.

He actually wrote a poem inspired by his trip here…

“He wrote it on board the plane that took him from Czechoslovakia – against his will of course. He was expelled by the state authorities and in the poem he claimed to be very proud of becoming the King of May and in a sort of free verse he really elaborated on the topic. And I think for him it was all about the clash between the authorities and the students. That was pretty much the topic of the hippy movement later.”

A key figure in influencing the American literature that Czechs read during the communist period was himself a very famous novelist, Josef Škvorecký, who later went into exile in Canada. What role did he play? 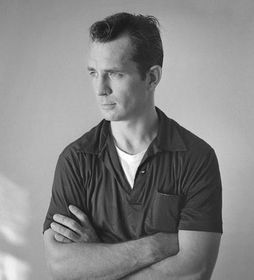 Jack Kerouac, photo: Tom Palumbo, CC BY-SA 2.0 “He was certainly the key figure in promoting American literature in Czechoslovakia. He was a writer himself. He published his novel ‘The Cowards’ in 1958, which caused a lot of controversy and he had to leave his job in a literary journal called ‘World Literature’. And he became an editor in the publishing house ‘Odeon’ which was the biggest publishing house in Czechoslovakia.”

What did that mean in terms of what was made available to a Czech readership?

“Well, the publishing house was of course owned by the state and it was one of the few publishing houses in Czechoslovakia, so once you become an editor in this sort of system you have incredible power over the readership, because you are the one who decides what will be read and what will not be read. So Škvorecký’s literary taste was really crucial in terms of what people in Czechoslovakia could and could not read. The other thing, of course, was what the state authorities allowed him to translate and to publish. But in this sense the 1960s were better than the 1950s.”

Can you give a couple of examples of books that were published at that time?

“He translated the works of Ernest Hemingway, for example, and William Faulkner, into Czech – much of it for the first time. And one of his most famous translations is Warren Miller’s novel ‘The Cool World’, which is a very complicated novel in terms of language, and Škvorecký translated it into colloquial Czech. The translation was immensely popular among the Czech public, especially young people.”

There are several books that are very famous in this country because of the translation. The Hyman Kaplan stories are a typical example. 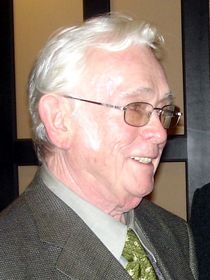 Josef Škvorecký, photo: Public Domain “Definitely. There’s been a whole tradition of mainstream authors in the US who became cult authors for Czech people, one of them being definitely Leo Rosten with his series of books about Hyman Kaplan. I’d also include ‘On the Road’ on the list, because, when you compare the situation in the US and the Czech Republic, today basically all works by Jack Kerouac have been translated into Czech and many of them have been translated only recently. So I’d say that the Beat Generation is still alive here, where in the US it is part of literary history and not really a living tradition in modern American fiction.”

Which brings me to the present day. After the fall of communism there was a boom in publishing American literature – very much at the expense of literature from other countries.

“Even today more than fifty percent of translations come from English and the majority are US writers. I think that Czech people still have a positive attitude toward American people and American literature, because for them it is a symbol of human freedom. Of course it’s a bipolar view of the world, but this is what we lived in for forty years. People really like Jewish American authors, not because they would be interested in the way the Jewish community lives in the US, but because I think there is a certain connection in topics and maybe in style, maybe good humour and sense of humour, I’d say, that we share with them.”

“He is and historically he was one of the few filmmakers that could make it to Czech cinemas even before the fall of the Berlin Wall, so he did have something to build on. But you are definitely right. Woody Allen would be the embodiment of this principle and his style of humour, I think, has been very close to Czech people.”

And where do we stand now? Which authors are being published and reaching broader Czech audiences? 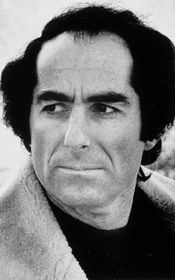 Philip Roth, photo: Public Domain “I’d say the situation is pretty normal in terms of global readership. Sometimes translations are published on the same day as the originals. For example, Dan Brown’s books are published if not weeks then months after the original English book is published. But we also have some big names being translated. Don DeLillo has been translated widely, Thomas Pynchon will be translated now for, I think, the fourth or fifth time into Czech, and all works that have been awarded a literary prize, the Pulitzer Prize, for example, or have been shortlisted for such a prize, do make it into Czech translation eventually.”

And finally, who is your personal favourite?

“Recently I have grown extremely interested in Philip Roth, in his works and in his visits to Czechoslovakia in the 1970s. It is only little known that Roth helped Czech writers immensely and established a book series with Penguin, and published Milan Kundera or Ivan Klíma in English for the first time. So I’d say Philip Roth is today my favourite.” 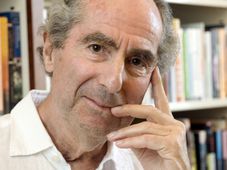 Towering Jewish-American author Philip Roth has died at the age of 85. And while most of the tributes will rightly focus on his many… 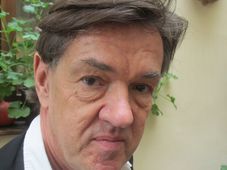 In his twenty years as editor-in-chief of the publishers Faber and Faber, Robert McCrum introduced some of the best Czech writers,…

Paul Robeson in Czechoslovakia: all culture comes from the people

The Civil Rights Movement in the United States sent ripples around the world, not least in the Soviet Union and its satellites. In…