This Sunday, sees the premiere of a new play at Prague’s New Stage of the National Theatre by Prague’s famous Tap Tap Orchestra – a unique band mostly made up of disabled musicians. In the past, The Tap Tap were behind pop hits like Řiditel autobusu; they even held events in which they showed it was possible to break all barriers, for example, rappelling – in wheel chairs – from Prague’s massive Nusle Bridge. Even so, the new play, entitled Nefňuka, years in the making, is promising to be their most ambitious project to date. 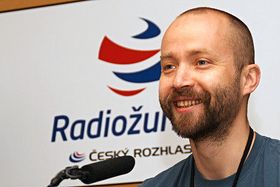 “Around five years ago we came across a book called Jésus Betz by Fred Bernard and Francois Roca. It’s the story of a boy who is born without arms and legs. But because he is smart and courageous he experiences a great adventure. In our adaptation, he becomes the head of his own circus. Our version is called Nefňuka.

“In Czech, fňukat means to snivel or complain, to bellyache. Nefňuka means the exact opposite: it is someone who faces problems squarely. The motto of our adaptation is ‘Only those who give up beforehand truly lose’. It is important to not feel sorry for one’s self or even for anyone else and to never give up beforehand.”

From day one, the project appeared to be plagued by difficulties and it must have appeared doubtful at turns whether it would ever be successfully completed or get off the ground. It soon became apparent to all involved, that producing a theatre production of such size and scope, would be far from easy. Šimon Ornest again:

“In Czech, fňukat means to snivel or complain. Nefňuka means the exact opposite: it is someone who faces problems head-on.”

“We faced a lot of complications on this project which taught us that theatre is a lot more difficult even than the concerts we do or other events we did in the past. My father, who wrote the Czech adaptation and is co-directing with Jakub Matásek, also had major health problems so there was also that. Then there was the design of the production itself.

“One thing which was difficult to work in but which is definitely a big and exciting part of the production is that we wrote parts for four members in electric wheelchairs. The wheelchairs will themselves serve a mechanical role in moving large puppets around the stage. That is something I do not think it has been done before.”

All of the difficulties faced were compounded by the fact that it is the first time The Tap Tap had tried anything similar. The first time, at anything can be rough. Šimon Ornest stresses that the group was lucky to have the help of acclaimed theatre director and scenographer Jakub Matásek: 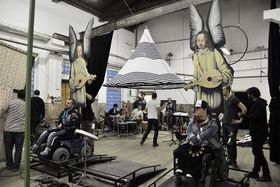 Photo: archive of Tap Tap Orchestra “Because he lives in Pardubice, Matásek enlisted different puppet-makers to build the mechanisms and puppets at a workshop in Pardubice and also at the Drak workshop closer to Prague. Our members who are on wheelchairs of course rely on them to be independent, to get around without help, but in this case they will also use them to manipulate the puppets on stage. They will use this kind of gearing system to move them around.

“The performers in electric wheelchairs can manipulate the puppets on the spot at special onstage ‘stations’, or they can move them at the same time they will be moving themselves.”

Ornest didn’t want to give away too much off the plotline but he did say the performance would be well worth it for the first visitors on Sunday.

“We think that it is an original means of using wheelchairs and hopefully they will survive the performance.”

“The wheelchairs will themselves serve a mechanical role in moving large puppets around the stage.”

On stage in the performance will be a good many members of The Tap Tap, five of whom are professional musicians, and the rest of whom are students or graduates of Prague’s Jedlička Institute for physically disabled young people.

“Twenty of us will be on stage throughout, some with smaller or larger roles, some creating scenic music which was written by Jaroslav Svoboda of the group Traband. The main role, Nefňuka, is one of the puppets and his father is played by a professional actor. In all, those on stage and those behind-the-scenes, will count around 40 people.”

In preparation, the cast and crew had to prepare on a similar stage used by the Forman brothers in Prague’s Bubeneč. Meanwhile, the project also successfully relied on crowdfunding to help cover unforeseen costs. That successful campaign helped the production get off the ground not only for Prague’s New Stage, but potentially also beyond, Šimon Ornest again: 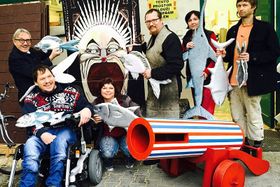 Photo: archive of Tap Tap Orchestra “We are almost certain, barring unexpected surprises, that we will be able to begin working on a travelling version of the show. The production is complex, with projections and stage apparatus and lots of moving parts. But we want to do a travelling version to bring the show to different parts of the Czech Republic and beyond. It would be a shame, given how far we have come, to just remain at home.”

Like other Tap Tap projects before it, Nefňuka, according to Ornest, reinforces the group’s overarching message:

“We want to show it is possible to live a full and active life even with a severe disability.”

“The main thing all of our productions have in common is that they communicate with the public. With people who have no experience with disabilities or the physically handicapped, having no one like that in their family. Who may not know how to react or to process the information, or might feel sorry for someone in that position. We want to break barriers down. It is nothing pleasant to be ‘felt sorry for’ if you are disabled. We want to show it is possible to live a full and active life even with a severe disability.” 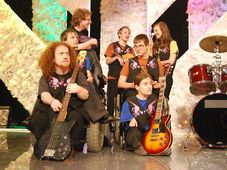 In mid-February, Wenceslas Square in Prague will be hosting a special event – a concert of the Tap Tap orchestra. The Tap Tap has travelled… March 21st is the International Day for the Elimination of Racial Discrimination and to mark the occasion organisers from Opona, a…