Three theater groups from Prague, Budapest and London joined forces last year to create a multidisciplinary project called home:scape. Combining interviews, blog entries and a multimedia theater performance the creators looked at the theme of home, trying to find out what defines that ambiguous concept for different people – those who had lived in one place their whole lives, and those who are in constant flux. I asked Jonathan Kennedy, the executive director of one of the theater troupes - Tara Arts in London –how the idea for the project came about: 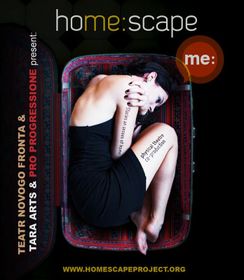 “The idea for home:scape came about in the summer of 2011. And it was meant to explore the idea, across borders and across the continent of Europe of what people’s sense is of home – for a range of different communities in London, Prague and Budapest. We’re talking about older people, young people, really a cross-section of points of view on what home means and what they want home to mean.

“We did about 45 interviews in Prague, London and Budapest. The companies involved are Tara Arts in London, Teatr Novogo Fronta in Prague and Pro Progressione in Budapest. We did workshops in each of those countries and then began to work the interviews into some sort of theatre language, in order to create the performance.”

Who did you do the interviews with in these cities?

“We tried to represent in the interviews the full range of the people that make up each of the cities where we are based. I know that in Budapest there were interviews done with a Romani families that were just passing through the city at the time that we were doing the research. And in Prague, for example, we did interviews with Russian émigrés, as well as with people who are by birth Czech.

“We wanted to should how migration and the shifting of populations and people across Europe affects how the sense of home is represented. Because people who move from one place to the next have a different sense of home from those who were born in one place, grew up and lived there their whole lives. And to have these different points of view makes more of a fascinating project.”

Did you feel that there is a different sense of home in the west and the east? 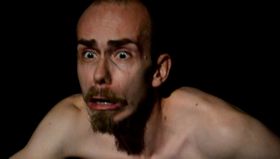 “Of course there are theme that span across each of the communities, but the locations condition the differences that affect how the show has been made. So, whereas London is much bigger, it is sprawling, and it has many different suburbs and different local communities, whereas Prague is smaller, has a well-defined center and less racial diversity in its population. And that, in a way, tells a different story of what home is.”

Could you sum up what the audience will see at the performance?

“You will see an international cast of performers from the UK, Hungary and the Czech Republic, but also from Slovakia, for example. We had an Austrian filmmaker on the project. We have a Russian director. The range of artists who perform on stage is as diverse as the stories that are being told.

“The performance is extremely visual, high-energy. And you certainly get a sense of the vibrancy and juxtapositions of what home means across Europe.”

Immigration and what people call their home has been a sensitive issue in Europe lately, especially since the economic crisis began. Did you notice a shift in how Europeans view their homelands, and how non-European residents of Europe view their lives here?

“I think the different stories of being a migrant or an immigrant all share similar themes, it is about aspiring for something different, something new and better than that which has gone before, but it also contains the spirit of adventure and pioneering. And those ideas, I think, cut across communities and generations, irrespective of how the economy has done in Europe of late.” 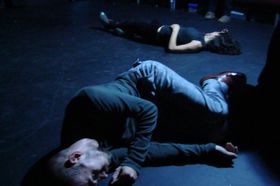 This week, the play had two performances at the NoD art space in Prague. I also went to NoD before the second performance to speak to Irina Andreeva, the author and director of the piece. Irina is a member of the troupe at Teatr Novogo Fronta in Prague, and home:scape is her directing debut, which could not have been an easy feat – the performance involves people from ten different countries and the cast had only a few short months to rehearse before the premiere. I asked Irina, if the main theme of the performance, and the project as a whole, was a personal one for her:

“Of course, this topic is very close to my own story, because I don’t live in the country that I was born in, so the theme of home is very sharp and current for me. I think it was a good coincidence that I came to this project.”

How did the stories you recorded become a dance performance?

“I would not call it a dance performance. It is physical theatre, not dance as much.

“Sometimes it is enough for just one sentence to inspire you. For example, one woman from Bangaldesh really touched all of us. She said, I speak to my mother in English and she answers in Bangladeshi. We communicate, although she doesn’t understand English. But we love each other, so we understand each other. It was a big inspiration. These kinds of moments awake you fantasy.

“We didn’t copy their story. We took their feelings and invented new stories. We didn’t want to make a play with stories of real people.”

You started speaking about communication, so I wanted to ask what it was like working with a cast from many different countries and background.

“There were two sides to this. On the one hand, it was very difficult to make a single homogenous group out of them, because techniques and knowledge of theatre was so so different. Someone is more from a dance background, someone is more from drama. Someone knows how to dance, another person doesn’t know how to speak, or another person speaks very well. This work was not easy.

“But on the other hand, it was very inspiring. It is such a colorful group. And everyone brought their own initiative, their own images, his own way how to tell a story on stage, and it served as an inspiration for me.”

You began earlier to speak about what this performance is and isn’t, could you define it even more?

“We say that this performance is a ‘metaphorical collage’. There is no single storyline that goes from the beginning to the end of the show. But there are pieces of stories, some important moments of different stories of different people. At the same time we are very open about the fact that this is theater, and that we are actors who just want to act and tell different stories.

“In the performance, there is always a story that has a main character, and the other people help him to play out the story. They other play his audience, or the play his partners. So they change their characters for that moment. We also say that this performance is ascetic and transparent.

“It takes place on an empty stage with minimal props, minimal effects. Because for us, it’s all about the people and their feelings.”

You had a premier in London, and already one performance here in Prague. Did the reactions in the two cities differ?

“They were very different. The audiences in London are very different from Eastern Europe. They are much colder, much more reserved. And they do not applaud so much. But people who liked it would come back a half an hour after the show and spoke to us in detail about the performance, how they understood the idea. They said a lot of things and it gave us a lot.

“But here, in Prague, people are more spontaneous, they are warmer, ready to smile, and probably more emotional. I’m from Russia, so for me these kinds of reactions are much closer to my own. But we will see what it will be like in Budapest.”

And as Irina Andreeva mentioned, the home:scape performance will travel to Hungary in October, as well as to Slovakia and Poland. You can find out more about the project and the performance at www.homescapeproject.org 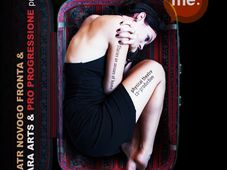 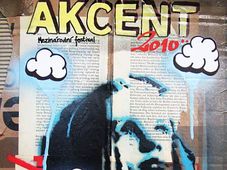 A new festival that has just got underway in Prague focuses on social outreach or community theatre, in which professionals engage…

Brno’s main train station is set to play host to a local experimental theatre between the start of next month and the end of March.…