This week I had the opportunity to visit a French brasserie here in the Czech capital, the site for the launch of a new Czech book about famous French actor Jean-Paul Belmondo. Written by Jiří Žák, the new book examines Belmondo’s life and career. Mr Žák, an actor himself, explains that Belmondo’s films, from Pierrot Le Fou to The Man from Rio have always been held in high regard by many Czechs, part of a broader fascination with French culture which has a long tradition here.

Jiří Žák “I think it goes back to even before the war, when Czech modernism, with representatives such as Nezval and Teige, was influenced by French literature. It was a fascination tied to Cubism and Surrealism and more. always the sense that the Czechs and the French are very similar. I don’t necessarily think that we are, and I’m not sure how it came about, but it is true that cultural ties between us have always been strong. Under Communism, French films were among the few Western products which made it into Czechoslovakia, contrasting films from the Soviet bloc.”

As far as Belmondo himself is concerned, the reasons for appreciation are pretty clear-cut:

“Belmondo was always appreciated as a ‘type’. He was liked, for one, because he always came across as very natural, in his style and abilities. Men tended to see him as a hero, women, as a sex symbol.”

“Who wouldn’t love him?! Women loved him because he was handsome, albeit in a rough kind of way and men loved him because he did all those crazy kinds of things in his movies. The other reason might be that back in the Communist era Belmondo’s movies, films like The Man from Rio and The Man from Acapulco, were pretty much as close as one could get to Western action cinema.”

And, says author Jiří Žák, Belmondo, now in his mid-70s, was popular for other reasons as well.

“He always stylised himself as a ‘common’ actor, a man of the people, a Parisian actor and so on. Godard’s films like Pierrot le Fou perhaps pushed things a little too far, making him less accessible. I think that Belmondo strived for new expression and new ways to reach his audience.”

Dozens of fans and film and music personalities attended the launch of the new book, an event complete with a live performance by Jana Musilová the star of a number of Czech musicals – who, by the way, is also known for having dubbed Agent Scully in the Czech version of the X-Files a few years back. She sang a number of chansons at the event, including Edith Piaff’s La Vie en Rose.

Afterwards, I asked author Jiří Žák how difficult it was to write his version of Belmondo’s story.

“The book was a pleasure for me to write. Normally, I’m not that interested in actors: I’m an actor myself and know actors and the surroundings very well. If I’m going to write about someone, there has to be something deeper, artistic or philosophical. I saw him on stage and Belmondo was a fantastic theatre actor: and it was incredible. But I met him personally only once. I had wanted to make a film with him. I had worked on a documentary with Robert Hossein (Jeoffrey de Peyrac in the Angelique series), who was Belmondo’s close friend. But I never had a chance to ask Belmondo. Shortly afterwards the actor fell seriously ill, after a heart attack and a stroke.” 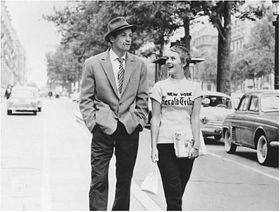 'Breathless' Over the course of his career, Belmondo has starred in countless memorable films that have their place in film history and a special place in Czech hearts. But for Jiří Žák, the most important is still one of Belmondo’s first, his role as Michel Poiccard, a small time gangster in Paris in love with the pretty Jean Seberg. The film was Jean-Luc Godard’s Breathless.

“I think that the key most important film in Belmondo’s career was ‘A Bout de Souffle’ (Breathless). Films he did later were more commercial, involving numerous script writers, directors, many friends. The key picture was Breathless.”

“This movie was one of the best in Belmondo’s life, the beginning of his success. He had other good films too, many comedies, but Breathless was absolutely great.”

Jiří Krampol was an honorary guest at Thursday’s book launch – no launch could be complete without him. He also discussed what he considers to have been one of the more interesting of Belmondo’s later roles, one in which he played “himself”. The film was called Les Acteurs:

“The last movie with Belmondo in Czech was called Old Actors Must Die. In the movie he played something like a homeless man with a bottle of wine, without anyone knowing who he was. It was Belmondo as Belmondo.”

Film critic Vojtěch Rynda says that dubbing Belmondo is something for which Mr Krampol is most recognised.

“When he was his surrogate voice that was back in the times that are referred to as ‘The Golden Age of Czech dubbing’. This was especially true for overdubbing in French movies. Jiří Krampol did pretty much all of Belmondo’s movies and he is definitely more famous for his voice than for his own acting career. He acted in many poor Czech films; on the other hand, having dubbed Belmondo, everybody knows his voice in the Czech Republic.”

Still, Mr Krampol was not the only Czech actor to dub Belmondo. Author Jiří Žák explains:

“The first to dub the actor in Czech was Jan Tříska. He was exceptional. But he left Czechoslovakia in the 1970s and a replacement was needed. Jiří Krampol took over and did a great job. Jan Tříska and Jiří Krampol were both exceptional in voicing Belmondo.”

Jiří Žák says that the Americans had Newman and Redford but in Europe in the ‘70s the biggest stars were French. Judging by the number of those in attendance at the launch this week, Jean-Paul Belmondo remains as much as star in the Czech Republic now, as during his heyday.