Clowns, puppeteers, acrobats, mimes and many other striking, colorful and often frightening street artists will take over Prague’s center on Monday as part of the annual street theater festival Behind the Door (Za dveřmi). Around twenty troupes from more than 15 different countries will be performing next week in the afternoons and evenings in the heart of Prague, at Wenceslas Square. It will be the fifth year of Behind the Door, and for this week’s Arts, Masha Volynsky had a chance to speak to a member of the festival team, Adam Ondráček, about what special performances the festival is featuring this year. 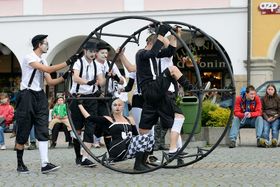 V.O.S.A theater, photo: archive of Behind the Door festival “One of the highlights should be actually the program on Monday, which includes a nice performance by the Czech V.O.S.A theater. There will be a five-meter tall circle with people rotating and moving through the whole square and the streets. It’s actually quite frightening if you see it. So, I think it will be quite a show.”

And what about some of the foreign performers? What will be maybe the most interesting act?

“We are bringing Theatre En Vol from Italy, from Sardinia. They are going to presenting a show called Brigade of Urban Harmonization. They work in a site-specific way, so we can expect a very nice performance in the streets.

“In terms of the other foreign performers, we can look forward to a Japanese puppeteer Nori Sawa, who currently lives in Prague and Tokyo – he moves about once a month. And he prepared a kind of a Japanese version of the Little Red Riding Hood, in which the grandma has learned some martial art and she’s defending her granddaughter against the wolf. And it’s quite a nice story and a new point of view on the traditional Czech story.”

“Street theater has a huge power in that you don’t have to translate it in different countries. Mostly, you work in a language which has no barriers. The context is sometimes political in street theater, and then you done need some sort of explanation, but mostly street theater focuses on life stories, themes of temptation…and I haven’t seen that many political or local themes too much. So, that’s the great thing about street theater – you can tour all of Europe and everyone will understand you.” 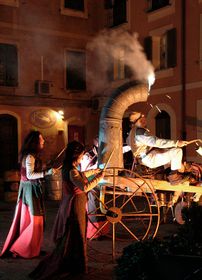 Theatre En Vol, photo: archive of Behind the Door festival Street theater relies a lot on physical interaction with the audience. Czechs are not very used to that…

…It’s not really part of the culture. How does that work usually during the performances here?

“This is quite funny. We know this. I am Czech myself, and I don’t like interaction in theater. And it’s quite funny, because last year we had a performer here from Spain and he was very interactive. And in the end, no one was feeling uncomfortable. Normally, when people come to Wenceslas Square, they stand there, they wait, they watch, but [last year] some kind of magic happened and then they were feeling totally free and able to take part in the performance.

One of the parallel events that is happening in additional to the performances at the festival is a program called Take Care of Your Square, which with its name, at least, suggests that we should be looking our city and our squares. Tell us a bit more about this program. 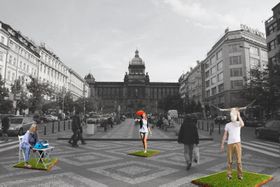 Take Care of Your Square, photo: archive of Behind the Door festival “The special performance Take Care of Your Square is created by performers from more than 10 different countries. It’s [a series] of small performances, which will be held on one-meter squares of grass, or real green grass. And the point is to take care of your own square, the one-meter squared square. The performance will start on Monday the 15th at 4 pm, and it will culminate at 6pm in one huge performance, which will be made together from these squares and these performers.”

And, of course, the one-meter square that each performer will have available to them is reminiscent the current law on busking. There is a new regulation in the works that could limit musical performances on Prague streets in the future. Do you think this is a big threat to street culture here?

“Well, actually, a year ago, we weren’t even allowed to busk at all. So, I wouldn’t call it a big threat. But I do hope that it is not going to pass, because now the regulation that you can only use one-meter squared of space and there are some additional regulations about the exact places in Prague where you can’t busk. I can understand that you shouldn’t play in front of a school, in front of a hospital.

“But the problem is, busking on the Na přikopě [in the center] and other streets, and I don’t really understand why they were chosen. But, in comparison to other cities in the Czech Republic, we are the only town that has this possibility to busk. So, I think the situation is quite good, I hope it’s not going to get worse. I think, everyone should keep in mind that it has only been some 20 years since the Velvet Revolution, the important thing is that it is moving forward.” 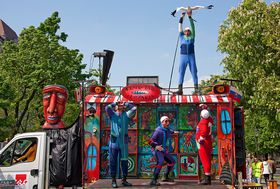 “The important element which is common to both physical and street theater is that you somehow need to open your conscience to receive the theater. In the street, you relax, you feel the passing cars, people walking by, a loud wedding, and you feel it as one huge theater, and that’s how street theater works. In a physical theater, you also need to open your mind. You need to look at it as a series of symbols and feelings, because there are no words. The story and feelings are expressed by movement of the body. You also somehow need to open your mind, to break barriers in your conscious. So, in this way, both of the festivals are working with the same method.

“We are cooperating quite closely. Programs of the festivals are made in a way that you can’t miss any of the performances. The Zero Point festival has been here for six years. They have been bring here top performers from all over Europe. This year, for example, it’s Ilsas Garden performance by Anna Peschke, or top Czech dancer Lenka Vagnerová with her performance La Loba. They are taking place at Divadlo v Celetné. And I think that all the six days of the festivals are worth it, really shouldn’t miss it.”

So, they work together. And people have a chance to see this in a way more elitist theater, where you actually have to buy a ticket and walk into the theater, and also the more open, ‘democratic’ theater of the street. 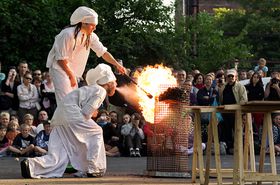 Teatr Feta, photo: Adam Bogdan “Yes. One thing about street theater is what you said – you have no deal with the promoter. You can walk out, you can walk in, you can think whatever you want, you can sing, you can take part in the performance. That is a totally different situation than in a stone theater like Celetna. But the technique is the same, you need to open your mind and to watch the theater with an open mind.” 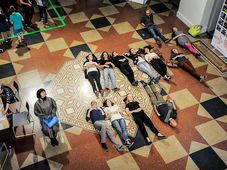 A new production entitled Here is Here is getting a lot of attention for its combination of genres from social to documentary theatre.… 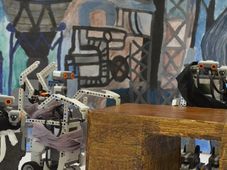 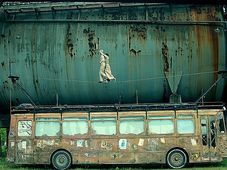 A helium balloon carrying an acrobat rose in the air above Prague’s Industrial Palace on Monday, marking the start of the city’s annual street…