Be afraid - be very afraid - and think twice before you go next go to Slovakia... In this week's edition of the Arts we look at a film that's been a huge success in the United States, but one that's making waves here in the heart of Europe - for all the wrong reasons... 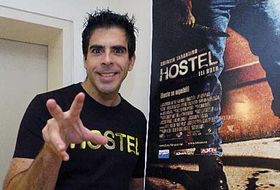 Eli Roth, photo: CTK Set in Slovakia and filmed in the Czech Republic and Germany, "Hostel" tells the story of three backpackers who are abducted and sadistically murdered during a trip to Slovakia.

The movie knocked both the Chronicles of Narnia and King Kong off the top spot during its first weekend in the United States. This week it opens in Slovakia and the Czech Republic, and it's certainly been causing a stir. Even before the film had opened some Slovaks were complaining to the authorities about the potential damage to the country's international image, and so when American director Eli Roth appeared at a packed press conference in Prague it was something of an event.

"Thank you. It's very exciting for me to be here, especially since I know that there are some people from Slovakia who probably want to kill me for making this movie. In America, Hostel is a very terrifying horror film for many people, but I truly believe it could become one of the great comedy classics here in Eastern Europe. I'm sure you have questions, and about why I made Slovakia look like all of a sudden it's from the 1950s, and what it might do to the tourist industry in Slovakia, and I look forward to answering all your questions and hopefully I will not get tortured to death." 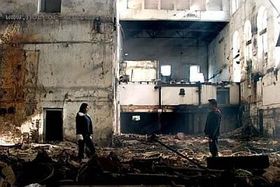 "There's a lot of nudity and a lot violence in this film. If you don't like those types of movies you should stay far, far away from this one. I think American horror movies have gone soft in the last ten or fifteen years. I miss the movies from the 1970s that Americans made, like Texas Chainsaw Massacre, and I miss the movies the Italians made like Cannibal Holocaust and Sallow. I wanted to make a movie that would be for adults and not for children. I think it's a family movie, but maybe more for the Manson family." 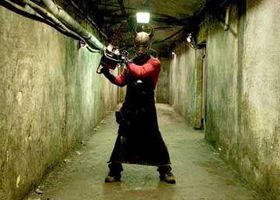 The decision to set this gory film - which was made with Czech and Slovak actors - in Slovakia has caused some dismay among Slovaks, fighting to put their tiny and little known country on the map. So why had Eli Roth chosen to portray Slovakia in this way?

"In talking to Americans, I realised they have absolutely no idea that Slovakia exists. The latest statistics I found was that 12 percent of Americans own a passport. 12 percent. They do not travel, but they think they own the world, and their dollar will buy everything. When I told people I was going to film in Prague, they said 'Oh, Czechoslovakia - bring toilet paper'. They still think it's some communist country from the 1950s. So when I said Slovakia I knew that Americans do not know the difference between the Czech Republic, Slovakia, Czechslovakia, it's just one big Eastern bloc where there's always a war going on. So Slovakia in the movie, it's not really Slovakia, it's movie Slovakia, and it's based on American stereotypes and these stereotypes, that the cars are old, the people are old, the telephones are old, these are the stereotypes that lure these guys into going there, they believe it and they pay for it. These people get punished for these beliefs. But if you look closely at the film, the people who are actually doing the worst things are other Americans. The people that are doing the torturing and killing are Americans, Japanese, Dutch, Germans and even the people running the organisation are speaking Russian. So the people of Slovakia, they're just letting it happen there. And that's more my comment on what I've seen in American beliefs in post-communist societies, where they think they can just come in and take over with their dollars and it brings out the worst in humanity and the Americans are punished for this belief." That explanation might be a little too sophisticated for the angry Slovaks who've been complaining to the Culture Ministry about what they see as a slanderous attack on their country. The Slovakia in Hostel is a wild, lawless place with children roaming the streets, corrupt policemen and loose women. But those involved in the movie say it's a tongue-in-cheek examination of American attitudes to Europe. Eythor Gudjonsson plays Icelandic teenager Oli, one of the three backpackers abducted and killed.

"My role in the movie was to show those stupid Americans how to have fun. As I know I'm a European and you're Europeans. We know how to dance, how to drink, how to have fun, and how to have sex. But they don't know. So I had to teach them. So when I was killed in the movie I died very happy."

And Eythor also told reporters what it was like to work with Eli Roth and also revisit one of his favourite countries.

"Eli is a boring sucker. But he's a great actor, so he's just acting to be funny. No, I really love him, he's a great guy to work with. What's so great about Eli is that he offers the people that are working with him to participate - would you do it differently etc etc. For me it was a great pleasure to work with them and all the people. And it was great to come to Prague. I came here first in 1989, when I was playing handball against Dukla Prague. I came back in 1992, after the revolution, and I've been here seven or eight times, and I love your country." Some are worried that Hostel will do for Slovakia's international image what Dracula did for Transylvania's in the 1930s. But Eli Roth believes the sort of people who believe Hostel is real are the sort of people who never travel in the first place. He's obviously happy about all the publicity for his gory, trashy horror film which is doing great business at the box office. And he's also convinced that when people in Slovakia and the Czech Republic actually see the film, they'll take it with a pinch of salt.

"The best think you can say about a horror movie is don't see it. I think it's the best advertising possible for the movie. And I think anyone who's protesting against the movie probably hasn't seen it, because anyone who'd seen the movie from Slovakia would say this is so obviously set in Prague, how could they take this seriously?"