A new exhibition at the Rudolfinum Gallery in Prague presents the work of 12 contemporary British artists. Entitled Beyond Reality: British Painting Today, the exhibit questions the ways of viewing reality in today’s art and reflects two particular trends: the influence of photorealism and references to 19th century academic painting. The exhibition features, among others, the authors Ben Johnson, Keith Tyson, Damien Hirst, the Chapman brothers as well as Czech-born, London-based artist Hynek Martinec. 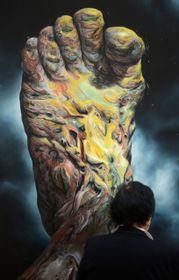 Glenn Brown - 'The Happiness in One's Pocket', photo: CTK One of the highlights of Prague’s autumn art season, the exhibition Beyond Reality: British Painting today offers an insight into some of the current trends on the British art scene. The first part of the exhibit presents authors who reflect reality with references to the photorealism of the 1960s and 70s, such as Hynek Martinec, Jason Brooks, Jonathan Wateridge, Ben Johnson, Marie Harnett, and Damien Hirst; the second part, featuring Glenn Brown, Jake and Dinos Chapman, Ged Quinn, Keith Tyson, Jonathan Wateridge and Mathew Weir, reflects the traditions of classical European painting. The curator of the exhibition, and Rudolfinum Gallery’s director Petr Nedoma explains his choice of authors.

The exhibition starts with Jason Brooks and his portraits entitled Zoe, Mr X and Natalia. Keith Tyson - 'We have a black and white?', photo: CTK “The idea of making a portrait when somebody sits in front of you for several months is seemingly to me so divorced from reality. It seems a very abstract thing for someone to sit there in front of you in that way whereas it’s more dispassionate and you have more control over what you’re doing. It also allows me to become more fetishitic and slightly voyeuristic in terms of making a painting because I’m looking at another image and also my memory. In that way, that adds something else to the process.”

Jason Brooks says the ways reality is commonly represented today is in fact not realistic.

“I’m also fascinated by that idea that a lot of the reproductions are tempered, either by being airbrushed out or stretched, or whatever. So I think we have a distortion of what reality is and for the younger generation – and maybe for the older generation as well – I think it’s quite disturbing.

“Having children and thinking how they’re growing up and what they’re looking up to and what feel they should aspire to is worrying. So I’m saying every mark, every imperfection is not an imperfection; it’s actually something to behold, and they’re the kind of things you kind of fall in love with so we should cherish those things.” 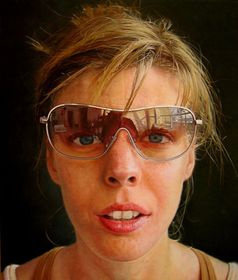 Hynek Martinec - 'Zuzana in Paris Studio' On the opposite wall, the Czech-born London based painter Hynek Martinec exhibits three portraits of his girlfriend Zuzana. His 2007 piece Zuzana in Paris Studio won the acclaimed BP Portrait award. Two of his works featured at the Prague exhibition are based on the early 19th century technique of Daguerreotype, while the third, entitled Zuzana in London, is based on digital photography.

“Here you can see the gap between the early 19th century and the digital times, as seen on the colour portrait. So I think there is a gap between the visuality of the photography. The model is the same but you can see how wide the gap is. Technically, you would say it’s a different person but it was captured at the same time. It’s quite interesting to see how magic image is. That’s what I like to paint – nearly each second is different.”

Hynek Martinec believes that finding inspiration in the past, ranging from the 18th century to the 1960s, is a trend markedly present in today’s British art.

“I think this is a new way of looking at our history through those paintings. In many exhibitions, you can see links to the 18th and 19th centuries, and that I think is really interesting because this was not here before. Maybe it’s a new way of reshaping the concept of hyperrealism from the 1960s while always believing in painting.”

The first part of the exhibition, which continues with works by Ben Johnson, Keith Tyson, Jonathan Wateridge, Marie Harret and Damien Hirst as, questions the possibilities, meaning and method of viewing reality, says curator Petr Nedoma. 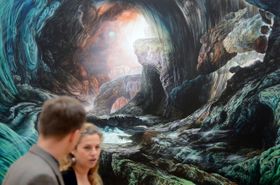 Glenn Brown - 'The Aesthetic Poor', photo: CTK “The start of the exhibition poses a question about the relation of the painting and reality where we can see reality depicted with absolute perfection. But we still feel there is something beyond the painting, that there is more to it than just the surface.

The exhibition then goes on to explore the reality’s relation to photography and various arranged realities and the references to the reality of art history. This is crucial for general reflection on our place in history as these references actualize the past and justify our existence today.”

One of the authors, Ben Johnson, emphasized the need to come and experience the works in person, which is perhaps true of any art. But in this case, any reproduction robs the works of their loaded meaning.

“One of the things that is so important with this exhibition I believe is to stand in front of the paintings and see that it’s real material being manipulated by passionate individuals. This is a very unusual environment for any artist. The artist should really only be in their studio. It’s often said the artist should be seen, not heard.” 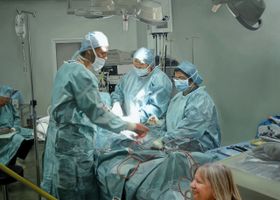 Damien Hirst - 'Surgical Procedure', photo: CTK Arguably the best-known British painter featured at the Beyond Reality exhibition, Damien Hirst, is represented by two paintings from 2007 – Surgical Procedure and Caesarian Birth. For her part, the young painter Marie Harnett brought a series of small-format pencil drawings called Gatsby based on the famous US film.

The other part of the exhibit presents authors whose works reflect the traditions of classical European panting of the past. Mathew Weir’s work incorporates elements of Flemish still lifes, 19th century figural paintings and even porcelain figurines.

“I guess that every time, I come about looking for various images, discovering different photographs, sometimes online, and visiting various museums to see certain figurines and certain objects, and also using art-historical references such as Dutch and Flemish still-life paintings, in order to take elements of art history.

Both the approaches to viewing reality as highlighted at the exhibition – references to the hyperrealism of the 20th century on the one hand and the classical European painting on the other – suggest a strong inspiration by the past. That tradition, says the exhibit’s curator Petr Nedoma, is what distinguishes European art from that proceeding from other parts of the world. Photo: CTK “Looking back into the past, whenever European culture seems to be exhausted and in need of new impulses, that’s the underlying foundation of our culture. Unlike the Americans, we don’t keep looking forward but we are poised sideways and sometimes glance back before looking ahead again.”

In the coming weeks and months, the Rudolfinum Gallery will also hold a series of lectures by the curator and some of the featured artists. The exhibit Beyond Reality: British Painting Today runs until the end of the year. Artist Hynek Martinec: To me Old Masters are contemporary 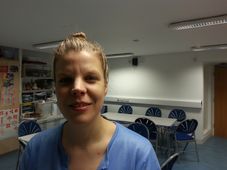 You may not know the name Zuzana Jungmannová but there’s a good chance you’ve seen her face. It appeared in great detail in the striking photorealist… 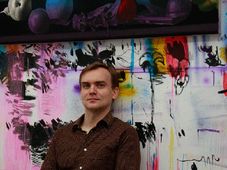 Czech painter Hynek Martinec has been living in London ever since he made a breakthrough there with his painting Zuzana in Paris Studio.…