The Archa Theatre in Prague is renowned as a space where artists and companies from around the world meet and cooperate on projects ranging from contemporary dance, theatre, music, film and multimedia performance. The theatre’s similarly eclectic band in residence – the Allstar Refjúdží Band – emerged a decade ago as part of an Archa project to tell the stories of some refugees in the Czech Republic, in part through their own music. 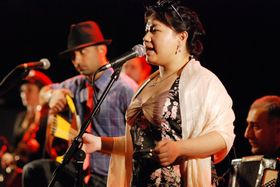 Allstar Refjúdží Band, photo: Tomáš Vodňanský / Czech Radio The band’s first hit was a cover version of the Czech national anthem – “Kde domov můj”, or “Where is my home?” – sung in Kurdish, Chinese, and Swiss. At a rehearsal ahead of their tenth anniversary concert earlier this month, musical director Philipp Schenker kindly set aside his clarinet for a while to talk about the history, composition, dynamics and ethos of the Allstar Refjúdží Band.

The band is now in its tenth year, and there are three or four people who have been with it since the beginning, but the membership is a bit fluid, is that right?

“Yes, because the beginning of the band ten years ago was in the framework of a theatre performance. And in the performance there were some migrants and refugees, also on stage – some didn’t want to act but were there as part of the [accompanying] band.”

“There’s Miran Kasem, a Kurdish singer but also hairdresser who still lives here; and Gugar Manukjan, an Armenian from Georgia, an accordionist – and he’s also a hairdresser, actually; and Jing Lu, she’s Chinese, a signer and a performer. They were there already in the beginning and me too.”

“There have been a lot of other members but nevertheless the band kept going and it’s more of a project – it’s not a usual band. There are usually ten people, sometimes more.”

And how did the name come about? It’s a kind of phonetic Czech spelling of the word refugee. 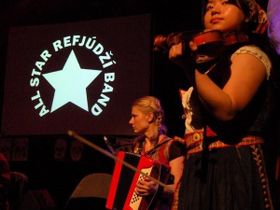 Allstar Refjúdží Band, photo: archive of Allstar Refjúdží Band “Yes, that was just kind of an irony, to write this English word in a Czech linguistic style. But the name came just because that first show was about refugees. It was called ‘Dance Over the Fence’. The director, Jana Svobodová was developing the performance. She already had been doing workshops and performances in refugee camps, so it has a longer history, this whole theme of refugees.”

So, originally the music was accompanying live theatre on stage and then it developed to become a band?

“Exactly. First the band and the actors that were with us, the migrants that were with us, we were building this band together, and we played some songs between the scenes. And because people liked it a lot, the theatre decided to support the production of a first CD. Then we started to play concerts at all kinds of festivals and events, mostly of NGOs.”

“Theatre Archa, already over almost fifteen years, has been developing performances of documentary theatre – not only about migration; of course, there are all kinds of themes. And Theatre Archa invites groups from all over the world and also gives residences to groups that work in the style of documentary theatre. So, this is really a very importance dramaturgical line at Archa, and that’s also why the theatre has been supporting the band over these ten years.”

The three long-term members who you mentioned – one is Chinese, one Armenian, one a Kurd, who is from Syria – did they all come here as refugees? 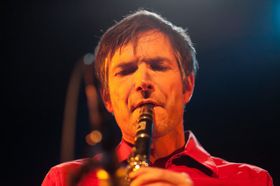 Philipp Schenker, photo: archive of Allstar Refjúdží Band “Miran Kasem came as a refugee, and Gugar Manukjan applied for asylum, but it was kind of complicated – all this bureaucracy in making these projects and having this band. But the reason we have this band is of course, the emotions in music really connects people and then the language doesn’t matter so much, and also not the cultural background. This is what’s really beautiful about the music.”

“And it’s definitely also important to mention here the composer who worked with us and made the two CDs with us, Michael Romanyshyn. He was one of the main band leaders, musicians, of Bread and Puppets, a famous American theatre group. He was very helpful because he was used to working with complete amateur musicians as well as highly professional musicians. “

“I like a lot the way he worked with us – everyone was proposing musical themes, texts, and the purpose was really also to make a meeting of different styles in one song, so it’s not clean ethno-music.”

“For me, this is also the fun in the music – that in the same song, you try to combine styles that normally don’t belong together. And that’s actually part of the message. We can co-exist together, and it’s even more interesting if you can feel the edges of different cultures. It can be even more fun.”

Speaking of these different strains of music, you have elements of Dixieland, Swiss mountain songs, Turkish and Armenian rhythms – maybe you could tell us about a specific song, how it came to be?

The Allstar Refjúdží Band will stage a pre-Christmas concert on December 16th at Café V Lese in Prague. www.asrb.cz/asrb

“Often we just improvised. Michael Romanyshyn brought some of the jazz themes, Miran Kasem had the Kurdish texts and some of the music is also from him, Gugar Manukjan influenced several songs with Eastern folk music – he knows many dances, from Armenia, and all the countries of the former Soviet Union. Jing Lu, brought in many texts, and songs and styles of signing which are Chinese.”

“So, in this way, it was really a collaboration. Michael Romanyshyn arranged the songs, but in fact we don’t have any written music. All the songs we play – or ninety-eight percent – is unwritten music; it was really developed together.” 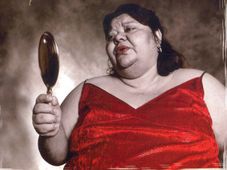 Věra Bílá died of a heart attack this week, days before her scheduled comeback tour. The Roma singer, who was widely regarded as a… 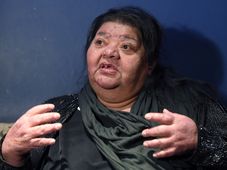 It was supposed to be the week when she started her comeback tour. Instead, it ended with her death on a hospital bed. Věra Bílá, who… 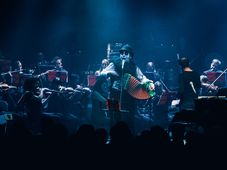