One ring to rule them all: "The Ring of the Nibelung" at the National Theater

The works of Richard Wagner form a cornerstone of German opera. His best known work is probably the cycle "The Ring of the Nibelung". The saga which consists of four parts is based on stories from German mythology, an incredible 16 hours long. Because of its length it is extremely demanding for artists to perform and it has been rare for opera houses to feature the complete cycle in a single season. But, the Prague National theatre has now decided to make an exception, presenting the entire Ring of the Nibelung to Czech opera fans.

The head of the National Theater opera section, Jiri Nekvasil, explains why he and his colleagues took on such a challenge.

"The main reason was that the "Ring Cycle" has never been performed in the history of the National Theatre. It was performed here but only in German theaters. The first one was in the Estates' Theater which was a German than. The first "Ring" in Prague, in the German theater was 11 years after the first "Ring" in Bayreuth in 1887. I think now it is a historical point to bring this monument of European culture to Prague again."

Members of the National Theater realized it would be no small task to offer the "Ring" in its entirety and asked the "Deutsche Oper am Rhein" from Dusseldorf - with extensive experience with Wagner's music - for help. The German partner brought its singers to Prague, provided most of the backgrounds and props, and brought an overall conception to the project. The Prague National Theater, meanwhile, provided the orchestra, choir and a few soloists. Kurt Horres, who is the director of the performance, confirms that it was a great challenge. But as he says, he was pleased by the enthusiasm of the National Theater management.

"I think it is a crazy idea to perform the entire "Ring" within one season! When the director of the National Theater Daniel Dvorak came and asked whether it would be possible to materialize this idea, I thought it was crazy. But he is a stage manager who is a theater man: he is not only a manager - he comes from the stage. So we went through it. It was a very long and fruitful conversation and in the end we said: 'All right, let's try it!' And so that happened. But these things are matter of chemistry. You can do it only if you are on the same wave length."

One of the reasons why they agreed with the co-production was that they considered it a matter of prestige to perform at Prague's National Theater.

"For me Prague has always been one of the most beautiful (if not the most beautiful) city in the world. We appreciate the chance and honor to play in this theater. Most of the theaters in Germany have been destroyed; they have been rebuilt after World War II. We have nowhere a theater that is nearly as beautiful as this one. The house sounds fantastic; the acoustic in this house is sensational! So believe me; we feel like a fiddle player who gets a new Stradivari to play."

The conductor John Fiore says it was a difficult undertaking especially for the orchestra but he is very happy with the outcome.

"It is very interesting that here - although my cast has sung it a lot and the production is not new - the new element is the orchestra. It's a tremendous challenge for the orchestra to play the "Ring" at all. It's a challenge for any orchestra. It is tremendous if you realize that this orchestra is playing it for the first time, having never played any of it, to do it now at once. I don't think that any orchestra has ever done this. I think that Prague and the opera house must be very proud and must give a lot of thanks to the orchestra for the work they do."

The story of the opera takes place in the world of Germanic gods, dwarves, and giants. The music is very much interconnected with the story and to play it well it is necessary to comprehend the message. In order to achieve a better outcome John Fiore (originally from the U.S.) learned basic Czech to be able to explain some of the main ideas and themes.

"The orchestra here is very responsive; they want to play it very well and they know I love it very much. I try to explain to them somewhat in my very broken Czech what some of the motives mean. The style of the music and the way of playing is of course far heavier then what you are used to playing in Czech opera. So it's a question of weight, weight into the sound - how to make deeper sounds and heavy boasts - the rich sounds you need for Wagner. I'm trying to explain them some of the motives as far as the story is concerned; like what is a sword - the "mec", the "drak", the "ptak" or Siegfried but the "Ring" is so rich in motives, in the story and in mythology that you can't possibly explain it all."

Wagner came from the German region of Saxony, not far from Czech border. In fact, the very first draft of the Ring - titled "Siegfried's death" - was written during his stay in the Czech town of Marienbad or Marianske Lazne. But even though Richard Wagner's music also influenced Czech romantic composers like Bedrich Smetana, Antonin Dvorak and Zdenek Fibich, it has not been often featured in Czech theaters in the past.

"Wagner's music has not been so often on the repertoire of the National Theater. The last one was the successful production of 'Tristian and Isolde' which was conducted by Jiri Kout. Before 1989, in the late 80's National Theater featured 'Flying Dutchman'. But Wagner's music is not performed as often as in Germany but I think this experience with the "Ring" is a historical point for the reception of this music."

One of the reasons why Wagner has not been performed that often here is because his pieces are generally considered either too mythological or simply too exhausting for performers and audiences alike. Others continue to associate his music with German nationalism. (Richard Wagner has often been mentioned as Adolf Hitler's favorite composer.) At the same time, stories based on Norse mythology very similar to themes used by Wagner have gained popularity recently - above all thanks to the films based on J.R.R Tolkiens' "The Lord of the Rings". It is quite possible that this association will help in reviving Wagner's music too, even among the younger generation. 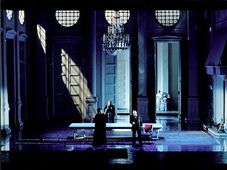 Wagner's "Ring" performed in its entirety for first time in Prague