One of the highlights of Prague's cultural calendar in recent years has been the Music on Film Film on Music (MOFFOM) festival. It brings together often hard to find music documentaries, and also features live concerts and other events. The 2007 MOFFOM has just got underway, and continues until Sunday. On the eve of the festival, programme director Keith Jones explained how it had changed since its inception in 2004:

"Every year the festival seems to grow, in terms of its reputation with the audience, the number of people who are visiting the cinemas, and also in terms of the level of media awareness that's around it.

"But at the same time I think it still retains this very informal, intimate, chamber sort of atmosphere in the festival spaces while it's going on. I think the party atmosphere and the festivity of the thing has really remained the same.

"Also I think our reputation is a little more global - we have more access to different corners of the world, and to different countries, and we're able to represent music films from different parts of society that we didn't have in the earlier years.

"So the thing has grown in some ways, but I think it's very much the same project as from the beginning."

One of the films being screened this year features Eugene Hutz of the New York Ukrainian band Gogol Bordello. It's called The Pied Piper of Hutzovina, and follows the charismatic singer on a journey of exploration of Gypsy music in Ukraine. The film was made by Prague born director Pavla Fleischer:

"With Eugene, I was interested in him because he had a vast knowledge of gypsy music. He introduced me to the gypsy music of Russia and Ukraine, and it was such a wonderful world that I fell in love with not just that world, but Eugene as well. So I decided to make a film about him."

The Pied Piper of Hutzovina was filmed in Ukraine. But it's a neighbouring country that is the special focus of this year's MOFFOM. Keith Jones again:

"Every year we do a country focus and look at music cinema from a particular country. In the past we've successfully done that with Brazil and South Africa.

"This year we chose to do Russia, which is interesting because we seem to find ourselves in the middle of a wave of growing interest, or a re-emergence of interest, in Russian culture in the Czech lands more generally. It's a nice thing to see that pattern in other cultural events that are taking place in Prague during the autumn.

"For us it was a simple and easy thing to come to a focus on Russia, because there's a number of very good new films by outstanding film-makers about Russian classical music that have emerged in the last year - brand new films. 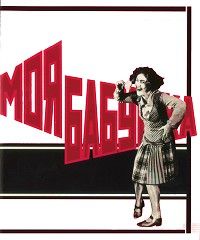 "At the same time there are some very noteworthy and interesting films that are about alternative sides of Russian culture that are maybe a few years old but have never been shown here, because of this kind of taboo around Russian subjects during the 1990s.

"So we actually have the best of both worlds - we have some classic films which we're showing here for the first time, and some outstanding and very new films from Russia."

Are there any particular films that you yourself would recommend, or that you are particularly excited about?

"As the programme director that's a very difficult question for me, because I really believe in all of the films. They're in the programme for a reason and we stand by them - so I would recommend pretty much anything that's in the programme.

"All of the 15 films in that are really good and they're all worth a look: Orqestra Tipica from Argentina and Suffering and Smiling from Nigeria, The Pied Piper of Hutzovina - a British-Czech film made in Ukraine...They are very diverse films - there are films about samba, reggae, American country music, all types of genres, even heavy metal and punk, through to more ethnographic themes. So covering a very wide spectrum.

"All of the films actually have some very contemporary and interesting story about them - so I'm happy we're able to present them within one competition." 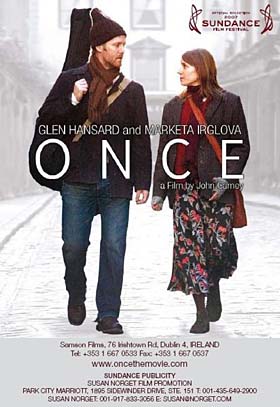 There are nearly 60 films in this year's MOFFOM, though perhaps the highlight of the whole festival will be a special screening of the Irish film Once. Its two stars - Irish musician Glen Hansard and Czech musician Marketa Irglova - will perform a live concert to accompany the film, with the event sold-out well in advance. The female lead described her experience of making Once to Radio Prague earlier this year:

"It was very, very hard. It was much harder than music, because music is very sincere really. You write about things that happened to you in your life and then you go and sing about them. And they feel real to you. They're really things that happened and that you've experienced and you're singing about them quite openly to people, whereas film is about pretending and it's a very different thing.

"It's quite emotionally exhausting because if you wake up and you're quite tired and you're in a bad mood or something's made you sad and then you have to go shoot a scene where you're supposed to be happy, it takes a lot out of you. I loved watching it afterwards. I loved seeing what it became, but I didn't enjoy the process so much." 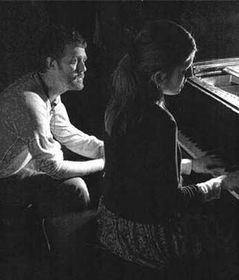 Marketa Irglova and Glen Hansard Since Marketa Irglova spoke to us in March, Once has become a big hit, particularly in America, where it has won awards, rave reviews and some famous fans, including Stephen Spielberg. Saturday's screening is the first time Czech audience will get a chance to see the movie, directed by John Carney. The Glen Hansard-Marketa Irglova concert is a bit of a coup for MOFFOM. Keith Jones:

"We decided to show the film months ago, sort of before it became such a huge hit in the US. It took us by surprise, as it did many people in the Czech audience, that enormous runaway success that the film had in the US. I think it's even a bit bewildering for Glen and Marketa that the film has done that sort of business.

"We're happy to present the film in its distribution premiere, in association with Bonton films. As part of that event Glen and Marketa will play a concert in the historic Lucerna cinema of the cycle of songs which they are shown performing and composing in the film. It should be a very nice and unique event with a good atmosphere. It will be a pleasure to have Glen Hansard and Marketa Irglova as our guests this year." 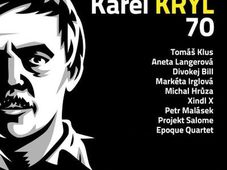 This edition of Sunday Music Show is dedicated to the songs of the legendary protest singer Karel Kryl, interpreted by some of the… 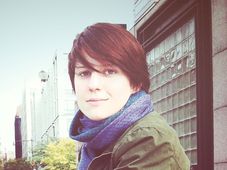 Markéta Irglová: From Oscar success with Once to solo career with poetic Anar

Markéta Irglová is a Moravian-born, internationally known singer, songwriter and pianist who records exclusively in English. The modest musician… 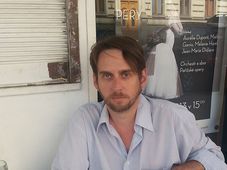 In this edition of the programme, documentary maker Keith Jones takes us on a tour of Letná, the neighbourhood of the Czech capital…