‘Maoriavian’ Frank Tomas Grapl Junior: It’s important to know where you come from and where you’re going

Haka is a traditional Māori dance, which became world-famous thanks to the New Zealand rugby team All Blacks, who perform the dance during their pre-match ritual. It was performed by the Whakaari Rotorua group from New Zealand at the Prague folklore festival. Kristýna Maková met with the group’s leader, Frank Tomas Grapl Junior, who has both Māori and Czech roots. She first asked him what kind of music they brought to the Czech Republic: 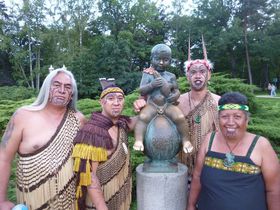 Whakaari Rotorua in Františkovy Lázně, photo: Kateřina Svobodová / archive of Whakaari Rotorua “We perform native Māori culture dances from the indigenous people of New Zealand. In Māori, New Zealand is called Aotearoa, which means ‘The Land of the Long White Cloud.’ So we are bringing The Land of the Long White Cloud to perform for all the different people from different cultures, and especially the Czech culture all over the Czech Republic.”

And where have you been?

“We were in Šumperk, in Liptál, in Brno, in Vsetín, in Zlín, in Praha, Karlovy Vary, Ostrava, Olomouc, Frýdek-Místek, Lednice and Břeclav.”

You have also roots in the Czech Republic.

“Yes, that was the first reason why I started coming here, because of my father. He was from Brno. In 1950, he emigrated from Czechoslovakia to New Zealand to escape the prison of Communism.

“He wanted his freedom, but he always dreamt of coming back, not just to Czechoslovakia, but also when it was the Czech Republic and Slovakia. And when my father died, I continued the tradition, to keep the Czechs and our Māori culture together, to share each other’s cultures.”

And have you been successful in it? 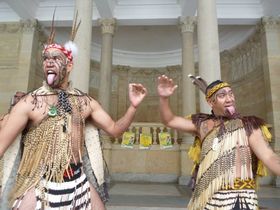 Frank Tomas Grapl Junior and Eru Haimona during the performance, photo: Kateřina Svobodová / archive of Whakaari Rotorua “A good example of our success, I hope, is the exhibition in Pilsen. It was an exhibition of 58 Māori portraits that were brought to Pilsen from New Zealand. It was the first time in history they took this Māori exhibition outside the New Zealand.

“They chose the Czech Republic and Pilsen, because the painter of these portraits, of these famous Māori people, who are related to us by blood, was Czech. His name was Bohumír Gottfried Lindauer and he is the most famous painter in our country, actually. We even have a top selling wine named after him: Lindauer. So the most famous wine is named after a Czech.

“We were there to close the exhibition to give our blessing before they were taking it back to the New Zealand and to show how proud we are to keep the Czech and Māori connection. At the end of the exhibition, everybody was singing ‘Kde domov můj’. So I started singing... And everybody started singing together.

“So that was the connection: we are so far away from home, like the Czech painter Lindauer was, when he decided to stay in New Zealand. We have been here in the Czech Republic for so long. Where is our home? This is our home now, just like it was for my father and just like it is for me, because I am half Czech and half Māori.”

You talked about Bohumír Lindauer, the painter. Can you explain why the paintings never left the country before? 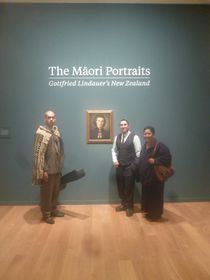 Frank Tomas Grapl Junior, Eru Haimona and Tuhi Grapl at the The Maori Portraits: Gottfried Lindauer's New Zealand exhbition, photo: archive of Frank Tomas Grapl Junior / Whakaari Rotorua “Some Māoris have certain suspicions about the European people, because of our past history with the British Empire: ‘What will happen if they take our paintings? Would they keep it in Europe and never bring it back?’

“The Māori people are very spiritual, so when we see those paintings, it’s not just: ‘Oh, wow, this looks nice.’ We feel like we are looking in the people’s eyes, as if we are looking into the mirror. We see it from a different perspective. It’s almost like: ‘You are taking our people away from us, should we let you do it? Because we don’t know if you will let our people to come back.’

“The Czech people and Pilsen were so amazing, with the support from Prague. They were very sensitive to the Māori people’s feelings, ensuring them that they will take the best care of that and nothing will happen and everything will come back.

“They invited many of the tribes that are connected with these paintings, a special guest to Pilsen and in Prague. And after that, everybody said: ‘Okay, we can trust you and we can take it to the Europe for the first time’.

“So we’re really making history. The Czechs have gained the trust of the Māori people and the Māori people accepted that. So if there was another exhibition anywhere else in Europe or some other part of the world, it’s because of the Czech people. We have to thank them for caring and for being sensitive.”

Have you visited the town where your father was born? 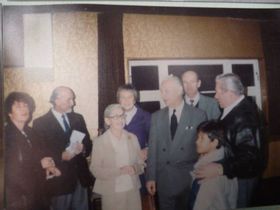 8-year-old Frank Tomas Grapl Junior with his father (first from right) and Alexander Dubček (fourth from right), photo: archive of Frank Tomas Grapl Junior / Whakaari Rotorua “Yes, many times. I was in Brno. I have a family there, from my father’s side, of course. It’s my roots, you know, and they have really good slivovice there. I call myself like Moravian Māori or Māori-avian, the new breed of a Czech Māori, one of the first.

“I learned a lot of those lessons from Alexander Dubček, who was a good friend of my father. He came to stay with us in my city, Rotorua. He came in 1990 and stayed for us for four days. I was only eight years old at that time and now I am 33. But I remember asking him many questions about the differences between Czechoslovakia at the time and New Zealand.

“Now I appreciate how far things have come, how many things have changed in the Czech Republic and Slovakia. We all have problems in our countries, but I think we are progressing to be better. And there is only one way we can do it: to move forward together.

“Alexander Dubček was trying to do that with the Prague Spring. I think many of his dreams have come true now, what he was trying to do many years ago. And we try to do the same thing through our culture.”

Can you tell me more about your group Whakaari Rotorua? 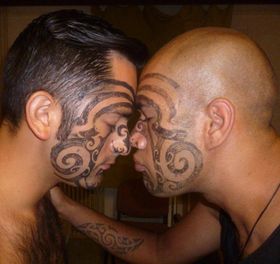 Hongi - a traditional Māori greeting, photo: Kateřina Svobodová / archive of Whakaari Rotorua “Whakaari Rotorua is our name and ‘whakaari’ means to exhibit. Rotorua means ‘Two Lakes’ or you can say ‘Second Lake’. So we are exhibiting the Two Lakes of our city, of our tourism. It’s symbolic to say: Whakaari Rotorua, ‘To Exhibit Rotorua’, not only as a city, but as our country.

“So that’s why we have very strong roots. It’s the same with my group. My mother is here with me. I have my Māori roots from her. We have the support from other members in our group. And we can’t always just sing at home. We should take our culture to the world. That’s why we are here. And everybody responded perfectly. We couldn´t be happier.”

How do you feel in the New Zealand, being half Czech or half Moravian?

“I feel at home. This is my second home, here in the Czech Republic and New Zealand is the same. We are very multicultural now. And we have been multicultural for a long time. So it’s not a problem being from this or that culture, because everybody is accepting. In New Zealand, if you see a dark person, you say: ‘Really, is that a dark person?’ I don´t see any colour.

“When I was greeting with you with the nose, we do that with all the cultures. It’s normal, even with strangers. While you say "ahoj" or "dobrý den", we say "Kia ora". That’s our alternative for shaking hands. To breathe in each other’s spirits, to become as one. That’s why we do nose to nose. And our spirits are together.”

Do you know some Czechs living in New Zealand? 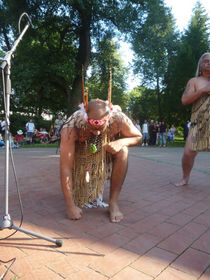 Frank Tomas Grapl Junior in Vsetín, photo: archive of Frank Tomas Grapl Junior / Whakaari Rotorua “There are many Czechs living there at the moment, and Slovaks too. We have some very big communities, and they are growing more and more. I am helping them as much as possible. I get many Czech tourists who come and stay with me. Or they request me from some other friends they now. And I say: ‘No problem, my door is open, you can come and stay.’

“We had a huge relationship with the Czech people in New Zealand for the last 250 years. It’s a big community, not far from the biggest city Auckland, it is called Průhoj. And ever since the first Czechs arrived in the late 1700s, it´s been growing little bit by little bit...

Will you be coming back to the Czech Republic?

“We would love to. We were invited many times to come back here and we are always happy to come back. It’s not easy to travel such a long distance, but for such a long time.

“A lot of people ask me why we come to Czech Republic more than the other countries. It’s not just because I am half Czech, it’s because of your hospitality. So to everybody who’s listening now, I would like to say: Díky moc. Na shledanou.”

Frank Tomas Grapl Junior and his cultural group Whakaari Rotorua will come to the Czech Republic again this year. He will be touring the country between September and December. 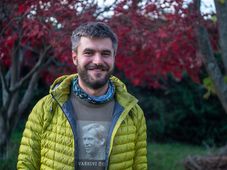 New Zealand has one of the world’s best records on Covid-19, with fewer than 1,300 detected cases and two dozen deaths to date. Among…

A child survivor of the Holocaust who was interned at Terezin at the tender age of five, Vera Egermayer could be forgiven for wanting… 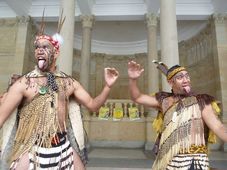