Libor Pesek - Czech conductor and Knight of the British Empire

Hello and welcome to another Encore. Libor Pesek is one of the best known Czech conductors. A few weeks ago he celebrated his seventieth birthday - although, with his sheer energy and joie-de-vivre, you have the impression of a man a good ten years younger. In a career spanning nearly fifty years, he went from being trombonist in a jazz band, to a celebrated decade from 1987 to 1997 as chief conductor of the Royal Liverpool Philharmonic in Britain. For his work with the orchestra, he was made an honorary Knight of the British Empire, and he remains their conductor laureate. His great musical love is the Czech turn-of-the century composer and Dvorak's pupil and son-in-law, Josef Suk. A few days ago I had the pleasure of joining Libor Pesek for a glass of champagne outside Prague's Rudolfinum concert hall, and he began our conversation by telling me that it was thanks to his passion for Suk that he found his way to the Liverpool Philharmonic.

Libor Pesek: "It's funny because I was invited to conduct a concert with the Philharmonia Orchestra in London, and one of my programme propositions was Suk's big symphony Asrael, and somehow, at that time the Philharmonia Orchestra was hesitant to present it. But this music programmer in Liverpool heard about a Czech conductor in London who wanted to do that, so he came over to London and said: 'If you want to do Asrael, come to Liverpool.' So I did and I was offered the position after two concerts."

So it just clicked, basically.

Why do you think it was? Where was the chemistry?

Libor Pesek:: "First of all, they were short of ideas, whom they want, and secondly I think I somehow fitted into the whole pattern of the spirit of Liverpool and the orchestra. I was very well prepared and the unknown symphony had unexpected success with the public and the orchestra and everything, so it was immediate really."

Libor Pesek:: "You would be surprised how little different it is, because all the orchestras in the world have many things in common. Of course the local situation differs, but the spirit of orchestras is all the same, and if you are mature enough to be a little bit more psychological, you know how to deal with orchestras."

Did you occasionally feel homesick?

Libor Pesek:: "Not at all, because my pattern of visits was so that I visited once a month, for one week, two weeks. So my home still was in Prague, and secondly I stayed in the Adelphi, the famous Adelphi Hotel. It was great fun, and still is, because whenever I come back I have to stay in the Adelphi. So that is the old England as it used to be, so I had great fun there, and of course, the friends and everything there - the colleagues were wonderful."

While you were there the orchestra was extremely successful. You made a whole string of very well reviewed recordings, you went on tours - how did it happen?

Libor Pesek:: "It happened primarily because the time was right for presenting unknown pieces in Britain - even Czech pieces - and also it was still a right time to make some recordings. We recorded for Virgin Classics. Also the touring wasn't dead. Everything now is gone. I think the gramophone industry is sleeping - hibernating, let's hope. Look around, no orchestra tours."

Why is that? There's not less interest in classical music, is there?

Libor Pesek:: "It's more a question for a sociologist than for a musician why is that. But it is so. Lack of money, or people aiming elsewhere in their cultural interests. I don't know."

And part of what you managed to do with the Liverpool Philharmonic was also to introduce part of the Czech repertoire. That must have been fun.

Libor Pesek:: "That was fun, and it was also very rewarding for me, because I could conduct some great works of Josef Suk for the first time in Britain, because in Prague there wasn't that much interest in those works, so I could realize what I wanted in Britain - a very surprising situation."

Going back a bit - your early career wasn't exactly a typical well-known conductor's career, was it? You were always a bit of a jazzman.

Libor Pesek:: "Yes, that's true, and I have to say that I have the best and sweetest memories of my jazz years. Of course, I was just a trombone player. I had also my swing orchestra. You know how it is. Once you change the trains, and I changed one for classical music, the other train, the former train, just goes away and you miss it, you never jump on the former train any more, and I'm very sorry sometimes, because I wish I could be like Previn or someone - some of the people who can do both."

But jazz and classical music are so intertwined, aren't they?

Libor Pesek:: "Absolutely. There are many things which I have learned, like the feel for sound. I think that with a big band the "sound" is almost everything. When I came to Liverpool one of my few really strong points was that I was able to build up a typical sound of an orchestra, because the orchestra was very good, professionally very good, when I came in, but I somehow - with my former taste for sound - I hope I succeeded in building a special sound of the orchestra, which there still is."

And finally, what are your plans for the future?

Libor Pesek:: "I don't have any specific plans. I wish I could conduct now and then, stay a person who can be a shadow behind the young conductors, just to keep the fire of tradition going on, because many things should be remembered and revived from the past and I would be one of the guardians of the old way of conducting."

So you're not going to be retiring just yet.

Libor Pesek:: "No, unfortunately not. I wish I could!" 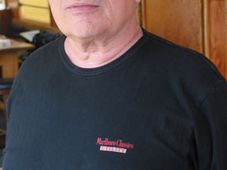 Libor Pesek and the liberators who trod on the flowers

Libor Pesek is one of the best-known and most respected Czech conductors, famous in the English-speaking world for the ten successful…