This week's Arts focuses on Czech film. Jan Velinger looks at "Beauty in Trouble" - a new feature by director Jan Hrebejk - while Jarka Halkova talks to the creator of a new animated movie currently in production. 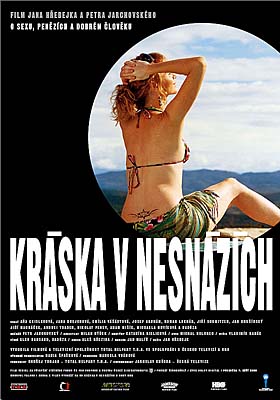 'Beauty in Trouble' Kraska v Nesnazich - Beauty in Trouble - is the latest film by Jan Hrebejk, one of the Czech Republic's most sought after directors, whose films like "Divided We Fall", and "Up & Down" made headlines in the past. Beauty in Trouble - inspired by the Robert Graves poem of the same name - promises to be another success: it's funny, at times tense, and overall is very well-acted by some of the Czech Republic's best screen & stage performers: an aging but still very debonair Josef Abrham, the legendary Jana Brejchova, the inimitable Jiri Schmitzer, as well as a cast of younger stars like Ana Geislerova, who especially shines.

She is the "beauty" in trouble mentioned in the film's title: a young mother of two in love with two very different men at the same time. At a recent screening I was able to ask the actress how she enjoyed the part, as well as acting alongside Abrham, who plays the older man she falls for in the film. In real life, she knew him from way back when she was a little girl when he voiced her favourite "Vecernicek", a famous animated children's series that still runs on TV today. Here's how she liked working on "Beauty in Trouble". 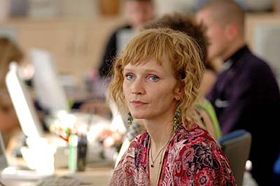 "I enjoyed it a lot: I loved the character because she's so completely different than I am, and I had a lot of fun working on it. As for the dynamic, it worked. It was fun and we had a nice 'relationship'. He is my idol from childhood, from Vecernicek, so I was always making fun of it, that I was having a relationship with my Vecernicek!"

One of the strengths of the film is the director's approach to character, showing different behaviour in many different situations. Ana Geislerova again:

"I think its like... when you get older you realise that nothing is just black or white and that even the 'whitest' white has a shade of black, so I think it's in people. Nobody is just good or evil, and we tried to show this in many scenes. I really enjoyed it. " 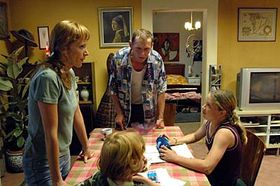 Ana Geislerova and Jiri Schmitzer Ana's character "Marcela" faces decisions often directly at odds with each other: should she face her responsibilities or enjoy a night out on the town? Retreat to her mother's or face her crumbling marriage head-on? Tell her children the truth about their father being a petty car thief, or not? And, ultimately, choosing between an uncertain hand-to-mouth existence in Prague or living a gorgeous but somewhat sheltered life in beautiful Tuscany. It is not as easy a decision as you might think, and the story is full of such dilemmas as well as moral and emotional ambiguities - for all the characters, something director Jan Hrebejk and his stalwart screenwriter Jarchovsky seem to relish.

Another impressive character worth mentioning is played by Jiri Schmitzer: the aging step-father who is really rather despicable, yet, somehow grows on you despite his "warts", the worst of which are downright cowardliness and hypocrisy. But, Schmitzer seemed more than satisfied with the role he played: 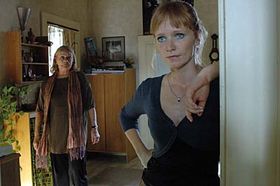 "I've played a few 'dubious' characters in the past, but it's true I don't think I had a role quite like this one. I have a feeling it may be a move towards something not that bad at the end of my life. I mean, rather, the second half!"

How good is Beauty in Trouble? It's a small character drama but it is beautifully shot and features excellent performances: a real pleasure to watch the actors in these skins. Producers have plugged the film as the story of sex, money, and a good man, and it is certainly that. But, it is namely the story of a beauty - a little messed, up, certainly, but one who, in the end finds a solution that is somehow fitting and somehow the best of both worlds. After success at this year's Karlovy Vary film festival, "Beauty in Trouble" will now continue on the festival circuit in North America and first up is Toronto.

The hero of the very first animated full-length feature Czech film is a goat, a pet belonging to the character Kuba, who has come to Prague to try and find a job. Before long Kuba falls in love and his goat gets rather jealous. The film is based on Fables of Old Prague and is going to picture five main protagonists and seventy secondary characters.

The movie's director, scriptwriter and animator Jan Tomanek has bet the success of his first full-length animated film on the fact that Prague is well known and that the plot of a friendship between an animal and a boy is a timeless and global theme.

"It is my film. Compared to work on other animated films I am the only director. For example in Shrek there were four artists, scriptwriters and three directors who produced it. Although it is a great movie it is noticeable. The character of Shrek is stylized differently than other minor roles that were not done with as much care. If a film has only one director and a small team of people, in our case just ten, it has a much more intimate atmosphere. It is the same as with Czech movies such as Kolja, the winner of the Oscar and many others. Americans would not be able to make single shot with so few people but we are able to. They all need ten assistants and the result is just the same."

Jan Tomanek lives and breathes for his movie. Especially after the many difficulties he experienced getting it off the ground. The idea for the movie came to life in 2003 when the EU gave him a grant. He frankly admits that the competition today is much tougher and the conditions, he says, somehow ridiculous. Since the grant is only to cover the movie's pre-production development, Tomanek had to look for investors and make them believe in the movie.

"It is rather sad that there are so few animated movies being made here. On one hand, people who can do something about it moan that it is so bad. On the other, the same people turn you down when you come with a grant from the EU asking for some more financial support. Well the Czech Republic is a small pond and the pond for animated film is even smaller. People who make decisions about grants are usually connected with those who are given one. For example they are authors of a script for the movie or have already agreed on a future cooperation. It is not objective and most of all not independent."

The movie should get to cinemas here in the spring of 2008. Negotiations about possibilities of its screening abroad are already in progress. As Jan Tomanek puts it, it is the only way how any film can cover costs. And maybe creators of the second and the third Czech full-length animated movie will be in a much better position.

"It is very difficult to persuade people in the Czech Republic. Czechs don't trust anything unless it comes from the West or somebody else has done it before. Those who are first are in a very difficult situation. It was just the same with the movie for teenagers 'Snowbordaci' - or Snowboarders. Nobody believed it would be successful. Now after the huge success many similar films are being produced. When a script for the first Czech soap opera was offered to TV Nova, they showed no interest at all. And these days every single TV channel has five or six of them." 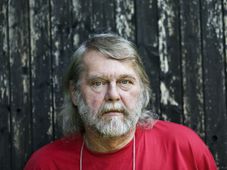 Friends recall writer Petr Šabach, whose stories became the basis for some of the best-loved Czech films of recent years and who died… 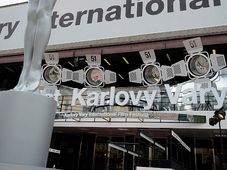 The 51st edition of the Karlovy Vary International Film Festival gets underway in the West Bohemian spa town on Friday evening. As…