The 17th Ji.hlava International Documentary Film Festival has just taken place in the capital of the central Vysočina region. Far and away the most important event of its kind in the country, it draws scores of directors from home and abroad and plays a key role in the thriving Czech documentary scene. 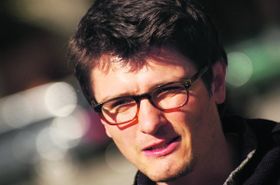 Marek Hovorka, photo: archive of Ji.hlava Film Festival The intimate festival was started by Marek Hovorka and some friends when he was still at secondary school.

“The main aim was to bring documentary films to cinemas and show them on screen. During these 17 years we could see and maybe also help filmmakers make more films, get more press attention and also, let’s say, make it possible for a bigger audience to see these films in cinemas. Last year in the Czech Republic alone there were something like 25 documentary films in real distribution. In 1997 there were none.”

Hovorka, the festival’s director, was born in Jihlava. Speaking as the event was drawing to a close on Monday night, he said the fact it takes place in a regional centre a couple of hours from Prague is one reason it has succeeded in creating its own niche.

“Even in the first edition I saw that it’s really good to have the festival in this kind of town, where everything is close. Also, the audience, the people who want to see those films, have to come. If they decide to come, it completely changes their life. They stay for those three, four, five days, just concentrated on those films, on the special festival programme, on all these concerts and discussions and whatever. And it makes a great atmosphere.”

Lukáš Kokeš co-directed Fortress, last year’s winner of Ji.hlava’s most important competition, Czech Joy, which is pretty much the Oscar of local documentary making. This year Kokeš was on the jury for that award and also presented his latest work, V.I.P., Vietnamese Important People. For him too, the small city setting adds a lot.

“That’s what I like the most. That people are focused and concentrated on documentary films. In Prague it would be different, because there is much more culture going on. Here you are closed in cinemas and you are focused on what’s going on on the projection screen.”

“Yeah, but when it’s cold people are forced to stay in the cinemas. So maybe that’s a good strategy chosen by the organisers – how to keep people inside cinemas.” 'Byeway', photo: archive of Ji.hlava Film Festival The documentary that opened this year’s Ji.hlava was Byeway, which follows efforts over several years to build a stretch of motorway through protected countryside in north Bohemia. It was directed by Ivo Bystřičan.

“When the locals discovered that they were planning to build a highway there, I was shocked at the idea they could destroy that landscape. I didn’t believe it’d happen, but then they started to build. And then I became interested in what the motorway would create between the people – and what it would bring to the area while it was being built.”

Byeway was actually only one of two works that Ivo Bystřičan had in this year’s Czech Joy category. His very different second entry was the TV film My Latest 150,000 Cigarettes. Partly inspired by Morgan Spurlock’s Super Size Me, its starting point was his own efforts to quit smoking.

“I tried to create a mix of approaches used on TV that I like. My aim was to use them to inform people about the tobacco industry’s influence on politicians by taking a personal approach and employing a video diary, graphs, animation, etc. But unlike in Super Size Me, I’m not doing something I hate. On the contrary, I want to stop doing something I hate.”

Martin Dušek also presented his latest work in Ji.hlava. Team Analog follows a group of early Czechoslovak Television employees, now in their 80s, as they produce a new show together today. Though it is in places hilarious, old animosities and the limitations imposed by advanced age make it an unflattering portrait of some participants. The director says there was a mixed reaction at its late night screening. 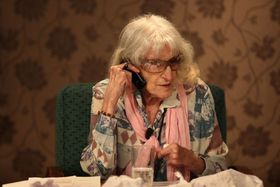 'Team Analog', photo: archive of Ji.hlava Film Festival “It was like as if we screened an episode from some British sitcom, because people were laughing constantly. But it also raised some questions about whether it was moral or ethical. So lots of people told me after the screening not just that it was funny, great and that I somehow show the history of Czech Television and people who have dedicated all they had to it… But some viewers also told me that what I did to them was cruel.”

Viewers will be able to judge for themselves when the documentary appears on Czech Television before the end of 2013, the 60th anniversary of the station’s foundation. Dušek was just one of dozens of local documentarians at Ji.hlava, which, says director Hovorka, attracts, in the main, two categories of people.

“There are different types of people attending Ji.hlava film festival. One is students of universities or secondary grammar schools, who want to educate themselves and experience something new, to discover many new things. The other part of the audience are filmmakers, or producers.”

In fact, many of the latter started out as the former – first travelling down to the city as students and later presenting their own work. Ivo Bystřičan is perhaps typical in this respect.

“As a film school student and then as a filmmaker and director, I’ve had really great experiences at Ji.hlava. The days are filled with films that otherwise I’d get little chance to see. And I think they select really interesting films from around the world. It’s also a place to meet. In those few days, you can discuss so much with different people in the field. In that respect, it’s probably the most important event of the year for me.” 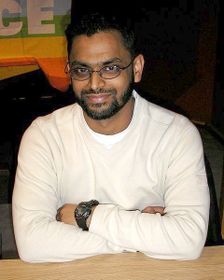 Moazzam Begg, photo: JK the Unwise, CC BY-SA 3.0 One unusual aspect of the Ji.hlava festival is its Inspiration Forum, in which audiences get to meet interesting individuals from around the globe who may have little to do with film. Marek Hovorka explains the thinking behind the sidebar.

“These discussions are really very interesting. This year, for example, we could meet Moazzam Begg, a prisoner from Guantanamo. He thinks in a very sophisticated way about the whole issue of the war with terrorism and so on and he could bring a different opinion, which usually the Western media don’t take so seriously. It’s good for filmmakers but also the audience of the festival to have the personal possibility to meet them, not just to watch these people – because Moazzam Begg, for example, is one of those who appeared in Taxi to the Dark Side, which won an Oscar.”

Such talks are indeed a big draw. Ultimately, however, it is the industry side of the festival that gives it its significance, says critic Vojtěch Rynda.

“It definitely is more important from the global viewpoint. For example, there is a market called East Silver, which serves as a gateway for documentaries from Central and Eastern Europe to the Western world. They provide contacts between TV buyers, co-producers and producers. Another example is Ex Oriente, which is a workshop for people developing their projects. There are pitching forums, master classes, some of which are open to the public. But this part of the festival is usually invisible to the general public.”

As in many parts of the world, documentary making in the Czech Republic currently enjoys a higher profile than ever. Martin Dušek, a two-time winner of the Czech Joy category with colleague Ondřej Provazník, believes that might not be the case if it were not for Ji.hlava. 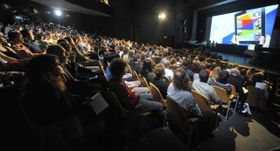 Photo: CTK “Without it I think there wouldn’t be such strong support for Czech documentaries at Czech Television. We wouldn’t have any platform for documentaries here in the country. I think it was at the beginning of this growth of documentaries, because lots of quite good documentaries are made in the Czech Republic every year. It’s more progressive and more interesting maybe than Czech feature films, which are pretty boring, old school and stupid.”

The Czech Joy prize at the 17th edition of the festival went to Petr Hátle’s The Great Night, a portrait of the seedier side of Prague. Andran Abramjan’s To Rule, To Work, To Earn, To Pray, To Collapse received a Special Mention, and the Audience Award went to Show! by Bohdan Blahovec. But at the end of the day the real, overall winner in Ji.hlava may well be the country’s entire documentary scene.