Admirers of the music of Czech composer Antonin Dvorak remembered the great master this week, on May 1st, which marked 103 years since his death here in Prague. A new exhibition has just opened at the Antonin Dvorak Museum in Prague looking at the composer's relation to the Czech capital where he lived for almost 47 years.

"Following Dvorak's Footsteps through Prague" is the title of a recently opened exhibition which invites visitors to take a walk through downtown Prague in search of places connected with Dvorak's life. He lived in seven different houses, some of which are no longer there. It was in Prague that he was confirmed in the church of St Giles, his wedding took place in St Peter's Church and his funeral in St Salvatore's Church in the Old Town. And there are many other places in central Prague tied both to Dvorak's professional and family life. Jarmila Tauerova of the Antonin Dvorak Museum told me more. 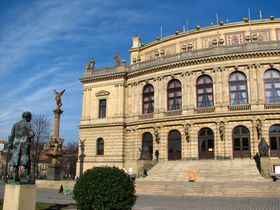 Rudolfinum "The walk starts at the Rudolfinum concert hall, where he conducted the very first concert of the Czech Philharmonic in 1896. We go past the Dvorak monument in front of the building and continue along Krizovnicka Street to St Salvatore's Church. We can stop in Husova Street where Dvorak stayed when he first came to Prague and where he was confirmed in St Giles Church. That's close to Uhelny trh square where his first public performance took place.

"Then we continue along Narodni Street to the National Theatre and Zofin Island. Then via St Adalbert's Church where he played the organ, we continue to Charles Square where he liked to stroll in the morning and listen to the singing of birds. Having walked past the building in Zitna Street where Dvorak lived until his death and which is in bad repair today, we arrive at the Antonin Dvorak Museum. From there we can continue on to Dvorak's grave at Vysehrad cemetery."

The exhibition concentrates not only on the life of Antonin Dvorak but also the broader cultural and political circumstances of the second half of the 19th century. Dvorak was friends with many protagonists of the Czech national revival, such as politician and ethnographer Vojta Naprstek and politician Frantisek Ladislav Rieger.

"On our walk we can also pay a visit to the Memorial to Frantisek Palacky and Frantisek Ladislav Rieger, in the latter's former apartment, with the furniture left as it was when Dvorak used to call. There is also a piano which Dvorak used to play. Last but not least I would recommend visitors to go and see the Langweil model of Prague at the Prague City Museum which portrays Prague just before Dvorak came to the city."

A lot has changed in the Czech capital since Dvorak's times. Two of the theatres where his works were performed have been demolished, only three of the houses in which he lived have been preserved to this day and a railway station in Prague's Vinohrady district where he "train spotted" has disappeared as well. All those places are shown in photographs at the Antonin Dvorak Museum at Villa America in Prague 2. They portray places where the composer worked and spent his free time. On display are also some of Dvorak's personal belongings, such as walking sticks and neckties. The exhibits have been borrowed from a number of museums and also from Dvorak's heirs.

"In Villa America there is a permanent exhibition concerning the life and works of Antonin Dvorak. There are many interesting exhibits, like Dvorak's own fortepiano, Dvorak's gown in which he was proclaimed honorary Doctor of Music at Cambridge and there are also some pictures and furniture which were in Dvorak's household." 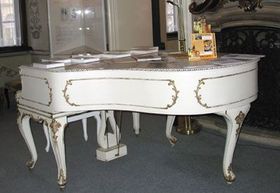 Jan Dehner of the Dvorak museum describes the part of the exhibition "Following Dvorak's Footsteps through Prague" located in Villa America.

"We opened today a special exhibition entitled 'Dvorak's Footsteps through Prague'. It's divided into four parts. The first one is concerned with the expansion of Prague which had become a cultural city from a former provincial city. The second part is concerned with the places where Dvorak lived. There are also documents of places which are connected with Dvorak's professional activities. 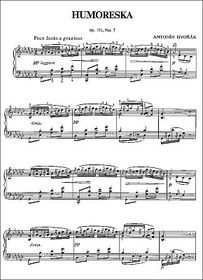 He was a viola player in the Permanent Theatre orchestra. He was an organist and he was later, as a famous composer, a conductor of his own compositions. And of course, there are many pictures of Prague churches where Dvorak went to pray. One part also documents Dvorak's interest in the railways. There are very interesting pictures of the former Franz Joseph I railway station, today's Prague's Main Railway Station."

It is said that it was the sound of trains that inspired Antonin Dvorak to write his short piano piece "Humoreska" composed during his stay in the United States.

For the complete experience, visitors to the Dvorak exhibition in Prague can also enjoy live concerts at the Antonin Dvorak Museum at Villa America. They are held twice a week, on Tuesdays and Fridays, throughout the summer season. The exhibition "Following Dvorak's Footsteps through Prague" will be open until April 14th, 2008.