Punk as an artistic style is usually associated with music and fashion but Prague’s Jaroslav Fragner Gallery now explores punk elements in architecture. The exhibition, featuring structures built over the span of five centuries, looks as what elements of the punk movement can be identified in historic and contemporary architecture in the Czech Republic and abroad. 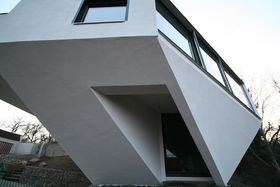 Family house by KSA in Černošice, photo: archive of Jaroslav Fragner Gallery Punk in Architecture is the name of a new exhibition which opened at the Jaroslav Fragner Gallery in Prague’s Old Town last week. The exhibit, accompanied by music by some of the best known English punk bands of the 1970s, presents examples of what the authors consider punk elements in mainly contemporary Czech architecture. Filip Šenk is one of the curators.

“The point was that when architects talk to each other, they sometimes use the phrase, ‘he did it in a punk way’ or ‘he’s a punk for what he did’. We know this language is really superficial but we thought, let’s try to capture it with everything that could be understood by those phrases.”

Some 30 projects by Czech and foreign architects are feature at the exhibit, ranging from Michelangelo and the Czech Baroque master Jan Santini to Frank Gehry, Vlado Milunič, Martin Rajniš, and others. Curator Filip Šenk begins our tour at a large image of a family house which at first glance looks like several brick-and-mortar site sheds put next and on top of each other.

“We have here for instance, this architect, Svatopluk Hudeček. When you look at this building, you can say it has some sort of punk aesthetics. It’s asymmetrical and it’s really not beautiful in a traditional way. The architect focuses mainly on the space, and the shape of the building is not what he’s interested in. That’s why architecture can be ‘punky’ like this.” 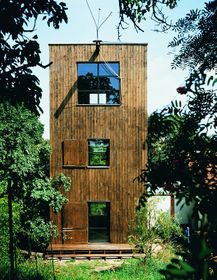 Tower by Alena Šrámková, photo: archive of Jaroslav Fragner Gallery While many of the portrayed buildings and structures do have strikingly “punk” feautres, others are quite conventional, such as a tall wooden tower by Alena Šrámková erected in a garden of a common family home. With building like says, says my guide, you need to consider the intellectual foundations of the architects’ work.

“This is a structure that does not have the punk aesthetics. It is by Alena Šrámková, a famous Czech architect and a living legend. The building looks really classic, it’s very symmetrical, the order is simple, and you can understand the building from all sides. But Alena Šrámková believes that architecture should follow these ethical or moral terms, such as truth.”

You mean architecture should oppose or negate superficiality or something like that?

“Exactly. She’s trying to find something deep in architecture, something deep and fundamental. That’s why she does what she does, it’s really orderly… I don’t know how to explain it.”

Contemporary Czech architecture has often been criticized for its respect to conventions and a lack of vision. Indeed, only a handful of Czech architects can be considered “punk” in the narrow meaning of the term. But some of their projects have become iconic.

“There are few architects that can be described as punk in radical terms. One example is the H3T studio. One of their structures shown here is this little shed called Tea Room. They built on the property of Czech Railways which was not very happy about it, and it had to be removed quite quickly for obvious reasons.

“Another architect, Martin Rajniš faces similar problems. He makes a lot of buildings from wood, and he refers to them as wood storage or wood piles, and says he does not need any building permits. But he’s now engaged in conflict with officials who say, ‘well, this is a building’. And he says, ‘no, no, it’s my wood pile in the shape of a house.” 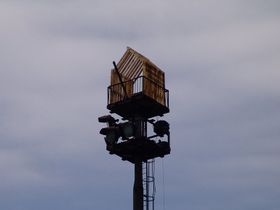 Tea Room by H3T studio, photo: archive of Jaroslav Fragner Gallery One element of the punk movement is a strong emphasis on the do-it-yourself approach, in music just as much as in fashion. In architecture, this principle might be a little more difficult to exploit.

But some areas in the Czech countryside are dotted with sheds, chalets and huts built by their owners. Known as chata in Czech, such weekend refuges were once the imperative for any city dweller. For Filip Šenk, this is a great example of punk architecture.

“Obviously, you can say that the true punk architecture is architecture without architects. Look at all those sheds in the countryside; we have some great examples here as well.

But we want to stick with the so-called high architecture. IN the opening text, I quote the famous art historian Nikolaus Pevszner, who said, ‘A bicycle shed is a building. Lincoln Cathedral is architecture. That’s a definition we want to follow.”

The oldest building featured at the Punk in Architecture exhibition is the Laurentian Library in Florence, designed by Michelangelo in the 1520s. Among the examples of the punk attitude in historic Czech architecture are works by the renowned Baroque architect Jan Santini Aichl. His amazing Church of St John of Nepomuk in Žďár nad Sázavou is now listed as a UNESCO monument.

“There is the Czech Baroque architect Jan Santini Aichel who had a very strong vision of architecture. He combined Gothic and Baroque elements which makes his architecture very unique and unusual. That’s why we decided to include him although we know he was no punk or rebel. But his vision was very strong which made him different from his colleagues at the time.”

In the Czech Republic of the 21st century, however, radical architecture visions might be paradoxically more difficult to materialize. Filip Šenk says that Czechs tend to be rather conservative when it comes to architecture. 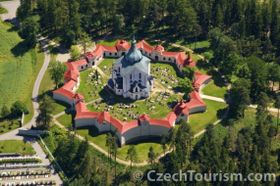 Church of St John of Nepomuk in Žďár nad Sázavou, photo: CzechTourism “Right now, the general taste is rather conservative. If we compare the situation with the 1960s for example, you can see that back then, there were many strong visions of architecture some which we have here. But right now, it’s quite conservative.

“Of course there are some visionary architects and there are some private villas – the most famous of them is Villa Hermína, a pink building with a very strange interior with sloped floors which is very unusual. But you need clients who are willing to pay for such buildings.”

The exhibition Punk in Architecture at the Jaroslav Fragner Gallery runs until December 7. More information can be found at the gallery’s website gjf.cz 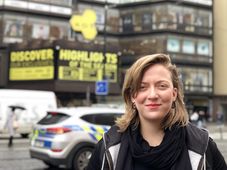 Machonins’ granddaughter Marie Kordovská: I grew up in a “mini Kotva”

Architects Věra Machoninová and Vladimír Machonin designed some of the Czech Republic’s most distinctive modern buildings, including…