Filmy patří lidu (Films Belong to the People) is the title of a series of Socialist Realist pictures that have been released on DVD in the Czech Republic in recent months. These propaganda-filled films are from the 1950s, the harshest decade of the communist era, notorious for its brutal repression, show trials and forced labour camps.

The three movies put out so far in the Filmy patří lidu series are Botostroj (Giant Shoe Factory), Zítra se bude tančit všude (Tomorrow People Will Be Dancing Everywhere) and Rudá záře nad Kladnem (Red Blaze Over Kladno). As films, all of them are dreadful, almost as objectionable for their wooden dialogue and creaky story-lines as for their rousing class war speeches and praise of the Soviet Union.

Markéta Nedvědová is from the company behind the DVD series Levné knihy, which also sells them in its chain of discount shops. I put it to her that these Socialist Realist films are so unsophisticated that many young Czechs today must simply find them hilarious.

“They do, but not just because of the propaganda. The ravages of time are the main reason, because the actors act completely different than actors do today – there is a lot of pathos, and the films as films are simply naïve. Very few of them are of higher quality, though you can find better ones.”

However, not everybody finds these propaganda movies funny. 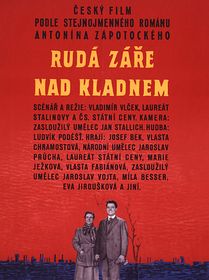 “Most negative reactions come from people who remember these films and who don’t understand that today’s young generation has no way to access them legally. They have an unjustified fear regarding communism, they think it could return in that form…But they’re old films and young people take them as such – they don’t influence their political opinions. They complete your education as regards film, but not politics.”

Nedvědová says those who are particularly annoyed by the DVD series are not actually from the generation that suffered the most.

“The oldest generation, who lived through those times, don’t have the most negative reactions. The most strongly opposed are middle aged people, who didn’t experience the 1950s at a productive age. In my view it makes more sense to listen to those who are even older.”

Botostroj is a clear attack on the Baťa family of shoe magnates, and features a cruel Baťa-like industrialist treating his factory’s workers abominably while dreaming of the great profits he will make if a second world war gets underway.

Rudá záře nad Kladnem documents labour disputes in the inter-war period in the town of Kladno and is based on a novel by written by Communist politician Antonín Zápotocký shortly before he became Czechoslovak president.

Zítra se bude tančit všude, meanwhile, focuses on an overly academic folk music group who develop a love for the real music of the people and overcome the opposition of bourgeois elements to join the Czechoslovak Youth Union, a communist organisation.

But Markéta Nedvědová suggests it is too simple to dismiss these movies as crude propaganda.

“All of the films produced by the company Czechoslovak State Film, which was nationalised in 1948, were propaganda. If we were to look at things that way, we’d have to condemn all the films made throughout that era, until the revolution, which isn’t possible.”

Is there any comparison to be made between these Czechoslovak communist movies and the propaganda films by the Nazis?

“I think that’s a very bad…idea, because films in Nazi Germany were created in completely different conditions than in the nationalised Czechoslovak film industry. There was a limited history of cinematography here, unlike in Germany where they had the brilliant era of Weimar films behind them. Even though many people quickly emigrated, they still had an elite which had already achieved things and were able to continue in their own way. But here inexperienced people got to the top because the field had been cleared.”

Author Pavel Kohout, who penned the theme song and co-wrote the screenplay, appears on the DVD of Tomorrow People Will Be Dancing Everywhere before the film begins. He explains to young viewers how their predecessors, himself included, were seduced by Communism in the dark days after World War II.

“What the great Slovak writer Dominik Tatarka called ‘the demon of conformity’ suited those of us who in those days were emerging from both puberty and the bloody tunnel of history. It was wonderful to be part of a collective which together remoulded history. The driving force was enthusiasm.”

Kohout, who went on to become one of the founders of the Charter 77 protest movement, concludes his film commentary with the following words.

“Its creators, living and dead, soon split into those who continued to live in that lie, and those who decided to refute it in their future lives. The stars favoured the second group, and for that reason you can today watch this film and think, and say out loud, whatever you like about it.”