Contemporary or New Circus has become far better established in the Czech Republic over the years thanks to the hugely popular annual festival Letní Letná (which returns in just a few weeks) and local troupes like La Putyka. But what you might not know is that there is also a centre for contemporary circus in Prague you can visit all year long, called Cirqueon. The centre strives not only to inform about New Circus but takes part in productions and offers youngsters the chance to learn gymnastic and theatrical skills. 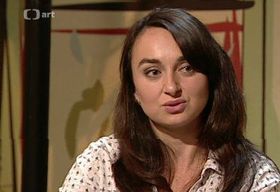 “We launched Cirqueon seven years ago and at first it was a very small project more about our dreams and little by little we built up quite a big contemporary circus centre in Prague, which we are very proud of.”

What was the basis aim? Was it to promote New Circus in this country?

“The main idea was to bring contemporary to Czech audiences and artists. Seven years ago there was only Letní Letná, and also smaller experimental projects but they were about different theatrical art forms. Letní Letná really brought contemporary circus to Prague. It was the first time they brought something else than what people were used to when they thought of the circus. I used to work for the festival and we were always a little sad when it ended. So what we wanted was to found something permanent year round. We wanted a place where people could try and train circus techniques. So we needed a place to provide information and to teach some of the disciplines and promote New Circus in our country.”

“We wanted a place where people could try and train circus techniques. To teach some of the disciplines New Circus requires.”

Where is the centre based?

“In Prague 4, in Nusle, it’s a former factory space and we are 10 minutes from the city centre. There is a small library, we organise workshops for children and also offer a creation centre, inviting artists, emerging artists, to be in residence to produce new work. And we train people in contemporary circus skills and try and get them to think about the circus a little differently. We want young people to gain expertise which they can then use to study abroad because currently it is not possible to study circus arts here. We hope to prepare them to go abroad and when they come back to bring back what they have learned.”

Of course, New Circus is often very physical, there are a lot of acrobatics involved, there is also music and dance but acrobatic and gymnastic skills are often central: I remember when the troupe La Putyka was beginning co-founder Rosťa Novák I think talked about it many times, they weren’t professional, all these people doing stunts on trampolines, and they had to learn how to become pros by themselves… 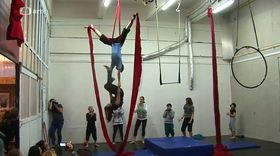 Photo: ČT Art “Rosťa approached the problem by taking a lot of sports people who helped with the trampoline and so on. But they needed to be taught how to be actors, because they weren’t used to being on stage. So they had to learn how to act, and actors with the group had to learn gymnastic skills. That was their approach and that is how we work here in the Czech Republic.”

How young is the youngest to take part in one of your workshops? 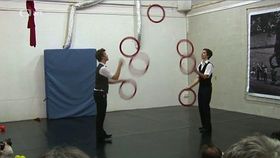 Photo: ČT Art “Three years old, although there it is still more about games. But you can begin learning some key skills at the age of eight. We just had a successful site-specific show at Vyšehrad (the original seat of Czech kings) where we had a mix of students between the ages of 12 and 15. We took six youngsters and mixed them with four adult professionals under the direction of Filip Jevič, a theatre director and great guy, and they worked on a one-hour production based on Czech legends and it worked out really well. Vyšehrad is a key historic site with a lot of mystery. We built it around the space and were so surprised how these young people thought about the material and applied their skills.”

What were some of the skills which they displayed? 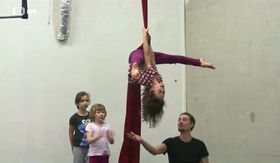 Photo: ČT Art “Juggling, we have wonderful young jugglers, there was a unicycle, a slack line, costumes… you have to keep in my mind we wanted to keep this production simple without any large apparatus in that environment, needed for more complex shows. Here, they worked with the site, the park, itself and theatrical action. It’s a historical park so there were certain limitations.”

It is refreshing to also see young people, hear young voices and not just seasoned pros; it must be very rewarding for them.

“Taking part in productions changes how [young participants] see things. Some grow up with it and it is really an amazing process.”

“It changes how they see things. We are there as they grow and this is really an amazing process.”

“We have our own little festival in February which we do in co-production with Palác Akropolis and there we try and focus on more experimental work, which sometimes get lost in bigger events, so that is what we are planning, but yes, we have a lot planned for the future.”