In today’s Arts my guest is Brian Callaghan, a Prague-based author of a new action/adventure thriller called The Seeds of Cain. Inspired by biblical themes and medieval legend, the novel throws together an unlikely group of adventurers – including the hero John McFadden – to fight an ancient evil. The story takes them from a quiet corner of Prague to an archaeological dig in the Middle East and beyond, and it doesn’t let-up for 400 pages. Brian Callaghan came into the studio earlier this week and the first thing I asked him about was the threat the characters face. 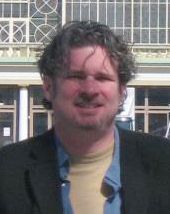 Brian Callaghan “The threat in the book is called the seeds of Cain and basically it’s an ancient weapon that disappeared during the Crusades. It is believed to have been that when Cain made his offering to God, which God rejected, those seeds were planted thereby giving Cain his mark. These seeds were passed down, they were used as destroyers of civilisation and if you’ve studied theology and literature you’ll noticed in the Bible and even in the Koran that civilisation is considered to be evil. Joshua’s trumpet, Goliath destroy civilisation of course and the Old Testament is full of destruction of civilisation. So in my book one last seed left is re-discovered and fed to five teenage boys and they mutate into these monsters called the seeds of Cain. It’s a biblical idea turned into a thriller.”

You have also connected the Cain story to the legend of the Golem...

“Yes. It’s really weird how that came out. I had bought a book about the legend for my son and they talk about how the Golem comes from untouched earth. I had begun to write my novel already and I thought – because I wanted to have Prague in the book – that it would be great way to tie it in. Because the seeds come from the earth and the Golem is made from untouched earth. So I combined them and I think it turned out well.”

Five characters, as you say, consume the seed and go through this metamorphosis, they are changed into these monsters, these giants. You go to great lengths to describe these creatures’ viewpoint many time throughout the novel, how they are reduced to basic instincts, to basic needs. How long did it take you to hammer out exactly what kind of creatures these would be?

“That’s a great question. I don’t remember how the development came about of the creatures becoming non-thinking entities relying on instinct but I know a lot of it comes from philosophy, that man has five basic needs, I knew it derived from that. These creatures have five basic needs, none of them pertain to what we would call civilisation. No computers, no internet, no radio, nothing like that. I wanted it reduced to just shelter, clothing, food, just a completely philosophical creature. 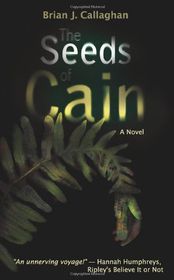 “Getting into their head I just wanted to slow the action down, give myself a breather, and I wanted to explain the creatures. But I couldn’t exactly do it in the sense that a human they meet could describe their behaviour or what they were thinking...”

Humans usually don’t have enough time if they meet one of them!

“Yeah, you are usually trying away or get them out of your head as it were! So my line of thinking was let’s see what they are doing, let’s follow their motions, let’s see if internally they are trying to be human again, if there is something inside of them that will return them to being ‘us’.”

In the book are they responsible for their actions?

“No they are not. They are just entities trying to survive. Their only understanding is that that most animals have that man or civilisation that is the enemy.”

It also strikes me that although the monsters are the cause of fear in the book, it is the actions by the humans that are more questionable – even despicable – than anything the creatures do...

“Yeah, I think that has always been the way since we climbed out of the primordial ooze! Yeah, humanity has to destroy them but the people tasked to do so include a gangster, a weapons dealer, people who have dark or bad sides. Another character is an archaeologist at a dig where religious factions who have been at war for hundreds of years trying to control the history that comers up of the dig. So a lot of the humans in the book aren’t ‘good’. I mean, John McFadden is – he has done redemption, and the character of the Czech psychiatrists is, but some of the others less so. The people haven’t led angelic lives and yes, they are thrust together to fight something that is looked at as evil but is just surviving; unlike us as we manipulate our way through life, committing sins or bad deeds as it were.”

I should describe the monsters a little: for one, they have an ability to detect where others of their kind are and two, like some kind of animal, they can send this wave causing chaos, these waves affecting people in negative ways: to kill or act in a way they normally wouldn’t... Do you think these aspects make them more believable?

“I do. Because I looked at them as destroyers of civilisation: one of things that people have done in history is simply turn on each other. And they do so here via these creatures: all these tensions beneath the surface come up, all these hatreds inside. When the creature passes through, it sets it off and the violence is unleashed. It can be against someone’s wife or even child. People ‘explode’ when these creatures are around: they basically speed-up the process.”

There are many moments in the novel where as a reader you have a sense of dread. There are a few pitched battle scenes, one in Lebanon where Christian and Muslim fight or in fact re-fight an ancient battle where things get really out of control. There is also one of the monsters appearing in a district of Prague, Prague 7, and of course there is the grand finale in Long Island. As an author, how do you approach describing violence?

“You don’t want to go too overboard: there are moments that are graphic – like a torn limb – and obviously there is going to be more of this stuff as you get deeper into the story and the reader knows that. But if you keep showing again and again all this violence, it’s going to lose believability. If you take something like ‘Jaws’ Spielberg waited the full hour-and-half before finally showing you the shark. And here you were sweating through three sets of clothes in an air-conditioned theatre! So the trick is not to overdo it.”

In the book you present several different story lines and jump from story to story, often leaving the reader hanging at the end of a chapter just when things really came to a head. How much satisfaction do you get from that?

“A lot, I really do. I really got excited when people would call me up or email me complaining about the death of a character they really wanted to survive. But loved the way it turned out anyway. And it can really be difficult to hold a reader’s attention. The whole thing wasn’t easy: it was honestly a two or three year experience. I can’t say it a happened like ‘boom’ and there it was and suddenly it was finished!”

But that’s the way it is, right? If it’s good, the reader never learns or realises how hard it is to create. But I was thinking just about how you wrap up the individual chapters and...

“And jump from Lebanon to New York? A lot of that is unconscious: you tell the story as far as you feel it will go at that point and then you say let’s switch locales.”

Writing a novel requires a lot of dedication, you said it wasn’t easy, what was the process (when do you find the time to write) and how did the book get published?

“Concerning writing, I wake up and begin writing at five am every day, then try to read what I wrote later in the day if I can. The first draft of the book was 1,400 pages long and was much too long. I threw everything in there, including the kitchen sink three times over! So then you take stuff out, including a part I like that was 100 pages long that had to go. I think that one thing that makes you an author is the ability to say, without crying too much, I really worked hard on that but it doesn’t work and has to go. And then getting drunk also helps!

“As far as the publishing, I went through createspace, which is an amazon.com company, and they have been really good about it, publicising it. The website Expats has also been great about getting out news of the book, as have friends here and in the US. And readers have enjoyed the book. So I am really relying on word-of-mouth.”

And that’s available at amazon...

The Seeds of Cain mentions or alludes to past adventures of your protagonist John McFadden, but also to the future. Is he alive and well and likely to make an appearance in n upcoming book?

“Everybody asks that, that’s hard. I am a fan of Stephen King and he never uses the same character twice. But there are others who do, who I like as well. But there is always that risk of DieHard, where you ask yourself ‘why does this stuff keep happening to him!’. I love John McFadden, I’ve used him since I was 19, his name is play on the name of the Greek mythological character Phaidon, so yeah, we’ll see.”

Well, there is something inherently cool about a character who has special buttons on his coat that can cut through material to get out of trouble, he’s an adventurer but he’s intelligent, he has a shady past but he’s now a family man; so perhaps all that adds to the attraction.

“I don’t know... yes he does have... I mean, he is cool. He’s based in part on a guy I grew up with and parts are based on myself. Not the cool parts, though, believe me! So yeah, it’s interesting, I love him and I do want to bring him back.”

The episode featured today was first broadcast on March 25, 2011.