In this week’s Arts, our guest is the New York-based jazz pianist and composer Dan Tepfer, who has received great acclaim for his take on J.S. Bach’s Goldberg Variations as well as other projects. Dan Tepfer was in the Czech Republic this week for a special performance at Prague Castle as part of the American Spring. 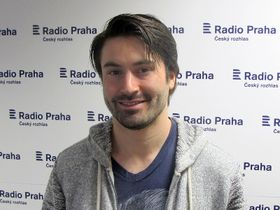 Dan Tepfer, photo: Jiří Němec I began by asking him about music he heard as a kid at home.

“It kind of goes through my family in different ways and there is both a professional side and a non/professional side. But music is definitely present at every level. My mom is an opera singer and was in the Paris Opera course for 25 years; she is retired now but still sings a lot. My father is a biologist but he plays classical guitar. And my maternal grandfather, who was probably the biggest influence musically from my family. He was a jazz pianist and worked on the west coast of the United States, in Oregon, and was an important figure in the Northwest jazz scene, playing with people like Ralph Towner, Glenn Moore and Nancy King, who then went on to do things all over the world.”

You yourself have said you never considered yourself a classical pianist…

“Well it’s true that while I studied classical piano at the conservatory in Paris, where we lived, after I began piano lessons at the age of six, it didn’t take long before I began improvising. I began to think of improvisation as my thing and that studying classical music was for educational reasons.”

We’ll talk about the importance of improvisation for you in a few moments, first though, I understand that you already had a trio in high school – what did you play then?

“It was jazz. We played either my compositions or some standards. You know, growing up in Paris I wasn’t surrounded by peers who were nearly as passionate about jazz as I was. I am sure they were out there, but I didn’t know them. Our drummer was actually pretty good, but I sort of taught our bass player the bass… but we got out there and played some gigs. We were very self-taught how to play jazz and just trying to make some music.”

“I studied classical piano at the conservatory in Paris and after I began piano lessons at the age of six, it didn’t take long before I began improvising.”

I guess nerves weren’t a factor, as you had already been playing and performing on your own?

“They weren’t really, as I have always inclined to performance. Love of music and love of performance are not necessarily one and the same but I have always liked playing live and loved music and I think it is probably because I began at a young age.”

It is interesting that with your past your undergraduate degree was in astrophysics and not music – although your Master’s was. What attracted you to astrophysics?

“Um, I really love that stuff. I always liked science in general: my father but also his father was a biologist… so I also find science a very compelling way of looking at the world. Art is really the perfect counterpart to science because science is all about getting your emotions out of the way and really finding a truth that doesn’t depend in any way on emotion but entirely on rationality.

“And art is about what rings true for each one of us. Art is really about subjective reality and science, objective and both are necessary. They are complementary. I really wanted to study science for a bit at a higher educational level. That said, I was also playing a lot at that time, so it was very natural to do the Master’s in music.”

Do you still pick up Hawking or Briane Greene from time to time? 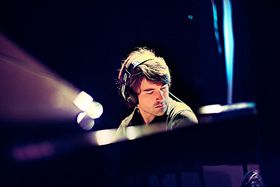 Dan Tepfer, photo: Vincent Soyez “Briane Greene – The Elegant Universe – is great and I love that book. Yeah, I try to follow things when I can.”

To come back to music: in both jazz and classical you have made improvisation a key element. I want to ask specifically about your take on the Goldberg Variations and how that developed because I understand it was a process before you did all thirty.

“That’s right. The Goldberg Variations were something that happened to me, not something which I set out purposely to work with. Studying at the Paris conservatory we did a lot of Bach, Bach was really the centre of my studies there. But I never played the Goldberg Variations because musically the work is advanced, considered his more mature work, something you wouldn’t take on before you were an adult or at least in your late teens.

“When I was 20 I was in a music shop and I picked up the score and began reading it and became more and more interested. When I began playing, I immediately wanted to improvise. They were originally published as keyboard studies – the name The Goldberg Variations is apocryphal, a name given to the work by Bach’s biographer a hundred or so years later.

So really there are studies where Bach presents very clear ideas. It can be a technical idea, it can be an emotional idea, very often it is a rhythmical idea as well, a theoretical compositional idea – every third one is a canon, for example, at a different interval. So, taking those ideas and improvising, making my own pieces from Bach, felt very natural. And I was only doing that for my own pleasure and as a way to learn from Bach.

“In fact it was actually during a tour of the Czech Republic in 2008 that I performed one of the variations plus my own improvisation for the first time. I worked on that and eventually I tightened the project until I was playing all 30. And that was seven years ago now, the recording though was released in 2011.”

“Art is about what rings true for each one of us. Art is really about subjective reality. Science is objective and both are necessary. They are complementary.”

On a basic level, I suppose that improvisation means that no two performances are ever entirely the same, although they can be similar. But there is always that moment of departure. As a professional, what is that moment like for you to depart from the script? Are there still many things to discover, many routes to take?

“Absolutely. I couldn’t do what I was doing if there weren’t. For the last nine years I have performed with one of the great masters of improvisation, Lee Konitz. He is one the people who most strongly made me feel the value of improvisation. It is not just the music but all kinds of factors: the sound of a hall, the vibe of an audience, how you yourself feel in your body that day, and so on. One of the challenges is sometimes to feel comfortable maybe improvising along the same lines as the evening before or even the same way provided the emotion feels right then and there. That is the challenge we are faced with: asking yourself what is the truth right now. Most of the time you will end up playing different music.”

Do you have a period that you come back to as a listener? I was wondering what your take is on the 1950s and ‘60s as a lot of emphasis was placed on live recording as well as improvisation…

“These things vary a lot between learning about music and becoming a musician. As a kid, I used to love Boogie-woogie. I listened to J.P. Johnson all the time and even played some Scott Joplin… and I feel like in many ways of learning about jazz retraced the history of it, starting with some early and was going to say simple stuff but it wasn’t. J.P. Johnson was incredibly sophisticated.

“Otherwise, I really got into Thelonius Monk, who was a huge influence, both at a musical level – the concept he used in composing – and at an artistic level, just the audacity and boldness of his choices which were unapologetic. We are taking late 1940s to the 1960s and early ‘70s. There was be-bop of course and I also was very taken by John Coltrane: the exploratory nature of his work in his late period. To this day I think he is an example of an artist who continued to mature throughout his life and continued to reinvent himself. There are very few artists who continuously reinvent themselves right up to the end. People like Coltrane or Miles Davis.”

“[The Goldberg Variations] are studies where Bach presents very clear ideas. It can be a technical idea, it can be an emotional idea, very often it is a rhythmical idea as well, a theoretical compositional idea... taking those ideas and improvising…felt very natural.”

“From later jazz, growing up I listened to Brad Meldhau, certainly Chick Corea and Herbie Hancock in the ‘80s when they incorporated electric sounds, Keith Jarrett.”

I was watching part of a documentary about Keith Jarrett where he said he learned to improvise from… classical music.

“Bach in his own time was known as a great improviser and it was only well after his death that his reputation as a composer spread. It was the case with Mozart and Beethoven, too. That language that was being used until the 20th century, that is common practice harmony, is very accessible via improvisation, because it is a very structured language. Most of the jazz we play, most of the harmony, emerged from classical music – those are the tools we are using. The rhythmic element of jazz does not but comes from Africa and to a lesser degree from Latin American rhythms, which are themselves a melding of African and Native American rhythms.”

Jan P. Muchow: In Ecstasy of St. Theresa we didn't appreciate the opportunity we had

Born in the then East Germany, musician and producer Jan P. Muchow (48) moved to Prague with his family as a small child and in his…