Like Vienna and Budapest, Prague also was once famous for its café culture. The coffeehouse tradition - which was interrupted by the communist regime that took power after the Second World War - has today a number of followers. To the list of famous cafés that were re-established in the nineties - like Vaclav Havel's old hangout, Café Slavia - has now been added another one - the famous cubist Grand Café Orient on the first floor of the House of Black Madonna.

Even though cubism as an art form was born in France and spread around the world, the Czech lands were the only place where cubism was applied also in architecture. The House of Black Madonna, built by Josef Gocar in 1912, is one of the most distinguished examples of this style, says the current owner of the Grand Café Orient, Rudolf Brinek.

"It is amazing how the house fits to the Old Town environment. Apart from that, the house was unique also because of its cubist interiors, namely in the Grand Café Orient. The café was open in 1912 together with the house - which was originally a department store. But cubism became soon unfashionable and the café disappeared already in the 1920's. It actually wasn't too successful - it never became a real Mecca for artists. But on the other hand, it did become very famous due to its cubist design, and today you find picture of the café in every encyclopedia of architecture." 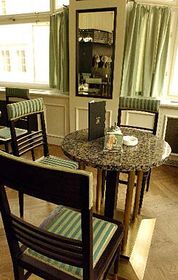 Grand Café Orient, photo: CTK The space of the café was gradually turned into offices, and in a similar way, the rest of the building later also changed. In the 1990s it underwent a sensitive renovation which returned most of the building to its original style. Since then, the House of the Black Madonna has been hosting expositions dedicated to Czech cubism. But the idea to re-establish the original café was realized only recently.

"From the 1920's we found five photographs depicting the original café and two sketches by the architect Gocar - a sketch of a lamp and a bar. So we tried to restore the café according the original design. We hired a special company which produces replicas of cubist objects - for example coat racks and ceramics - to make the furniture for us."

The Café manager, Renata Hendrychova, says she regretted that there were so few traditional cafes left in Prague and wanted to fill the gap. House of the Black Madonna "Our vision was to open a new coffeehouse where people could meet, business people could have meetings, ladies could talk...We ant to offer to our customer's traditional Czech cookies, deserts, pancakes, sandwiches..."

But apart from various delicacies and all sorts of coffee, the café also plans to host cultural events.

"We want to play live music every Friday and Saturday - piano, music bands..."

Do you have any particular favorite place here in the café?

"I assisted during the construction of the café, and I have touched a lot of objects here, so I have some personal feelings for this café. I enjoy sitting on the balcony, drinking a cup of coffee."

So if you are in Prague and desperate for a cup of coffee, or would like to see some cubist art, you can find both at the House of the Black Madonna, just a few steps from the Old Town Square and the Theater of Estates. 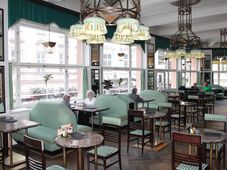 Grand Café Orient in Prague is unique in that it boasts being the only Cubist café in the world. It is located just a few minutes’… Lukáš Houdek is a man of many activities. The coordinator of the government’s anti-racism Hate Free Culture project, he is also a photographer… 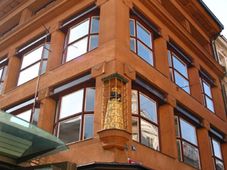 Nestled between busy Wenceslas Square and Prague’s number one tourist destination, Old Town Square, the House of the Black Madonna…