This weekend, the halls of Prague's House of Culture in the district of Smichov will resonate with the sound of wind music. For the 10th year, some of Europe's best amateur music ensembles are flocking to the city to take part in the International Festival of Wind Orchestras. Join me and one of the organisers, Barbora Sladkova, as we discuss the festival and the tradition of wind orchestras in the Czech Republic.

"This kind of music is not for dancing because it is classical music, which is arranged for the big wind orchestra. So, it's not like music from the small brass bands that play entertaining music. This is serious classical music, although there are some instruments missing from a typical symphonic orchestra."

How many members does it have?

"At least 50 members; some have over 100 musicians. The orchestras will take part in a competition. There will be three categories - middle, higher, and the highest and the orchestras are divided into the categories according to their quality. Each category has a compulsory composition, and according to how good they are, they are appraised by the jury members."

Who are the members of the jury?

"The jury is international with a total of five members. Three of them come from the Czech Republic and two of them are from abroad. They are all important personalities in the world of wind music. Major Pieter Jansen, for example, is the Director of Music at the Marine Band of the Royal Netherlands Navy, and Karel Belohoubek is a former conductor of the Czech Central Army Band, which is a prestigious musical body of the Czech Army, which represents the Army and the country not only at home but also abroad."

There will be eleven orchestras in competition...

"Together we have eleven orchestras, which is less than last year but together there are close to 1,000 participants because some of the orchestras are quite big; one German orchestra has around one hundred members, for example. The orchestras come from Germany, one orchestra is from Belgium..."

What about the Czech representation?

Now, the fact that the members of the orchestras are younger, will it help to keep the tradition alive?

"Concerning the average age of the musicians, they are quite young because they are students from music schools but I think that when the musicians finish studying, they often leave the orchestra because they have different hobbies, different problems, looking for jobs, for example, and they have a family, so they don't have the time for it. But they can stay fans. But we will see in a couple of years when they have grown older, whether they will continue to be interested. But as far as the audience is concerned, the listeners are mostly older people. That's definitely the case in the Czech Republic."

And is there an orchestra that has been winning at the festival over the years?

"Yes, the Czech Wind Youth Orchestra Krnov, for example, is pretty good. It has won a few times." 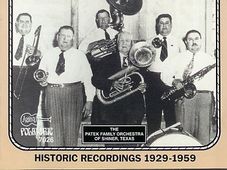 Czech brass band music, deep in the heart of Texas

“Texas-Czech, Bohemian-Moravian Bands: Historic Recordings, 1929-1959” is a wonderful compilation featuring groups such as the Joe… Surrounded by railway sidings and industrial estates, it's easy to get the impression that Kolín is simply a town travellers pass…

Surrounded by railway sidings and industrial estates, it's easy to get the impression that Kolin is simply a town travellers pass…