Words, words, words… The United Nations and the 1968 invasion

In this week’s From the Archives we continue our look at how radio covered the Soviet-led invasion of Czechoslovakia in August 1968. Today we follow the part played by the United Nations. Within just a few hours of the tanks crossing the border, the UN Security Council met for a special meeting to discuss what to do about the invasion. Czechoslovakia’s Ambassador to the UN, Jan Mužík was unequivocal: “We categorically request the immediate withdrawal of the armed forces of the five states of the Warsaw Treaty and full respect for the state sovereignty of the Czechoslovak Socialist Republic.”

But the Soviet Ambassador Jacob Malik was predictably defiant, repeating the mantra that the invasion amounted to “fraternal assistance”.

“Attempts by the forces of imperialist reaction to meddle in the internal affairs of the Czechoslovak Socialist Republic, and to put a wedge between socialist countries will not be tolerated.”

The meeting continued the next day, August 22, when several countries proposed a resolution condemning the invasion. On one of the rare occasions in its history, the United States - through its UN Ambassador George Ball - expressed solidarity with a socialist country:

By this time there was also growing concern for the wellbeing of the Czechoslovak leadership, part of which, including Party Secretary Alexander Dubček, had been swept off to Moscow. The British UN Ambassador Lord Caradon spoke up, adding to the drama of the meeting:

The Soviet Ambassador was evasive. He replied with a question of his own, accusing the Western countries of hypocrisy: “Who drowned the villages and cities of Vietnam in blood?” He also insisted that the troops had been invited into Czechoslovakia:

“The armed forces of socialist countries, as is well known, entered the territory of the Czechoslovak Socialist Republic on the request of the country’s leaders.”

The Security Council meeting continued for a third and unprecedented fourth day. At this point Czechoslovakia’s Foreign Minister, Jiří Hájek, joined the debate. He had been out of the country at the moment of the invasion, so he was able to travel to New York to deny Ambassador Malik’s claim in person.

“No such demand was ever made… This is an act of the use of force which cannot be justified by any reasons.”

The episode featured today was first broadcast on February 5, 2009. 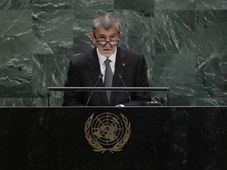 Babiš at UN: Jobs must be protected as states meet climate targets

Andrej Babiš highlighted environmental issues in an address to the UN General Assembly, saying the fact many states don’t fulfill their…