We quite often hear it said that in the run-up to World War Two, no-one quite realized the scale of the threat that Nazi Germany posed in Europe. When Hitler set his eyes on Czechoslovakia, there were plenty of politicians in Western Europe who really seemed to believe him, when he said that the Czech borderlands, the so-called Sudetenland, were his “last territorial claim”. But Czech Radio’s archives show clearly that here in Prague there were also plenty of people who were only too aware of the worldwide menace that Hitler posed. As Britain and France pursued their policy of appeasement towards Germany, these were voices that, tragically, remained unheard.

Here, for example, is the Prague left-wing journalist Kurt Konrad, who on the September 17 1938, a few days before the Munich Agreement was signed, hit the nail on the head in describing Hitler’s real ambitions for the Czechoslovak Republic.

“According to his conviction, Hitler wants the whole of Czechoslovakia, not only the Sudetenland, and no concessions in the Sudeten German question could satisfy the ever-increasing appetite of the Third Reich, as long as these concessions were to preserve the sovereignty and unity of the republic. He means to weaken and crush the republic, and turn it into a vassal state of Germany. According to his opinions, the airplanes constructed in the highly efficient Czechoslovakian factories, should appear in the service of the Third Reich above London bearing deadly freight.”

Kurt Konrad was spot on. Within two years bombs were falling on London, and Hitler really did use Czech armaments – and in particular tanks - in his invasion of Western Europe, weapons that he had gained without a shot being fired. Kurt Konrad paid a high price for the clear-sightedness. He was arrested just months after Nazi troops fulfilled another of his predictions and stormed into Prague in March 1939, and he was to perish in a Gestapo prison in Dresden in 1941.

Another prominent Czech who had no illusions about Hitler, was the professor and historian Jan Slavík, who spoke on Radio Prague on 29th September 1938, pointing out the hypocrisy of Hitler’s claims to be defending the civil rights of Czechoslovakia’s German minority. 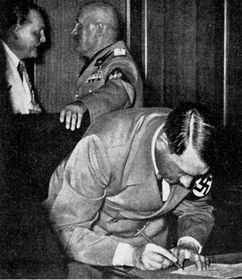 Adolf Hitler signs the Munich Agreement “The opinions are being voiced today that Germany is fighting for the right of self-determination for the German people. They have to be answered as follows. He has no right to expound these high principles who is treading on them by the theory of the supremacy of his race, by his theories of master and slave nations. Our conscience is clear. Our democratic state has been and is ready to give equal rights to all its nationalities, but on the other side, those who want to make use of the right to self-determination against us have no moral right to do so, until they proclaim before the whole world the principle that they recognize the equality of all nations as well as their right to live. Until they disclaim the programme of violent conquest of the territories of other European nations as it is outlined in Adolf Hitler’s book ‘My Struggle’, their excited shouting about the rights of their nation remains a mere sound.”

By a bitter irony, Professor Slavík’s warning was broadcast on the very same day that Hitler and Mussolini, and the British and French Prime Ministers, Neville Chamberlain and Edouard Daladier, met in Munich to grant Hitler nearly a third of Czechoslovakia’s territory. Sadly Mr Chamberlain was not one of those who listened to Radio Prague’s English broadcasts!