The unresolved mystery of the death of Jan Masaryk

“We are a small country with a great tradition of freedom. We shall not give it up.” These are the words of Jan Masaryk, the son of Czechoslovakia’s first President Tomáš Garrigue Masaryk, addressing American servicemen in Plzeň in a tone of great optimism in November 1945. During the wartime occupation Masaryk had served as Czechoslovak foreign minister in exile in London, and he remained in the post after his return home, deciding to stay on even after the communist coup of February 1948. His immense popularity meant that the communists put up with his presence, although his pro-Western views, reinforced by the fact that his mother had been American, were totally at odds with the rest of the government.

Masaryk himself was tormented by doubts about his decision, but when he spoke briefly to Czechoslovak Radio a few days after the coup on March 5 1948, he did not let his fears be known. He had few words, seeming to be in a great hurry, but he did say that he was looking forward to working in the new government.

Five days later Jan Masaryk was dead. His body was found, dressed in pyjamas, under the bathroom window of his apartment in the Foreign Ministry. Subsequent investigations have all concluded that it was suicide, but suspicions linger that someone, maybe in Moscow, maybe in the new government itself, wanted him dead.

With more than a dose of cynicism, Czechoslovakia’s new Stalinist rulers turned Masaryk’s funeral into a huge public event, with a live broadcast of his interment at the family grave in Lány, west of Prague. Among those who spoke at the funeral was the man who took Masaryk’s place as foreign minister, Vladimír Clementis. Ironically Clementis had played a decisive role in organizing the communist coup that – directly or indirectly – had led to Masaryk’s death. 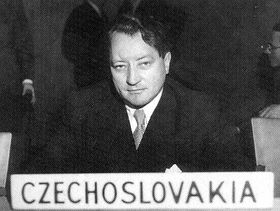 Vladimír Clementis “He loved people and trusted them,” Clementis stated. “In many ways we might say that he was too trusting.”

Two years later, these words were to come back to haunt Foreign Minister Clementis himself. The revolution was beginning to eat its own. In 1950 he was forced to resign, accused of “bourgeois nationalism” and was hanged after a show trial in December 1952. Subsequently his image was carefully removed from the most famous photograph of the 1948 coup.

The episode featured today was first broadcast on October 2, 2008.

Great-niece: If Jan Masaryk planned suicide, he would have done it elegantly

The murky death of Jan Masaryk in 1948 has been back in the news recently, after the discovery of fresh evidence prompted the reopening…