In November 1945, six months after the end of World War II, the units that had taken part in liberating Czechoslovakia began their official withdrawal. Various ceremonies were held, first on November 15, to say farewell to the Red Army troops, who had fought their way in bitter fighting through Slovakia all the way to Prague. Then a few days later, on November 20, the withdrawal began of the American units that had liberated Western Bohemia. 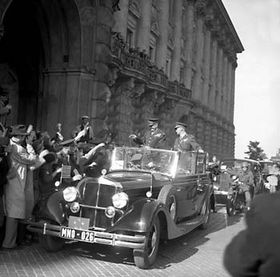 Dwight Eisenhower (left) in Prague, 1945, photo: CTK The wartime Allied Supreme Commander, Dwight Eisenhower, came to Prague, where he was given an enthusiastic welcome.

“This is my first visit to Prague and I’m very honored to be here. I’ve had the greatest reception, and if the people of Prague feel as good about this meeting as I do, then we’re all very happy.”

Czechoslovakia’s President Edvard Beneš and Foreign Minister Jan Masaryk, were sincere in their warmth towards the American troops. Jan Masaryk, the son of Czechoslovakia’s first President Tomáš Masaryk, was himself American on his mother’s side, and Edvard Beneš had never forgotten the role that President Woodrow Wilson had played in the foundation of Czechosloavkia back in 1918. So when Jan Masaryk said farewell to the American troops on a chilly late November day in Plzeň, the atmosphere was particularly warm.

“General Harmon, Mr Ambassador, officers and soldiers of the American Army! I’m going to say a few words in English. I’m not going to be long – it’s too cold for long speeches. During the last war [WWI], Woodrow Wilson, your great president, took a very definite stance about the settlement of the war and the establishment of peace. He failed. He did not fail personally, but politicians made the realization of his ideas impossible. Woodrow Wilson helped to discover Czechoslovakia. Dwight Eisenhower and Jan Masaryk, photo: CTK “It took just 20 years and another war, infinitely more cruel than the last one, was upon us. During this war, Franklin Roosevelt, who knew very well from the beginning that America was going to be in it, and prepared your great democracy for it, was equally helpful in rediscovering Czechoslovakia – from the haze, fog and dirt of Munich [the Munich Agreement]. It was my never forgotten privilege to discuss with him the war and peace during my frequent wartime visits to the United States of America.

“You young Americans rediscovered Czechoslovakia a few months ago. You came at the moment of the greatest emergency the lovely land of Bohemia has ever experienced. You helped to free us and you stayed while we were catching our breath after seven years of hell, which were longer than seven times seventy years. Now you are about to leave us and I am here to say thank you and God bless you! ‘Westward Ho’ is your programme now. You will be going home and how true the song is: ‘There is no place like home.’ May I thank you in all humility for making it possible for me and my colleagues to come home. I was homesick for seven years, and homesickness can hurt more than any other affliction. Soon you will be passing that symbolic lady, the Statue of Liberty. Will you please tell her for us that we too believe in liberty, that we refuse to live without liberty. Our ways may be different. We are a small country with a great tradition of freedom. We shall not give it up. God bless America and you her sons, who fought so well to save the world. You did a swell job. God bless you!”

There was a tragic irony to Masaryk’s words about Czechoslovakia refusing to live without liberty. Just over two years later, the Communists staged a political coup in the country, and two weeks later Jan Masaryk was found lying dead in the courtyard of the Foreign Ministry.

The episode featured today was first broadcast on July 31, 2008.

Great-niece: If Jan Masaryk planned suicide, he would have done it elegantly

The murky death of Jan Masaryk in 1948 has been back in the news recently, after the discovery of fresh evidence prompted the reopening…