Kitsch wins through: pop music in Czechoslovakia after 1968

The 1960s had seen a thriving musical scene in Czechoslovakia, which had been broadly tolerated by the regime, especially during the 1968 Prague Spring. With the political clampdown of the early 70s, rock and pop music were also to suffer. But this was a gradual process, and, initially at least, the communist authorities were careful not to go too far to alienate young people.

Here is the head of news and current affairs at Czechoslovak Radio Květoslav Faix, in 1975, sounding unintentionally comic, as he tries to explain, why the regime should not reject pop music outright.

“I sometimes meet old fellow comrades who say to me, ‘What’s that dreadful racket?’ And I reply, ‘My dear comrade, what do your own children listen to?’ And they say, ‘That sort of music.’ And I say, ‘Look, we want young people to listen to us. Shouldn’t we take advantage of the opportunity? Why don’t we do our own songs with that jangling noise that young people like so much – but putting our own words and ideas into them?”

The country’s biggest annual pop music festival, the Bratislava Lyre, had been going since 1966 and it carried on throughout the years of normalization. Radio Prague’s Olga Szántová was there to report on the event in August 1970, and her programme ‘Magazine of the Air’ featured the music of some of the bands. 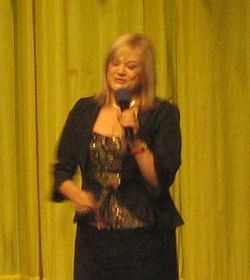 Marcela Laiferová in 2006, photo: Martinka1980, CC 3.0 license “That was one of the many Czechoslovak ‘beat’ groups, a group called – believe it or not – ‘Shut Up’, and the soloist was Jiří Helekal – Czechoslovak teenagers playing and enjoying much the same music as their counterparts in the rest of the world.”

Olga was not entirely impressed by what she heard at the festival. It is worth remembering that by 1970 many of the most popular Czechoslovak singers, who had been stars at the Bratislava festival before the Soviet invasion, were banned from performing in public:

“Generally speaking, I do think that this year the foreign guests were on a much higher level than the Czechoslovak participants, but since the Bratislava Lyre is first of all an annual competition of Czech and Slovak pop songs, I cannot ignore that aspect of the event. So, here goes: This year’s context was marked by a noteworthy absence of top Czech and Slovak singers, a fact that gave the younger and less popular set a chance in the limelight. I guess that is a good thing and perhaps the future of our pop music will benefit from it. But then, this was no singers’ competition it was the songs the jury was judging, and as the best of those submitted it chose this one called ‘Words’: ‘I am looking for the words the wind has blown off into the streets, I am waiting who will now come to caress me.’ Those are part of the lyrics sung by Slovak singer Marcela Leiferová in the winning song of the Bratislava pop song festival.”

As we can see, while the standard of the music may have been in steep decline after 1968, kitsch was alive and well in 1970s Czechoslovakia. But the regime’s tolerance of popular music was severely limited, as we shall be seeing in next week’s From the Archives.

The episode featured today was first broadcast on March 26, 2009.