The expression “jako kůl v plotě” – “like a fencepost” - entered Czech folklore in the summer of 1989. The date was July 17 and Czechoslovakia’s Communist Party chief Miloš Jakeš was meeting local party activists in the small West Bohemian town of Červený Hrádek. The authority of the party was being increasingly challenged, and thousands had signed Charter 77's appeal for greater recognition of human rights, "Několik vět" (a few sentences). Not realizing that he was being recorded, Jakeš complained bitterly that he felt he was standing on his own and unsupported “like a fencepost”. Soon the recording had circulated around the country and abroad, and Jakeš, who was already famous for his malapropisms – he once mixed up the words “boiler” and “broiler” - found his authority shaken still more. 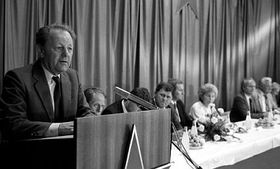 Miloš Jakeš, photo: CTK At the time Jakeš was facing growing criticism for his treatment of dissidents. Václav Havel had recently been released from prison, but at Červený Hrádek, it was Alexander Dubček, the leader of the reforms of two decades earlier, who was the target of Jakeš’s most vitriolic condemnation:

“He was thrown out of the party, because he was incompetent. These days he’d love to go round the world, and turn himself into a messiah, together with the oddest bunch of characters. He was one of the first who went to congratulate Havel when we let him out of jail. He calls himself a communist, but when Cardinal Tomášek had his birthday, he actually went to congratulate him in person. Can we still call this socialism?”

Alexander Dubček himself commented on Jakeš’s words in a phone interview shortly afterwards for the Czechoslovak Section of Voice of America:

“Well, that’s relevant not just to the present day, but it was also a central part of what were trying to do back in 1968. You can be a reform socialist but still be friends with someone who has different views.”

Dubček was refused a visa to travel abroad, and it was while defending the decision to stop him travelling, that Miloš Jakeš uttered the unforgettable phrase about the fencepost. Here it is in context:

“That character Dubček wants to go gallivanting all over the place. He wanted to go to Italy again. We didn’t let him. He wanted to go to Spain. We didn’t let him. Ambassadors keep pestering us. Prime ministers write. The president of the Socialist International - that Willy Brandt - keeps writing. They’re all intervening. These are complicated problems, and that’s just why we need support from below, so we can say – it’s not just us, it’s what the people want, we’re just fulfilling their wishes And not that we’re just standing there like a fencepost, without a murmur of support for what we’re doing, letting them turn the people against us.” Czech political parties and various other groups held events on Monday marking May Day. While the Communists were the first to celebrate International… 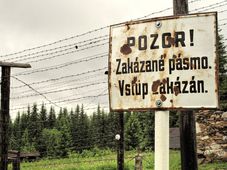 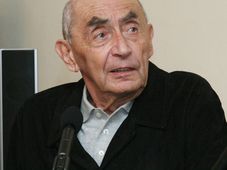 Czech-born author, journalist and Radio Free Europe broadcaster Milan Schulz died in Munich on Monday at the age of 83. He emigrated…