With the fall of communism, it was not long before foreign investors began taking an interest in Czechoslovakia. This ranged from huge industrial multinationals to young college graduates, who arrived in Prague with backpacks in the early 1990s, and happened to spot a business opportunity. Many burned their fingers; some made a quick buck and disappeared, and others settled down and stayed here for good. In 1991, Radio Prague interviewed a few of these pioneering investors.

At one end of the scale was the US nuclear energy giant Westinghouse, which went on to win a huge tender to complete the Temelín nuclear power plant in South Bohemia. The director of its Czechoslovak operations was Gabe Toth:

“This country is one of the stronger economic and industrial countries in the old Eastern Bloc. The capabilities of this country are exceptionally strong, and we have an interest in joining with those capabilities to explore ways we can mutually benefit in pursuing business worldwide.”

Interviewed for the same Radio Prague programme in 1991, Michelle Vincent from New York City spoke of her experiences on a rather more modest scale. She set up a travel agency, providing private apartments and rooms for Western visitors to Prague.

“I came over last June just as a vacation, and we weren’t really sure what we were going to find in Czechoslovakia, and then we found this incredibly beautiful city. I think another thing that was very exciting about it for a business person was that everything was just beginning. If you looked around you could find at least 50 different kinds of businesses that you could start. It was a tremendous advantage coming from the West, knowing how to do marketing, how to advertise your product…”

But foreigners doing business in Czechoslovakia did not always find it easy. At the time, Gabe Toth of Westinghouse, rather diplomatically put it like this:

“The old rules are going by the board and the new rules are yet to be defined, and they’re fluid and not well structured. And therefore it becomes very difficult to know where you are in this whole process at any one time, and very difficult to understand what the process is.”

And here is Michelle Vincent again:

“If you can afford to just leave everything behind and come here, it really is an incredible opportunity. But you suffer. You go through a year of hard times. My suggestion to someone coming here would be first of all to spend some time in the country and try to develop a good relationship with a few Czech citizens, to determine someone that you can trust, and someone that has some sense of the logic of business.”

One of those pioneers, who is still in Prague nearly two decades later is the British property developer Nicholas Kirke, who set up a real estate company almost immediately after the fall of communism. In 1991, Radio Prague’s John Tregellas spoke to him about the emerging Czechoslovak property market:

J.T: “…The prices seemed very cheap to me. 50,000 pounds for a block of nine flats in central Prague, 5,000 dollars for a country cottage set in its own orchard. Nicholas Kirke does not agree:”

N.K.: “The first reaction of people coming to Prague is that everything here is very expensive and overvalued. That’s the first reaction. They’re being asked to pay a lot of money for property that’s in poor condition and fully tenanted… I have moved tenants, but it’s very difficult to move tenants who can only afford to pay Czech crowns in rent. People generally feel that Prague is grossly overpriced and in most cases I would agree. But foreigners realize, as I do, that Prague is going to be the centre of a very exciting Europe.”

Talking to Radio Prague back in 1991, Nicholas Kirke predicted, quite accurately, the property boom that was later to sweep the Czech capital. But back in the early 90s, things really were much more complicated, as he illustrated with an example: 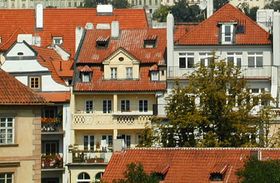 These days, getting a lock mended is a great deal easier, but if you want to buy an apartment block in the centre of Prague you will need a very full wallet indeed - even after the credit crunch.

The episode featured today was first broadcast on October 8, 2009.