February 1948: a new political order enters by the back door

In last week’s programme we heard about the Communist-led government that emerged from Czechoslovakia’s elections in May 1946. Although the number of parties allowed to take part had been limited, Czechoslovakia was still a multi-party democracy. But the governing coalition was an uneasy one, with the non-communist parties pushed into ever greater isolation, while the communists, with the weight of the Soviet Union behind them, gained an ever stronger foothold. 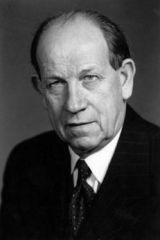 Antonín Zápotocký The situation came to a head in February 1948. The Justice Minister, Prokop Drtina, who was not a communist, found out that eight regional police chiefs had been sacked and replaced by men loyal to the party line. The non-communists in the government insisted that until the decision was reversed, they would not attend cabinet meetings. The communists’ response was to launch a huge propaganda campaign, some elements of which survive in our archives. Here is the head of the Revolutionary Trade Union Movement, Antonín Zápotocký, railing against minister Drtina:

“We know how difficult it is for workers to produce good products when their boss is no good, [loud applause] and it is harder still for judges to pass judgment in the spirit of our people’s democracy and our new legal code, when the man in charge of justice is trying to sabotage people’s democracy.”

In Zápotocký’s speech we can already hear the aggressive tones of the new political order. In a desperate attempt to turn the tide of events, the non-communists in the government resigned, confident that their resignation would not be accepted by President Edvard Beneš.

Klement GottwaldBut the communists reacted immediately by occupying the ministers’ offices, and on February 25th President Beneš unexpectedly accepted all the ministers’ resignations, inadvertently completing the coup that was to lead to forty years of communist rule. After seeing Beneš at Prague Castle, the Communist Party leader, Klement Gottwald, made the following historic declaration from a balcony on Wenceslas Square. He declared that the president had approved a new communist government under his leadership:

“I have just returned from the Castle, from seeing the President of the Republic. I can inform you that the president accepted all my proposals, exactly as they were laid down.”

Gottwald’s words were greeted by a huge and enthusiastic crowd. Czechoslovakia’s experiment with democratic socialism was over. Four months later, President Beneš resigned, his health already failing, and three days after the coup, the former Justice Minister, Prokop Drtina, attempted suicide by jumping from a window. He survived, and in a later show trial, a communist court sentenced him to fifteen years in jail.