In From the Archives this week we carry on where we left off at the end of July in our chronological journey through the Czech Radio archives. We had reached the point just after the end of World War Two; after the initial euphoria, the hard work of rebuilding the country began: not least at the Czechoslovak Radio building itself, which had been shot to pieces in the Prague Uprising and received a direct hit from a German aerial torpedo. 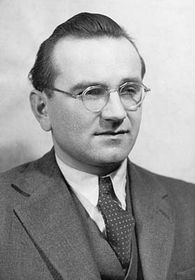 “Congratulations to all my radio colleagues for what we have achieved through our work together, and for working to heal the wounds left by the German enemy. Thanks to all the workers, craftsmen and other colleagues who have helped to renovate our main entrance. Long live Czechoslovak Radio and our beloved republic!”

Another step on the road to normality was the re-election in June 1946 – with the overwhelming support of parliament - of Edvard Beneš as president. He had spent six years as president in exile in Britain and in the months immediately after the war had ruled by decree. For the first time radio broadcast the president’s swearing-in ceremony live.

“I swear on my honour and conscience that I shall work for the wellbeing of the republic and her people and observe the constitution and other laws.”

Some places, like the villages of Lidice and Ležáky, which had been wiped off the map during the German occupation, could never return to normal. But even in Lidice, the widows of the nearly two hundred men who had been murdered were gradually returning home, and the two pilots from the village who had served in Britain’s Royal Air Force during the war, also came back. One of them, Josef Horák, who had lost seventeen members of his immediate family, brought with him his young English wife and their two children. They took part in a special Christmas broadcast, on Christmas Eve 1946.

Wynne Horák: “Come over here, dear. We want you to say a few words into the microphone.”

Child: “What is a microphone?”

Wynne Horák: “If you speak into it, people who are not in this room can hear you.”

Child: “Merry Christmas to you, the big wide world!”

Behind the illusion that Czechoslovakia was returning to normal, other things were happening that remind us that times were still turbulent. To this day, the expulsion of almost the entire German-speaking population of Czechoslovakia in the immediate aftermath of the war remains highly controversial, and there were also many signs that the country’s democracy was far from secure. But more of that in the coming weeks. 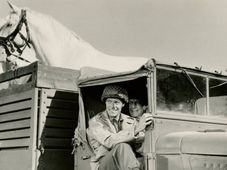