A bizarre speech by an ailing president

The wartime president of occupied Bohemia and Moravia, Emil Hácha, is one of the saddest figures of Czech twentieth century history. An elderly academic, he only agreed reluctantly to become head of state after Edvard Benes resigned over the Munich Agreement in 1938. He made the tragic mistake of remaining in office when Hitler marched into the country six months later. Hácha’s hopes of preserving at least some of his country’s independence were gradually worn down, and as his health failed, he eventually became nothing but a puppet of the Gestapo.

On March 15 1944, to mark the fifth anniversary of the occupation, President Hácha delivered a speech on Prague radio. It was only meant to be a brief message, but by then Hácha was already sick and broken, scarcely able to play even the grotesque ceremonial role he had been left by the Nazis. The radio reporters who went up to the castle to record the speech had a great deal more difficulty than they expected.

The entire recording is preserved, including several failed attempts by the ailing Hácha to speak coherently. On several occasions his voice breaks down completely. At one point the reporter, Josef Cincibus, cautiously interrupts the president.

“That was fine,” he says diplomatically, “but perhaps, Mr President, it would be a good idea to read it again – a bit louder and as if you really felt what you were saying.”

Cincibus goes on to demonstrate, by reading a couple of sentences. This bizarre scene is repeated on several occasions, until, on the eleventh attempt, the final version is recorded. The speech goes as follows:

“Dear fellow citizens. Five years is not a long time in the life of a nation, but enough to destroy it for several generations. We have seen this in the example of some other small nations. Sometimes there is only a moment between the path of life and the path of death. It was at one such moment that we decided that our future life lay within the Greater German Reich. Since that time we have faced many obstacles, but we have managed to remain intact. I have noticed that as a nation we could even be said to be rising in terms of our inner strength. This is the most important proof that we followed the right path. I ask you all to continue, under all circumstances, to be faithful to this country’s leaders, to the Reich, whose victory will bring you and your children a happy future. May God’s goodwill never leave us.”

But the Reich’s days were numbered. Just over a year later and less than a week after the end of the war in Europe - on May 13 1945 - Emil Hácha was arrested at the presidential castle in Lány and taken to Prague’s Pankrác prison. There he died two weeks later, on June 27.

The episode featured today was first broadcast on July 3, 2008. 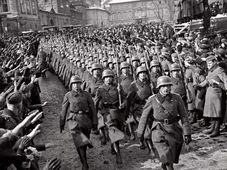