Hello and welcome to Radio Prague's ABC of Czech and its current culinary series. Today we'll be looking at Czech dishes with strange names.

These are English translations of recognised Czech dishes but their names are just metaphors, and in fact the meals have little material connection to the names.

Take for example the Spanish birds - španělské ptáčky. They are neither birds, nor do they come from Spain. They are small beef rolls, admittedly the size of a bird, stuffed with a slice of smoked sausage, a gherkin, a quarter of a boiled egg and some mustard added to taste.

Another off-putting sounding dish is the Moravian sparrows - moravští vrabci. As you can guess, the Moravians don't shoot poor little sparrows to rustle up some lunch. The dish is a variety of good old Czech vepřo-knedlo-zelo, that is roast pork with sauerkraut and bread dumplings, the sparrows being small chunks of pork meat. 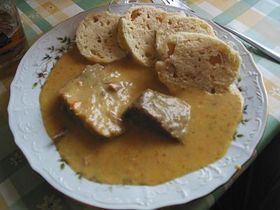 Svíčková omáčka Don't get confused if you see a meal called Candle sauce - svíčková omáčka on your menu. It has nothing to do with candles. The name comes from the type of meat that was originally used to prepare the meal - beef tenderloin - which is called svíce or svíčková in Czech, probably because of its physical resemblance to a candle. Today it's usually some less expensive part of a cow, baked with root vegetables which are then blended and cream can be added to the sauce. It's then served with dumplings and preserved cranberries.

Chopped pipes - sekané potrubí is simply a colloquial name for macaroni. Cats' tongues - kočičí jazýčky are thin chocolate bars, rotten eggs - vejce na hniličku are eggs that are neither soft-boiled nor hard-boiled. A rabbi's pocket - rabínova kapsa is certain to put off any rabbi - it's usually pork meat stuffed with blue cheese and swimming in a cream sauce. A little coffin - rakvička is a type of dessert. And finally, hairy dumplings - chlupaté knedlíky are actual dumplings whose dough is made from both boiled and raw potatoes, eggs and flour. They are kind of rough on the surface, hence the name.

I've used up my imagination for today but there are certainly many more Czech dishes with funny names. If you know some, please let us know and we'll look at them in more detail in one of the future editions of the ABC of Czech here on Radio Prague.