To have something under the thumb

Hello and welcome to a fresh edition of SoundCzech, in which you can learn interesting Czech idioms with the help of song lyrics. Today’s song is by the singer songwriter Jaromír Nohavica. It’s called Kdybych byl ředitelem zeměkoule – If I was Director of the World and the phrase to listen out for is mít všechno pod palcem: 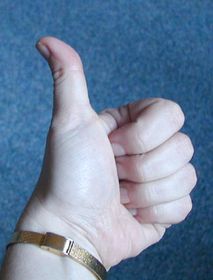 Photo: archive of Radio Prague The phrase pod palcem literally means to have something under the thumb and it is used to describe that someone is in control or in charge of things. The singer imagines what it would be like he was the director of the universe and had everything under his thumb.

There are plenty of finger-related idioms in the Czech language. When someone is in charge, we could also say that he has long fingers – má dlouhé prsty, a phrase that implies that someone has a strong influence. Such people usually don’t have to lift a finger, nemusí hnout prstem, because they have other people working for them. And they usually lead everyone around by the nose or, as we say in Czech, obtočí si je kolem prstu, which literally means that they turn other people around the finger.

Czechs also use the phrase mít v něčem prsty, to have one’s fingers in something, which means that someone is involved in something. The closest English equivalent would be to have a hand in something. Sometimes you can also make a mistake, or as both the English and Czechs say: burn your fingers, spálit si prsty.

And I am afraid that’s all we have time for today. I hope you will have all of today’s phrases at your fingertips soon, or, as we Czechs say, you have it in your pinkie - máte to v malíčku. Thank you very much for listening and until next time, nashledanou!